...all good things must come to an end on a giant record player. Wait, isn't that the way the saying goes? Well, it should! 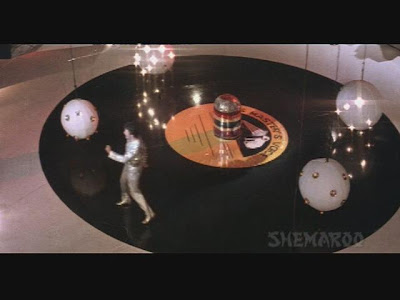 Earlier in the week, I talked about 1980's Karz, and specifically the "Om Shanti Om" number, in the context of Rishi's ability to turn on the sunshine. In the Kapoor biography by Madhu Jain (problematic in many ways, but we'll take whatever reference materials we can get), Rishi is shown as a fairly complex personality: moodier, touchier, less friendly and outgoing than the other Kapoors. Unlike his screen persona, he claims to be completely unromantic in real life. As far as acting is concerned, it sounds like he went into the family business by default: "I didn't make a great effort. I just did what I was told. My father used to show me what to do and I did it." (The Kapoors, page 294) Although I think that's a serious underestimating, it does say something about how he's viewed his career.

Sometimes, too, I ponder the fact that Bobby features a character in rebellion against his cold, apparently unloving father -- with the actor directed by his real-life father. 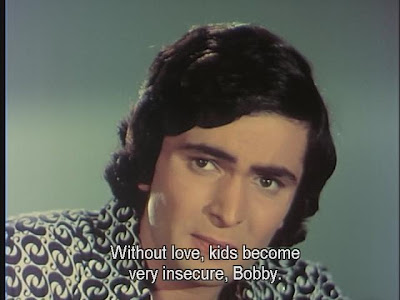 In Karz, his Monty is an orphan who's been "adopted" by a rich man, even given his surname, but it's really all a sham to exploit Monty's singing talent, when all Monty really wants is love, and a family. "Don't call me Daddy!" the old man keeps snapping. Hmmm.

Still, whatever went on in his life, when he's called upon, he can come across on screen like the happiest person in the world. When Rishi was performing, he was able to convey something very different than the way his reality is described -- taking it, of course, with a grain of "who knows what the truth is, and it isn't my business." Because I'm watching a movie; it was his job to entertain me in that movie; and no matter how silly the premise, how flimsy the story, he gave it everything he had.

Which has an interesting resonance in just how often in those movies Rishi is actually playing a performer: a musician in a band, a drummer at the temple, a singer of qawwalis or of modern pop songs. Inside of the movies, Rishi was always on stage, an entertainer literally playing an entertainer.

One thing I need to point out here: the ability to lip synch is a skill that tends to be underappreciated, because when it's done well, there's a flawless illusion that the actor is singing. In that case, it obviously isn't noticed. Rishi lip synchs with technical accuracy, but also in a way that seems really natural. Most importantly, he does it with conviction. When I think of actors using the song picturizations and playback singers to really convey emotion, thus creating emotional identification in the audience, he and Shah Rukh Khan are the two who leap to my mind. Both of them are primarily performers, entertainers, rather than actors -- which is not to say they aren't good actors. It's to say that, in my mind, they're more than actors.

So it seems appropriate that the first time I ever saw Shah Rukh was when he metamorphed into Rishi's Karz performance in the opening of Om Shanti Om. My fate as a Bollywood fan was pretty much sealed on the spot.

The story of Karz: rich man maries pretty girl. She kills him for his money. His mother stands up to Kali and demands that her son return home to her, as he promised, so he is reborn in the body of Monty: singer, guitarist, violinist, trumpet player, and incurable romantic. Which reminds me, the other day I mentioned how in Hindi films, even the trumpet can be played for good, as Rishi does here and in Hum Kisise Kum Nahin, or for evil, as Amrish Puri does in Dance Dance. Too bad they never faced off in a trumpet competition: it could have been like "The Devil Went Down to Georgia," with bulging cheeks.

At any rate, just like SRK will in Om Shanti Om, Monty begins to have flashbacks to his past life, tracks down his old family and, most importantly, the old villains who plotted his previous death. Only he takes more time to woo the pretty girls with his violin (and no, that's not a double entendre).

Many people talk about how this movie is a rip-off of the American flash-in-the-pan The Reincarnation of Peter Proud (I remember 1975, when everyone was talking about it, but it's largely forgotten today, and has never been released on DVD). Other people point out that Hindi movies like Madhumati predated that, and besides, where did the idea of reincarnation come from in the first place, hmm?

The pre-reincarnated version of Monty is pretty good-looking, which I hadn't remembered from my first viewing: so blinded was I by the sequins, apparently. He's played by Raj Kiran, who's in Star (which I own, but haven't gotten to yet). There's also a movie called Ghar Ek Mandir, in which he and Mithun play Shashi Kapoor's brothers. Calling Netflix! Somehow, when Shashi and Mithun are in the same movie, it's like worlds colliding. Matter and anti-matter? It seems so wrong, but somehow the idea draws me into its vortex.

Speaking of Mithun, I always think Karz sort of accidentally set the stage for his career. The much-maligned music is Laxmikant Pyaralel's attempt to mimic contemporary "pop." Personally, I love the music, but we've well established that I have what can be charitably called "camp taste." Once you have the "Om Shanti Om" song, with Kishore Kumar's soulful vocals layered on top of a disco "wacka wacka" rhythm, we're alreay on the road that will lead to the evergreen tunes of the Disco Dancer soundtrack. The basic template of "stage performer seeks revenge" with aggressively "trendy" songs (heavily showcasing whatever electronic effects happened to become available, or with picturizations that increasingly borrow from American pop culture) really kicks off here. These elements were already around, of course, but Karz strikes me as an archetypal film, where it all came together, for better or worse.

As for Rishi, Karz is really the swan song of his career in young love. After this, he did credible romantic performances in Yeh Vaada Raha (1982), Nagina (1986), and Chandni (1989), but by then, they'd put him in the sweaters full time, and he'd never really be able to pull off the kind of callowness he still has in Karz. Some movies, as in the first half of Deewana (1992), still attempt to put him in the role of frolicking innocent, but it doesn't come off well, and that's a movie where he no longer seems to be having any fun at all. And, well, there's the snaky Sheshnaag (1990), but in that he's more a holy fool type than a romantic lead.

Disclaimer: this is all keeping in mind that there a zillion films we're dealing with, and I've only seen a fraction of them, proportionately speaking, so I am in fact making a sweeping generalization prone to revision at any time.

One last thing: I knew I wanted some illustrations from the "Om Shanti Om" number, partly because it's such one of Rishi's famous moments, but mainly because of my personal associations. Before seeing the Karz clip in Om Shanti Om, I had no idea of all the awesomeness waiting for me out there in world. (Then, of course, "Dard-e-Disco" came along and did me in completely). At the same time, this song could be a very easy thing to make fun of, and I certainly didn't want to do that, even unintentionally. I'm not making fun of Rishi here. Not at all! I love him sincerely, in all his glittery glory.

It's sad to see the end of my self-imposed Rishi Week, although I know there'll be more in the future, what with him being my ishta devata and all. Until then, remember, "Om Shanti Ommmmmmmmm -- HA!" 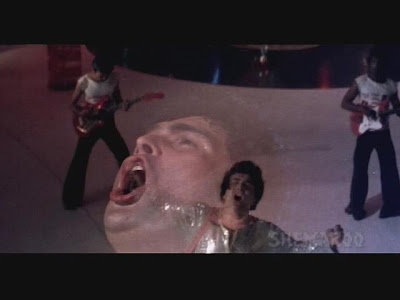 Posted by Anarchivist at 6:48 AM

70s and early 80s are a well-spring of Rishi goodness. To think that I never appreciated him all my life! I am making up for it - even getting some of his 80s stuff (and I so do not watch 80s).

You are so right about his lip syncing. While behaving as a pop-star, he doesnt forget to "sing"! His Dad was pretty musical, maybe he can sing, too?

The Karz number is mounted handsomely, but I think that Rishi didnt get the right choreography, there. He is capable of so much more than just jumping, like he does there. Just look at the songs from Khel Khel Mein, Hum Kisise Kam Nahin and this one) - so much more dancing than jumping.

Frankly, that kind of clip is why life is worth living.

Reena Roy is a vision in blue -- spangles? Spandex? Spanglex? So much goodness left for me to explore! Glad you've come around to the Great Rishi Way. :)