At Least They Don't Call Her "Girlie" Anymore 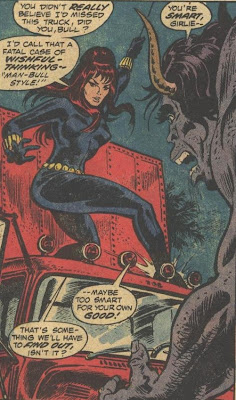 (Above is one of my top favorite comic-book panels of all time. Natasha Vs. the Man-Bull!)

So, the Internet is ablaze with people who are angry at Marvel for the shortage of female superheroes in their movies and their treatment of women characters. That means every OTHER studio in the world is giving us loads of movies about women superheroes, right?

Just looking at the past several years of films based on DC comics, who are the women characters? Not the superheroes -- just women characters in the movies at all. I'm a huge fan of Christopher Nolan's first two Batman movies, and I don't think he should have shoehorned in women characters just because, but in them, the only female character of note is Rachel Dawes. (There's Ramirez and Mrs. Gordon in Dark Knight, and the Russian ballerina, but I wouldn't call them major characters). The third movie adds Selina Kyle and Talia al Ghul. All three are involved romantically or sexually with Bruce Wayne, and none of them qualify as superheroes.

In two recent Superman movies, there's Lois Lane and Martha Kent. Zod had a female compatriat in Man of Steel, much like Sarah Douglas played back in the '80s, but I literally forgot about her. There's the Silk Spectres in Watchmen, who actually are members of a superhero team. And I guess there was a girlfriend in Green Lantern.

In the 1990s, the Batman films gave us Catwoman, Poison Ivy, and Batgirl; prior to Alicia Silverstone’s character in ‘97, you have to go back to 1984's Supergirl to find another female superhero.

On the other hand, since the X-Men films were launched in 2000, what's Marvel done for us, as far as getting women superheroes and super-powered villains on the big screen? Some are more successful than others in the execution, just like the male characters. But overall, let's see ...

There's Rogue. Jean Grey. Storm. Mystique. Emma Frost. Black Widow. Scarlet Witch. Sue Storm. We can count Elektra, if we want. Then there's all the kick-ass women agents (S.H.I.E.L.D. and CIA): Maria Hill and Peggy Carter, who are both fantastic. Moira MacTaggart. Scientist Helen Cho. Steve Rogers' neighbor, Kate, who's both tough and ethical. On the TV tie-in, there's a whole crew: May, Simmons, Skye, Bobbi, Raina, and Jiaying: some good, some bad, some with super powers, some just highly skilled agents, all major characters.

If we add in important female characters, like we did with DC, we get Pepper Potts and Jane Foster. And Darcy! Seriously, when is she going to get recruited into S.H.I.E.L.D.?

Oh, yeah, and there’s Gamora and Nebula and Nova Prime, as well.

It's true that Marvel has put out more superhero movies in the past few years than DC, and with that, we might expect more female-centric films, and more screen time for those female characters. I agree, that would be great. But again: where's the equivalent of the The Expendables with Sigourney Weaver and Linda Hamilton? Where's the equivalent of the Taken franchise with a female lead? The perception (probably based on number-crunching) that action movies are more bankable with male leads is spread all over the industry, not something that Marvel or Joss Whedon made up in a vacuum just to be jerks.

Speaking of the TV shows, I hope that everyone railing against Marvel’s treatment of women watched Agent Carter, an excellent series with a strong female lead (not to mention women producers and some women writers), supported by Marvel with high production values and extensive promotion. Despite that, the ratings were definitely underwhelming, and we’re lucky to be getting a second season.

So who are we pissed at again?

We should certainly feel free to critique women's roles in the media, but the amount of nitpicking going on seems disproportionate. Which doesn't really encourage companies to include more female characters. Maybe they'll be perceived as not worth the trouble, since nobody will ever be happy with them anyway!

I'm going to add that even if the Marvel movies did absolutely nothing else good with their female characters, throughout all their movies, I would still give Age of Ultron my highest marks as a feminist for one particular plot element. SPOILER! But seriously, you should have seen Ultron by now.

In this film, we belatedly learn something about Clint Barton (a.k.a. Hawkeye): he's really a happily married dork with two kids and another on the way. What that means, in the context of both Avengers films, is that he and Natasha's relationship is crystal-clarified as colleagues and close friends (at one point, she calls him her "best friend"). They are absolutely loyal to each other and have each other's backs. We saw this in the first film when Coulson pulled her into action with the simple words "Barton's been compromised," and in the second, each has a moment of deep concern for the other's well-being. At his house, it's obvious she's been there many times before. His kids hug her familiarly, and it's clear that she's also friends with his wife, Laura, who knows something big is up because she's never seen "Nat" look so rattled. Not only is nothing going on between Natasha and Clint -- not even a secret longing on one side or the other -- but there never has been. No romantic past gotten out of the way before they could be friends, which is a dynamic we've often seen.

Frankly, this plot development is awesome. Depictions of friendship between men and women, without some sort of relationship angst raising its head, are rare in movies. In Googling for other examples, the best similar one I found was between Veronica and Wallace in Veronica Mars.

Another note: another criticism I've been seeing, that started in an Entertainment Weekly article states that Natasha has been a significantly different character in each movie, and the headline implies that's because they have "no clue what to do with her." Yeah, she's a different thing in each movie … in the same way that Michael Weston was a different thing every week in seven seasons of Burn Notice. She’s a master spy! It's true that, just like Michael, she’s unrealistically capable: go undercover with a false identity? Fly a plane? Defuse a bomb? Kill a bad guy? Sure, why not? But they’re no more unrealistic than, say, James Bond, and he doesn’t worry anybody.

Come to think of it, if Michael lived in a universe with superhuman abilities and alien technologies, he’d be a S.H.I.E.L.D. agent. I can just imagine his and Sam's sarcasm on having to work missions with the bow and arrow guy.

But overall, Natasha's character seems plenty consistent. She's part of Nick Fury's inner circle on the Avengers Initiative, either as a liaison with super-powered people (using her psychological spy skills) or as a field agent (using her physical ones), or, more often, both. The role, as such, that she plays in the team varies depending on the needs of the mission, just like Hawkeye's does, and just like Coulson and his agents on the TV show. The only difference is that she is loosening up and "being herself" more, as she develops more relationships with people she trusts, like Steve in Winter Soldier, and Bruce in Ultron.

In Iron Man 2, she was first seen for a long stretch of the film in a persona that had been crafted for the sole purpose of appealing to Tony Stark. That's a tricky choice to introduce a character with, but the contrast paid off when the real Natasha was unveiled in a kinetic action scene that perfectly established what she was capable of, and would have been a big surprise to people unfamiliar with the comics. In The Avengers, her approach to Banner, a man with deep-seated and entirely justified paranoia about government agents, was completely different, as it should be. Instead of going undercover to infiltrate his organization, she met him in an isolated location and told him upfront what the situation was.

Natasha's particular story arc, taken from the comics, is about her breaking free from her conditioning. This didn't happen in the vague, sloppy way we're all conditioned by our societies and acclimated to their norms, but, with the directness of comic-book scenarios, she was literally conditioned, more or less brainwashed since childhood to turn her into a particular kind of person. She fulfills this role for some time, but eventually breaks free of it, and changes sides.

In doing so, she doesn't become a pacifist or anything. She continues to use the skills she learned as part of this conditioning, but for purposes that she chooses to support.

To me, this is a glaringly symbolic feminist message. Everything in your upbringing may have taught you what you were supposed to be, without taking your individuality into account. And all of that social training was to benefit others, particularly those with power, not to benefit you. Maybe we all wouldn't look so cool in tight-fitting leather, but we can all choose to shake off conditioning that isn't in line with our real values. And if anyone says we're too smart for our goods, we can (metaphorically) kick their asses.

So that's today's thoughts on the Great Natasha Controversies. There may be a follow-up post on Black Widow in the '70s. If you're good ...
Posted by Anarchivist at 6:04 PM 1 comment:

Current unexpected obsession: the CW hits Arrow and The Flash. These are shows I never thought I'd watch, much less love, but here they are, hitting exactly the right marks I want in "comic-book" entertainment. (Yikes, archery-related puns!) The fact that we have these on TV, and the Marvel movies, at the same time, kind of blows my mind.

Since these shows have been bringing in various characters from the DC universe, I've been trying to decide who I most want them to pull from the back pages as guest stars. Keep in mind I'm only midway through Arrow's season two, just in the unlikely case I've already gotten a wish and don't know yet.

My top choice would be Chloe Sullivan. She was created for Smallville, but since she has backstory with their alternate version of Oliver Queen, her presence would be awesome. Even as an Easter egg, I'd be happy. In lieu of (or in addition to!), a guest appearance by actress Allison Mack would be equally welcome, especially if she were playing a drastically different character.

Next, I've got a tie between Buddy Baker (Animal Man), and Zatanna. What's great about them is that they could work on either show. On The Flash, with all their meta-human shenanigans, they could turn up in their flashier, superhero versions. Over on Arrow, they could be stripped down to more "realistic" essences: Buddy as the family man and animal rights activist who thinks he has a special rapport with animals, and whose idealism might get him into trouble, and Zatanna as a professional stage magician (maybe performing at a Queen Consolidated function?), whose seemingly "real" mystical powers could be based in science, trickery, or hypnotism.

I also keep thinking about the Martian Manhunter, but I'm not sure either show is quite ready for him yet!
Posted by Anarchivist at 10:52 AM No comments: