The Secret Meaning of Disco

It took me almost a year from this post to come up with an answer. I had been pondering the annoying question of why so many language learning books have exercises without answers. Actually, including the answers may be what sets the Teach Yourself series apart.

Then last night I was reading the entertaining Scribblers, Sculptors, and Scribes, a supplement to the famous Wheelock's Latin I used in college a million years ago, but one that focuses on things like ancient graffiti -- which is a pretty fun idea for learning a classical language. Anyway, in the back of the book, they mention the Teacher's Editions of Wheelock's and the attendant Workbooks -- which are only for sale to teachers. The penny suddenly dislodged. The reason language books don't contain the answers is to prevent cheating.

Okay, duh. But the reason it just never occurred to me is because, dude, I can't find any classes! I can't cheat at something that doesn't exist! Especially for a language like Hindi, I have no choice but to attempt the self-taught route. Apart from the Door Into Hindi online series, my most-helpful book so far is R. S. McGregor's Outline of Hindi Grammar (with the caveat that it's usually a fluke which book is most helpful to what person), which is subtitled "With Exercises." But I can't know if I'm screwing up the exercises or not. When the book was published, though, I don't think it would have occurred to anybody that people would ever use it outside of an academic environment.

Even for a more traditional college language like Latin, I haven't been able to find a physical class that I can actually take. So the thought of trying to cheat just seems absurd.

Anyway, the best part of my Scribblers-induced Latin refresher was the sudden realization that, years ago, I learned the conjugation "Disco, Discere, Didici." Which means, of course, "to learn."

Sometimes synergy is a wonderful thing.

Actually, when I win the lottery, I plan to open a library with a design scheme based on Disco Dancer stage settings. With a voodoo/hoodoo archive and chapel in the backroom. And a wine bar. Take that, Rem Koolhaas!
Posted by Anarchivist at 6:36 AM 2 comments:

Filmi Secret Santas have begun (see ringleader Beth's blog for more info, if you're curious), and I have been blessed with an awesome taste of Disco Masala: 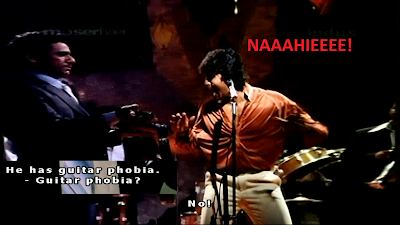 There has been a tragic lack of Disco Masala in my life lately, which I must remedy, and quickly!

Speaking of films, when, o when, will I be able to see this movie? It was clearly designed for a Target Audience of One, who is Me. (Naginas, Irfan, and the author of The Secret Diary of Laura Palmer together at last).

Or this one? For which the same comment applies. (Crazy-looking psychological horror film. About ballet!)

I know it's already too late, what with the cursed "limited releases," but I want them both to be huge hits, or at least major cult favorites, so the "Sci Fi" Channel will someday do a crossover extravaganza: Swan Vs. Nagina. The very fate of the human species will be at stake, so -- dance-off! But in the end, the ballet dancing Swan and the Kathak dancing Nagina will join forces to destroy the dull, colorless Philistines who are going to tear down the roller rink for an overpass ... wait, how did Roller Boogie get in there?
Posted by Anarchivist at 7:56 AM 3 comments: 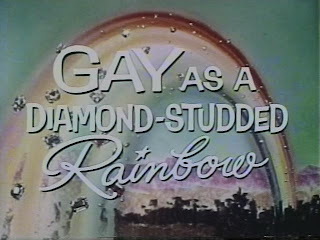 The holiday season has kicked off in the Octoberzine House, and for once, we can indulge in Christmas spirit willy-nilly, since my honey has a new job, far from the fields of retail. And what would we do, besides watch movies? What else is there?

That screenshot is from a trailer for the 1957 animated film The Snow Queen -- a Soviet production which never became a fondly remembered children's standard -- which appears in the Something Weird Retro Christmas Classics collection. I know it's a cheap shot, but it still makes me giggle.

My favorite entry in this collection of strange old short films must be Encyclopaedia Britannica's Christmas Rhapsody -- a black and white tale about The Christmas Tree That Needed Prozac. A little evergreen stands in a mountain forest, and a mournful voice narrates thoughts like "I am small and of no account" (Geez! Who knew we had to worry about the self-esteem of our Christmas trees? Thanks a bunch, Charlie Brown Christmas) and "These trees are small. The forester laughs. He's coming to laugh at me."

No, actually, he's coming to chop you down! Fortunately for the kiddies, the film doesn't graphically portray this, although the tree does fatalistically ponder, "Why have they come for me?" 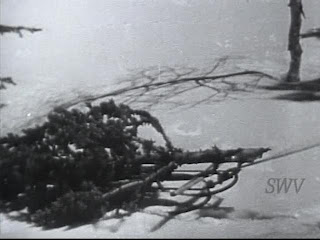 It all ends in a creepily happy ending, where the tree is taken inside "by the glow of the hearth." Dude, they're burning other TREES! You think you've got "the warmth of the fire on  my branches" -- how do you think your brethren feel?

It's probably cruel to laugh 'til you cry over a tree with Seasonal Affective Disorder, but I can't help myself. There's a RiffTrax version available for downloading, if you're into that kind of thing (downloading, I mean), but this is a case where the humor value really speaks for itself. I don't know how it could really be improved upon.

The DVD includes various other shorts to remind a person why Christmas can be the most depressing time of the year. There's one from Sid Davis in which a frankly drunken-looking Santa Claus allows the toys to become human, and then guilts them into becoming inanimate again in order to be given away as gifts. He gives them life, only to take it away! It's really disturbing considering another of the films, about a little girl who abandons her old favorite toy for the new gifts on Christmas Eve. (And in turn, she's punished with creepy stop-motion dreams).

Unfortunately -- just like freakin' Warner Brothers! -- Something Weird seems to be really going for totally no-frills DVD production. Like the other set I recently bought (Boozers and Losers),  the Christmas collection is a DVD-R. This is mainly annoying since it contains 16 shorts, with chapter stops every so many minutes. So to find a particular one, you just have to keep fast-forwarding and hope you don't overshoot. I used to mock those cases for no-frills DVDs that would advertise "Interactive Menus" as a feature. Now I realize that really WAS a feature, even a luxury!

Also, again just like the WB movies-on-demand, this trend means that it's hit and miss whether these discs are available for sale through anywhere like Amazon. To get them, or even find out they exist, you have to go directly to their websites, or (at least in Something Weird's case), pick them up on eBay. In the case of Warner Brothers, I've been waiting literally years for William Castle's Macabre to be released in any home format (it never made it to video before DVD took over), and it was only dumb luck (or the hand of fate) that I found out I could get it. Macabre is listed on Amazon now, but it wasn't before Halloween, when I bought it.

With Something Weird, at least it's such niche marketing that the kind of people looking for their collections of strange vintage material will generally know where to go. But who would guess that a weird old William Castles picture from the '50s would turn up in the WB Shop? I had no idea there was any connection. While there's an argument for buying directly from the source, but it does seem like they're making it harder for these films to find their audiences.

At any rate, I can at least assure everyone that the features on the Retro Christmas Classics disc are all G-rated. Potentially nightmare-inducing, as retro cartooning and stop-motion animation can be, but G-rated. It doesn't even have the standard promo, but only the short hypno-wheel logo-n-music, so nobody will have to explain to the kids why that scantily-clad lady is putting a snake in her mouth.

In a nice "Oh, and By the Way" segue to our Feature Presentation: the Retro Xmas disc opens with a trailer for the infamous Mexican Santa Claus, from 1959, which claims that "a dazzling panorama unfolds before your startled eyes." Startled eyes is right. Here's how the creepy Claus keeps tabs on the little girls and boys: 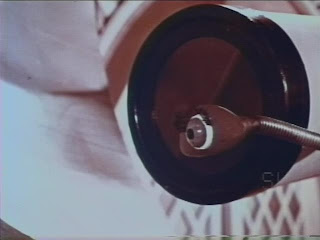 Proving our seasonal masochism, we then watched Santa Claus in its entirety -- fortunately, the Mystery Science Theater 3000 version (speaking of the RiffTrax fellas). 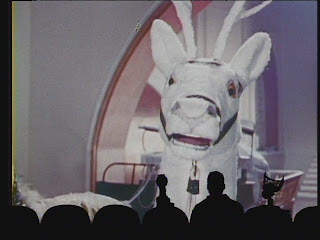 This picture doesn't even begin to convey how truly creepy these wind-up reindeer really are.

The plot of Santa Claus is painfully simple: Santa, as an avatar of goodness, is apparently a long-time enemy of Satan, the avatar of evil. The film does not use the term "avatar."  So Satan sends up a shiny red devil named Pitch to thwart Santa's plans, which he does by inspiring a few Mexican street urchins to throw rocks at a department store version, and then plot feebly to kidnap the real thing when he comes to deliver their presents. It's no spoiler to say Santa isn't in any danger.

There's also a little girl who opines that Santa doesn't bring gifts to the poor -- and well, not only does the film actually address the injustices of the class divide, but when the devil is tempting her to steal a doll, he makes some valid socioeconomic points. Because it's a cheesy kid's movie, though, magic makes everything right in the end. Sweet little Lupita and her Mom pray that Santa will come, so he delivers an enormous doll to their doorstep. One wonders how long it'll be before the folks pawn it to buy food.

But never mind that! Most of the film's running time is spent on bizarre hijinks in Santa's Cloud City, and showing him laboriously getting out of the sleigh and going down ladders on rooftops.

Either or both are definitely recommended for hipsters and other assorted oddballs who've seen the MST3K version of Santa Claus Conquers the Martians as many times as some people watch It's a Wonderful Life, and are looking for something equally whacked out to make the season complete. And remember, eggnog can only improve them!
Posted by Anarchivist at 10:50 AM 3 comments: