A Girl Walks Home Among Us

Getting in the spirit of the season, our movie watching has begun to take on a theme: those things in some way macabre. What are the odds? Here's a few selections that have kicked off autumn at the Octoberzine house.

This Farsi-language film, shot in California with Iranian-American actors, is very much an art film, and parts of it reminded me of interviews with the director of A Ghost Story, where he talked about deliberately trying the audience's patience with very slow scenes. It's beautiful to look at, full of stunning imagery (like the vampire, luminous Sheila Vand, on a skateboard), and it has a great soundtrack. I also enjoyed its idea of the unnamed vampire as both an immortal avenging angel and a perpetual teenage girl: I wondered if that Bee Gees poster had been on her wall since their heyday, and her checking to see if a victim had any CDs worth taking was a nice touch. Also, that's Dominic Rains -- the sadistic Kree administrator Kassius from Marvel's Agents of S.H.I.E.L.D. -- as the drug dealer! The weak link was the romantic subplot, although it made sense, given the character's obvious longing for human connection. Worth watching, but you better be in the mood for a tone poem. 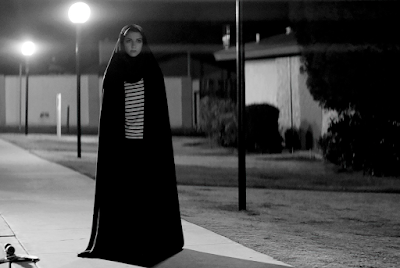 This was also fairly slow-paced, especially in the first half. An expedition goes to find the Creature from the Black Lagoon and perform research that will help mankind evolve to live in outer space. Yup! He gets burned, mummified in surgical bandages, and then forced to breathe through his rudimentary lung system, all of which turns him more Man than Gill Man. He also seems to have bulked up considerably since the first movie, and when he's put in hospital pajamas, he bears a strange resemblance to Tor Johnson. Meanwhile, the head scientist's lovely wife is trapped in a #MeToo nightmare: surrounded by condescension, would-be rapists, and worst of all, a controlling and probably abusive husband. Her introduction made me think she was going to be an unsympathetic character, written in to generate conflict among the crew, but the movie shines a light on her limited options, equating her situation with that of the imprisoned Creature, although it didn't go in the Shape of Water-lite direction it might have. It's unlikely to supplant the original in anyone's affections, but it does prove that WTF?? sequels aren't a new invention.

Posted by Anarchivist at 7:13 AM No comments:

It's always weird for me to talk about so-called real life, but I do have some updates I've forgotten about. Been too busy ranting about Marvel movies -- believe me, I spared you some deep thoughts on arguments that I decided to walk away from -- plus reading a bunch of Star Wars novels for the first time, and listening to podcasts again, thanks to some adjustments at my day job that enable me to do that. Yay, day job!

So what's new with me?

This is available for purchase at all the usual online sources, from McFarland Press:  Giant Creatures in Our World: Essays on Kaiju and American Popular Culture. I'm sure you'll enjoy it, especially “We are eating Gamera”: Mystery Science Theater 3000 Consumes the Kaiju." I did one panel at a local sci-fi convention as a kaiju expert, so that's something that would be on the bucket list, if I knew it was a thing that might happen. If you want more thoughts on either Gamera or MST3K, I've got 'em, so just let me know.

A poem sequence called "Masque: Chicago" appeared in the 2017 issue of Moveable Type, on the theme of "Metropolis." I wrote them some years ago, and always hoped they'd find someone to appreciate them, so that was nice!

In June, I went to Cross Plains, Texas, for Howard Days, and was thrilled to tie for the Cimmerian Award for Best Online Essay with the esteemed Bobby Derie in the Robert E. Howard Foundation Awards. The essay, "Queen by Fire and Steel and Slaughter: Bêlit’s Hymn," appeared as a guest post on the blog On an Underwood No. 5. Since Howard Days, two more of my essays have been published there: "By the Phoenix on This Sword I Rule!" (about the revisions that turned Kull into Conan) and "Swanson of Dakota," which contains as much information as I could find about Carl Swanson, a North Dakota bookseller who corresponded with Howard, Lovecraft, and others in an attempt to set up his own fantasy magazine.

Upcoming are an essay on hoodoo in the work of Ishmael Reed for a McFarland anthology (title TBA), and a local presentation on Arthur Machen and the legend of the Angel of Mons.

So that't that. Whew! Next up I will talk about people OTHER than me, swear to Rishi.
Posted by Anarchivist at 9:07 AM No comments: