(NOTE: Not only did I hesitate about seeing Halloween Kills, but I hesitated in finishing the blog post! Mostly completed in November 2021, except for the ending. We'll see if I have a better reaction to Halloween Ends).

All through the Halloween season I hesitated about seeing Halloween Kills, mostly because the reviews, and people I follow on Twitter who know their stuff, were pretty dubious about it. But now that we're into November, with weekend plans that fell through and still one matinee showing, I was suddenly in the mood.

I'm admitting my bias upfront: Halloween: 20 Years Later (aka H20) is far and away the superior version of this basic story: Laurie confronts her trauma and faces Michael once and for all. It had great Halloween ambience, and Laurie's decisions -- moving across the country, changing her name -- were sound responses to the belief that an unstoppable killer was obsessed with her. And it frankly screwed the needs of the franchise by having the most satisfying possible ending to the saga. I'll reserve judgment until Halloween Ends (ha! I'll believe that when I see it!) comes out, but it's pretty hard to believe that it can contain anything to top the moment she grabs that ax and screams "Michael!" I mean, even if she conclusively defeats him ... she already has!

Of course it's always great to see Jamie Lee Curtis, and Judy Greer was a welcome addition to the franchise, so for better or worse, we got more of her. Who knew I wanted to see Judy Greer wielding a gun and kicking ass? But so far, these new movies have shown Laurie Strode, the most beloved heroine in horror history, utterly wasting her life and getting everyone around her killed for no real reason.

I'm trying to be less nit-picky about things: movies are movies and they do things in order to tell a visual story in a compressed time frame. I've seen one too many killjoy YouTube videos, and I don't want to be like those people. But sometimes it's just too egregious! So, seriously people: hospitals don't put dead bodies in rooms right next to where they admit patients. They have morgues for this purpose, which are out of sight.

Bonus complaints about this: the bodies lying around in that room, visible to passers-by, were from the first wave of killings, so there's no way the staff was overwhelmed at the time. And even if they were: those characters were definitively, unambiguously dead long before they were brought there. It's not like they brought them to the ER, they died, and then they needed to be moved. So they'd have been brought directly to the morgue, which would have a separate entrance. More specific complaint: even if you were putting dead bodies in a visible room on a busy corridor, the room in question has BLINDS, which could easily be closed, but are not. Notification of family, schmotification of family! Medical facilities have protocols for every step of this situation (up until the time a torch-and-pitchfork mob breaks out), so when all this is over, somebody in Haddonfield is almost certainly getting sued.

I knew there was going to be some mob-mentality stuff, and I wasn't as appalled as I thought I'd be. It was funny, though, that the Haddonfield residents decide they've had enough, in the one continuity where nothing has happened there for 40 years. It seems motivated by the residual knowledge that in other timelines, he's killed a lot more people and wrecked more havoc, even though it didn't happen in theirs. In this timeline, Michael killed his sister in 1963, and then killed four people in 1978. It's a running gag that younger people only vaguely remember any of this, and the trick-or-treating kids haven't heard of it even as an urban legend. Tommy specifically got some people in a bar riled up with his story, but the idea that Michael has been "terrorizing the town" for 40 years is beyond absurd.

Yes, they're probably going for something with this, with the whole "mirror image" thing, but come on, we've seen a normal town turning into a mob in ParaNorman, and that seems a lot more organic and way better motivated.

The film is also puzzlingly interested in Lonnie, the kid who picked on Tommy Doyle in the original Halloween and got scared away from the Myers house by Dr. Loomis. I'm not sure why, although I'm relieved that the sequel dropped the confusing stuff about how the grown-up Lonnie and his family are in a cult (present in the 2018 film's novelization, where it seemed plunked in for no apparent reason and was never explained, just mentioned enough to confuse us). Showing him in flashback, bullied by weird kids who make a point of saying their family name, the Mullaneys, was an odd choice. (No, that doesn't come from any of the previous movies, so you didn't miss anything). Maybe it's a thing about how the bully can get bullied by others, when he's apart from the gang? But he seems very vulnerable, more Tommy-like, not like a kid who had been swaggering around town with his friends all night, bullying other kids, until just before this encounter.

This random plot thread, though, makes me wonder if there's a connection to the obnoxious modern-day trick-or-treaters. In the past and in the present day, there's a group of three kids who are being jerks to everyone. Maybe this is just a "the more things change" piece of background business, but I'm kind of worried they're going to make something out of it.

It's also hard to watch "slow-walking Michael stalks running victim" scenes with a straight face in a post-Leslie Vernon world. If you don't know what I'm talking about, go watch Behind the Mask: The Rise of Leslie Vernon ASAP.

Overall, some of the choices in this movie retroactively made me more critical of the 2018 Halloween reboot, which I had liked well enough on first watching, but that seemed to fall apart the more I thought about it. Now we're on the eve of Halloween Ends (again: HA!), and I'm still wanting to like it. I've come to appreciate Halloweens 4 and 5, for Pete's sake, so it's not impossible that this series can redeem itself. Or at least give me a few scenes, a few images, to add to the lore. It's possible, right? 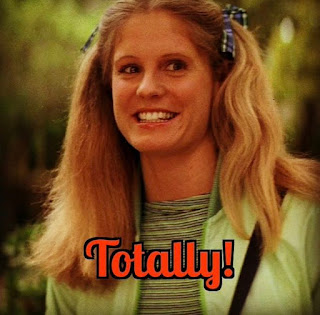 Posted by Anarchivist at 12:42 PM No comments: