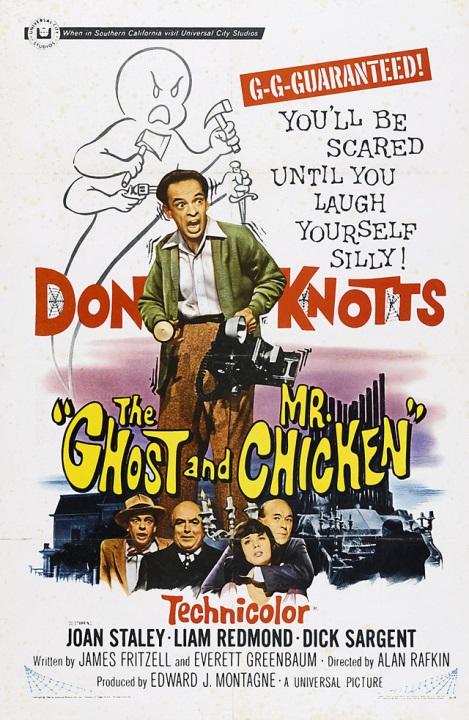 It’s easy to view the art of earlier times, especially ones that evoke a specific, apparently more wholesome period like the 1950s and ‘60s, through a lens of nostalgia. At the time of their creation, though, these were not a product of reminiscence, but of up-to-the-moment mythologizing. Their depiction of American life was based on how people at the time saw themselves, or at least the way they wanted to be seen – or, to further complicate things, the picture that the mass media thought Americans wanted to see reflected back at themselves.

If the 1950s created the image of a new, prosperous national identity, promoted by the media and public rhetoric, this vision had firmly taken hold by the mid-60s, and everyone knew what a typical American town with typical American values was supposed to look like. At least they did if they watched television -- and were white, and of the socioeconomic statuses represented on the programs of the day. By the time director Alan Rafkin’s The Ghost and Mr. Chicken came along in 1966, the film’s depiction of quaint small-town life itself has a quality of nostalgia, and a self-awareness that separates it from earlier films.

Its setting always reminds me of The Music Man, which debuted on Broadway in 1957 and became a film in 1962. That similar world of porch swings and clustered, gossiping townspeople, dressed in their Sunday best, is set in 1912: a sanitized image of the past, not a supposed present.

Rafkin’s film evokes that older American idea with its sometimes “old-timey” feel. His fictional Rachel, Kansas, a clean and clean-cut corner of the heartland, has no veneer of the realism found in the pioneering works of 1950s small-town horror like The 1957's The Vampire, or William Castle's 1958 Macabre. Instead, it looks more like the towns seen in TV sitcoms and Disney live-action films, with contemporary elements wedged into what often seems like a period piece. The men wear suits and ties every day, the women are always dressed up (and with a fabulous array of crazy flowered hats), and rooms are full of old-fashioned décor, as if frozen in time. 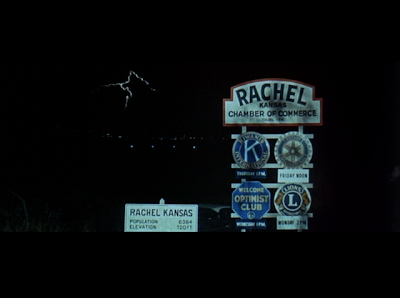 The film opens with Don Knotts driving into Rachel, which exhibits the literal signs of prosperous normalcy: advertising the Chamber of Commerce, the Kiwanis, Rotary, Lions, and even the Optimists Club. Then, almost immediately, the film presents a full-on Gothic haunted mansion in this cozy town, with hidden passages and a dramatic pipe organ, which everyone calls a “murder house,” just like in American Horror Story. Knotts’ Luther, an imaginative typesetter and aspiring reporter, is convinced by a nosy elderly woman that she’s seen a murder there while “getting ready to brush my teeth and watch Lawrence Welk.” In actuality, the local drunk was hit in the head by his angry wife, but the neighbor’s dull existence and lack of worldly experience have led her to imagine things. The incident turns the eager Luther into a laughing stock, but a chain of events causes him to spend the night in the haunted house as a publicity stunt. 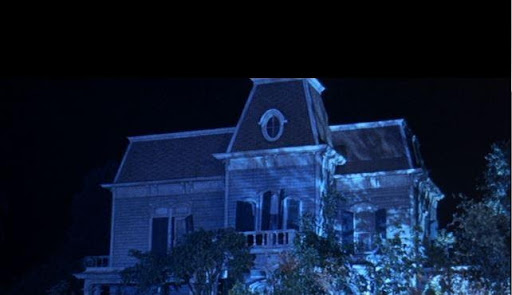 The inheritor of the property and his banker discuss the merits of simply tearing down the house versus selling its parts piecemeal, in a pretty bald depiction of subordinating history to the profit motive, common enough in the American Midwest. The desire to bulldoze over the past in the guise of progress, however, is openly presented as a way to cover up old crimes, a subtly subversive spin.

Many of the horror films of the time, while reflecting some degree of a wholesome all-American environment, show the dark cracks that existed from the beginning, and The Ghost and Mr. Chicken is no exception. It is a lighthearted, G-rated, family-friendly film, about an idealized time and place that never really were, but that people still believe in. At the same time, it centers around a couple who were brutally murdered by a family member, out of sheer greed. Their wealth and position couldn’t shield them from the threat of evil within their own family unit, within their own home. Only the diligence of their working-class immigrant gardener brings the killer, another imminently respectable pillar of the community, to justice, and he was afraid to say what he had witnessed without proof, assuming that the more privileged man would be believed. So even here, there’s a vein of underlying darkness.

All of this is embedded, though, in a resolutely wholesome and cheerful environment, appropriate as a vehicle for actors familiar from the archetypal TV sitcoms Rafkin had worked on. Screenwriters James Fritzell and Everett Greenbaum had written for multiple shows, including the one that made Knotts famous, The Andy Griffith Show. In his memoir, Barney Fife and Other Characters I Have Known, Knotts describes the origin of the film in that program’s “Haunted House” episode, and his and Griffith’s involvement in its development and pre-production.

Much of the supporting cast was plucked from Mayberry as well, with the first three people onscreen all well-known regulars: Knotts, Hope Summers (who played Aunt Bea’s friend Clara), and Hal Smith, playing basically the same character, with a different name. Supporting actors Reta Shaw, Bert Mustin, and Lurene Tuttle (also in Psycho!), had also appeared on Andy Griffith. Dick Sargent, famous from Bewitched, is also present as Luther’s boss.

These connections with Mayberry and other family-oriented comedies add to the sense that it the film is taking place in a slightly romanticized simpler time, probably even in the context of 1966, a time of growing cultural change. One intriguing scene is set in the small-town diner, staged to highlight a prominent, fully integrated lunch counter. Given the importance of lunch counters to the struggle for Civil Rights, with the term often standing in as shorthand for segregated spaces, it’s hard to believe this is a coincidence. Especially when one considers that the landmark case of Brown vs. the Board of Education took place in Kansas, the heartland of America, the state where this movie is set. Other black background characters appear at the Chamber of Commerce picnic, too, and a black woman congratulates Luther near the end, so Rachel’s all-American nature is specifically depicted to include non-white residents.

In another subtle progressive nod, the attractive young Alma, who’ll become Luther’s unlikely love interest, is depicted as a fairly modern woman. She’s introduced picking up her boyfriend in her own car, and when she inevitably dumps him, reminds him that “you don’t own me … You never did.” Refreshingly for a G-rated film of its time, where one might expect a Ronnie Howard equivalent or a pesky kid brother for Alma, there are no children in the cast, except for a few in the crowd scenes. Its concerns are those of adults: career aspirations, the desire for respect, and insecurity about romance. These common, everyday concerns play out in a picturesque, optimistic world, where none of these suggested social changes are rocking any boats. Throughout, thought, right down the street, is a representative of the whole Gothic tradition, hiding horrors of the past that are still coming to light.

Just two years later, George Romero’s Night of the Living Dead would be released, changing horror films forever. Many later movies in the genre would take place in small towns, but they largely lack the sense of their settings as representing American life or ideals. Even in the less generic towns in films like John Carpenter’s Halloween and The Fog, we often find that the subtext has become text, with storylines that more openly expose the conflicts and hypocrisies found there. They reflect other social changes, as well. The nosy neighbors, the family doctors, the people met on the streets have all disappeared, swept away by isolating modernity.

In this mid-century micro-genre of all-American small-town horrors, with their mundane settings and lack of supernatural ambiance, do these films exhibit a failure of the imagination? Or in rejecting many of the expected traditional trappings of horror, bringing its themes to new, modern settings, was it an expansion of the imagination? Perhaps both, as they fuse old and new, dark and light, in a peculiarly American way.

Posted by Anarchivist at 9:16 AM No comments: