Dhund That To Me One More Time

Like so many bad horror films I've watched over the years, 2003's Dhund: The Fog (original review here) has improved with time. Not that it's necessarily any better, as such, but it was a lot better on the second viewing.

Some of this may be because, when I first saw Dhund in 2007, I had a limited frame of reference for Hindi films. My first encounter had been via the comic stylings of Salman Khan and Govinda, so I probably should have been more charitable to its stretches of so-called comedy. The best word for the early section of lighthearted romance is still "interminable," but now I'm more accustomed to the Bollywood rhythm of slow-paced, non-narrative shenanigans that suddenly take a drastic turn in tone and/or genre.

Certainly the film's logical problems are still noticeable. Like why a heroine who was willing to get some guys arrested for putting her picture in a fashion magazine wouldn't even TELL anyone that a creepy dude has literally threatened her life, broken into her family home, and killed her dog. It seems like she'd be right on top of that. And, unfortunately, the so-called motive for the murder spree is more nonsensical the more you think about it. But the charms I noticed the first time around, like the dramatic musical chord when the villain tosses his hair,and the crazy tub o' blood, are now ones I'm almost as fond of as that redeeming scene in Ruby when the guy gets a cup full of blood out of a pop machine.

Speaking of redeeming, there's really only one word to explain why we watched this again: IRRFAN!

Yes, this is the movie that introduced me to Irrfan Khan. 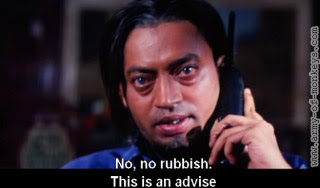 After this, I next tracked down a movie called The Killer, reviewed here. Yes, it's basically a rip-off of Collateral, but if you can get past the lack of subtitles, you can check out a scene on YouTube that shows off how much better a premise is with Irrfan in a role. It wasn't long before he became my favorite actor: not in Bollywood films, but period.

Now, Irrfan was NOT attractive in Dhund (although if you've seen Maqbool, wowza!), and his part is a pretty one-dimensional villain, but he immediately caught my eye. As he became more famous, appearing in a slew of high-profile American films and working with the likes of Wes Anderson, Danny Boyle, and Ron Howard, my best Bollywood friend has often asked me, "How did you KNOW?"

All I can say is that my years of B-movie watching have helped me develop a spider-sense -- speaking of high-profile American films in which Irrfan was wasted: he was totally set up for more in The Amazing Spider-Man, but then was barely on screen. In Dhund, however silly the story gets, he's super-intense, full of charismatic conviction. And although they ugly him up as much as possible, there's still a handsome framework peeking out underneath.

This is from Jurassic World, in which he also didn't get nearly enough screen time, but totally ruled the movie when he did.

NOTE: I've had a draft of this post revisiting Dhund: The Fog sitting around, and this morning, I woke to the news about Irrfan's death on April 29, 2020. I don't have a summary of anything, but that seems appropriate for this moment in time. Love to all. #irrfanforever
Posted by Anarchivist at 7:51 AM No comments:

Now that I'm working from home and have extra time due to the lack of commute, but also am not getting out of the house and getting my regular (not much) amount of exercise, I decided to bust out my collection of bellydance DVDs.

I am no expert, believe me, although I'm not an absolute beginner either. I'm not sure how any of these DVDs would work if you're brand-new, since at least I don't need to have shimmies or hip drops explained to me anymore, and I'm familiar with other of the terminology (like "releve" when you go up on your toes), but I'm listing what I've done so far.

After almost two weeks, I've found I'm already more confident about picking and choosing, and mixing up DVDs, although I haven't gone through all of them yet.

One of the most important things is listening to my body, knowing when to quit, and when something is too advanced or strenuous for me. If I need to cut it short, I do, and then do some stretching. I'm trying to alternate areas of the body that I'm working on, although it's sort of haphazard. In general, a more strenuous day leads to a more gentle day. Also, I obviously skipped some days, although I've been consistently doing light stretches.

Day 1. From The Belly Dance Shimmy Workout, with Sarah Skinner: Chapters 1-3. That got a little strenuous, but felt good! I'll get back to that.

Day 2. I could tell from the day before that my arms need some work, so I did some light weight lifting with my smallest weights. I have a routine I got from an old Jane Fonda workout video back in the day, which is pretty basic. She said to do weights only every other day, so that's what I've always believed! Then I did the Circles and Loops sections from Luscious: The Bellydance Workout for Beginners (with Neon).

Day 6.  Arm weights and a longer period of stretches, based on things I remember from classes.

Day 7. From Sacred Bellydance (Temple of Jehan): Stretching and Breathing from Disc 1, plus Hips, into some Walks, from Disc 2.

Day 8. Arm weights, then the Tune-Up section of Temple Goddess Workout with Revital Carrol. I did some of the Cool Down as well, but it was a little too much yoga for me.

Day 11. I did Hips and Chest through Chapter 9 in Shaabi Dance - Technique & Combinations for Belly Dance (with Shahrzad). Then I went on a long walk, and between the two things, I definitely overdid it! I strained a muscle in my shin, of all places.

Day 12. Put off the arm weights until tomorrow! Went back to Sacred Bellydance for the Warmup, Stretching and Breathing again, and Foot Stretches. Also did some Arm segments from Rachel Brice's Bellydance Arms & Posture.

I will try to keep notating my routine, and maybe I'll come up with some helpful suggestions in the end, for my fellow dabblers!


Posted by Anarchivist at 8:51 AM No comments: