The Most Wonderful Time

Wishing everyone a wonderful Hallow's Eve, Hallowe'en, Samhain, or whatever name you call the blessed 31st of October! It's been a busy season, full of horror movie-watching, pumpkin-carving, and walking around at night inspecting the tombstones in people's front yards.

II'm particularly excited about the post-Halloween season since I'm the "next week on" guest on classic horror movie expert Derek M. Koch's Monster Kid Radio. (I'll update with details). Not only did we discuss Robert E. Howard and the fine 1965 film The Beach Girls and the Monster, but we talked about my Halloween stocker-stuffer novella, The Jack-o-Lantern Box. You can see that over on the right. It's something I wrote for love, wanting to preserve the feeling of an old-timey 1970s Halloween, so it was gratifying to hear that someone whose work I have so much respect for was able to relate to it and appreciate it as much as he did.

Next up, I'm starting to look for a home for a full-length novel (equally non-commercial, huzzah!), and have various projects, fiction and nonfiction, in various states of disarray. There may be a 19th-century Christmas coming up next, but I'll let you know once there's something to tell. 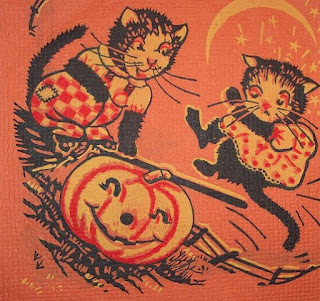 In the meantime, enjoy everything the thinning of the veil has to offer.

Posted by Anarchivist at 12:49 PM No comments:

The Lair of the Cove

Expanding a 1,171 word Internet story into a 6-hour TV miniseries was bound to present some challenges. So it’s probably no surprise that Channel Zero: Candle Cove, the 2016 SyFy Channel adaptation of the 2009 creepypasta, struggles a bit to pad out the plot. 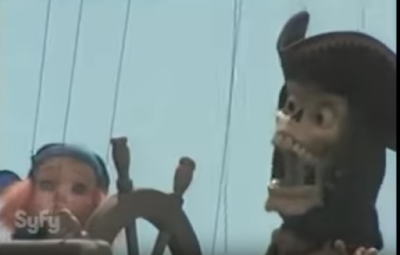 A renowned child psychologist visits his sleepy hometown, which had suffered a series of child murders, including the disappearance of his twin brother. He believes the crimes were connected to a barely-remembered TV puppet show, but when new strange incidents occur, his former schoolmates suspect he’s the one responsible.

Although the leads didn’t make a huge impression, it’s good to see Fiona Shaw get some substantial screentime; even if much of that is made up of looking pensive, she’s certainly able to make the most of that. Luisa D’Oliveira is also good as a level-headed deputy thrust into authority by the mysterious goings-on.

The series aims for something between Stephen King’s It and American Horror Story, but more slow-paced and low-key. I was underwhelmed by the tooth monster, and the show in general might be more unsettling to a parent with small children, or who is particularly creeped out by puppets. But frankly, that wasn’t all bad. I mean, we’ve had Hereditary sitting on the DVD player for about three weeks, but real life is so harsh we haven’t watched it yet. If you’re looking for something with a creepy ambience that you haven’t already watched a bunch of times, well, this was perfectly acceptable.

The "Candle Cove" puppet show-within-a-show is the best part –especially after my honey likened it to the Binkley and Doinkel series of Canadian PSAs he saw as a kid. There's a whole series watchable on YouTube, and the hand-melting stuff is CRAZY. 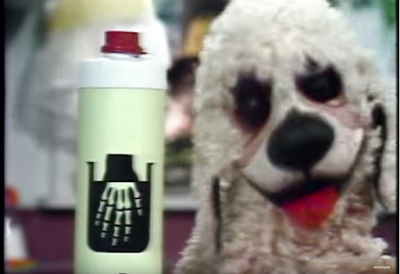 When I first saw Ken Russell’s The Lair of the White Worm (1988), I totally loved it. About a decade later, I thought: I dunno, this is maybe too over the top. Clearly I was crazy, because it is exactly the right amount of over the top. The Bram Stoker novel it’s based on doesn’t make a whole lot of sense: for example, it contains a number of social calls that turn into intense hypnotic stare-downs for no apparent reason. In retrospect, Russell’s changes shaped it into a fairly satisfying narrative, and their visual flair and (often) outrageousness is a happy bonus.

A pair of plucky village lasses (Sammi Davis and Catherine Oxenberg) are putting on brave faces after their parents’ mysterious disappearance. When an archeological student digs up a large snake skull in their backyard, secrets are uncovered that go back to the time of the Roman occupation, which may explain why their sexy neighbor is so obsessed with Snakes and Ladders. 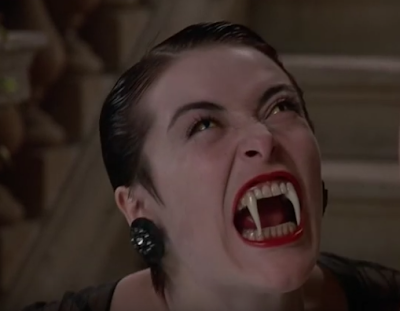 Today, of course, this is a two-Doctor film, since Peter Capaldi starred in the new Doctor Who’s 8th – 10th seasons, and Hugh Grant appeared as a short-lived Doctor in Steven Moffat’s comedic Curse of Fatal Death. Come to think of it, if the show had gone the Missy route in the ‘80s, co-star Amanda Donohoe would have been great in the role! The young Capaldi is memorable with his kilt, curly perm, and wrangling of snake people with the bagpipes. As the young lord of the manor who doesn’t think giant snakes and the related carnage should get in the way of drinks at the pub with “the girls,” it’s probably Grant’s most likeable performance (his least likeable being the Mircea Eliade character in The Bengali Night. Ew). His dream sequence with the phallic felt-tip pen is an all-time camp classic.
And while everyone mainly, and justly, remembers the D’Ampton Worm song, the snake charmer music is also pretty amazing, and I enjoyed that it was accompanied by the vaguely lascivious butler’s reminiscences about belly dancers.

Catherine Oxenberg has been in the news lately for unfortunate reasons, discussing her daughter’s involvement with the Nxivm cult. It feels exploitative to follow that up with a note that the film contains nudity and some violence – but we should all know the difference between movies and life. If you don’t mind a little R-rated kink and crazy, and feel like something vampire-esque, this is well worth a gloomy evening. 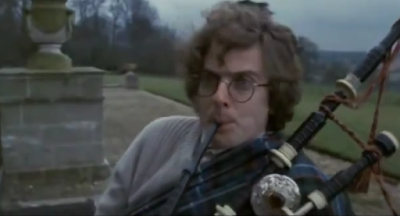 Posted by Anarchivist at 12:37 PM No comments: