Sisterhood of the Black Crow

While on my recent cemetery adventures, my cohorts and I noticed that the ground seemed oddly sunken in some areas. Possibly related to the loss of all those trees, from areas where they were torn out? That's a theory. Whatever caused it, there were patches of earth, some very near graves, that looked like the ground wanted to cave in. My sister spotted one of them, went around to the other side of a tombstone to investigate, and got a startle.

This is what she found: 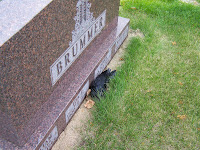 Our first thought was that the bird was fake: after all, it was close to Halloween, and that's when you can actually buy artificial crows in retail establishments. However, getting as close as we could without actually poking it, three things became clear. It was a real bird. It was freshly dead. And it was extremely oddly placed. 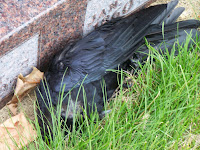 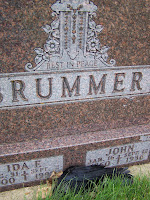 Could this have been some kind of "natural causes"? It seems unlikely. It seems more likely that someone put the bird under the "Rest in Peace." But who? Why?

We decided that someday we should start a group called the Coven of the Black Crow. Then we realized that "Sisterhood of the Black Crow" would be more apt, so I'm staking my claim on the internet, just in case. Since I've supposedly been included in the "Brotherhood of Man" all my life, I'm sure it wouldn't be a problem for us to eventually welcome in men to the Sisterhood.

I suppose that saying "Black Crow" is kinda redundant. However, "Sisterhood of the Crow" just sounds a little too plain and unvarnished to get the idea across.

And in all honesty, "Sisterhood of the DEAD Crow" is actually more accurate. But I don't know what people would make of that!

The preliminary mandate of the Sisterhood is that we go places, we keep our eyes open, and we see things. That's all you need to do to have some unlikely experiences.
Posted by Anarchivist at 6:39 PM No comments: