Rishi Kapoor: Before the Sweaters

Possibly part of a series. But no promises!

The unbearably romantic tragedy-fest of Laila Majnu (1976) begins with a story-song about two warring clans (led by Iftekhar and Kamal Kapoor, so it's already awesome). Their children fall in innocent love, but are separated by the hatred of their families. The scene abruptly shifts to a camel auction at an open-air market, interrupted by a sudden, violent dust storm.

"What does nature want?" someone wails in the crowd. Nature wants one thing -- to bring this man: 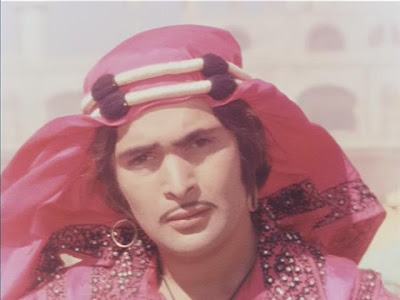 Together with this woman: 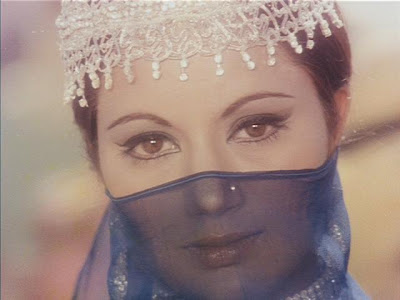 The wind blows her scarf right onto his head, he follows her around in the streets, and that very night, he sneaks into her bedroom to tie an anklet on her while she sleeps. Excuse me while I stop to gape at the spectacle of Chintuji's astonishing handsomeness. 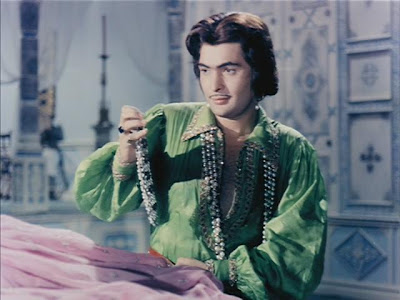 Obviously, hot as this all is, it can't end happily. But along the way we get cleverly staged stunts, gorgeous gowns (even on the servant girls), and comic sidekicks who are actually funny (including Rishi's delightful Rafoo Chakkar cohort, Paintal). Danny Denzongpa gets to show his stuff in a role that's noble rather than sinister. As for Rishi -- given the release dates, he could well have been filming this concurrently with the modern teenage Romeo of Kabhi Kabhie, or his classic comedy role in Amar Akbar Anthony. Mind boggling. Here he gives the performance of a lifetime, sensitive and nuanced even when he's rolling around in the sand, a tattered madman. He may have won some of us over while spinning on a giant record, in a ridiculous sequined jumpsuit, but neither he, nor we, have anything to be embarrassed about.
Posted by Anarchivist at 1:21 PM