Super Tailor: the name says it all

Along with Don, I'd say this movie is one of the better introductions to Masalaland (Masa La-La Land?) -- not too violent, not too ridiculous. In fact, I'd say it's just ridiculous enough. But I'm not here to sing the praises of blind mothers, long-lost brothers, and Johnny Walker Black, even though they're all super-awesome. I'm here to talk about what's really important in life -- sheer shirts and other fashion statements!

My original idea for Rishi Kapoor paper dolls involved the colorful sweaters of Chandni, which would be delightful to reproduce in paper form, but the outfits of AAA would make an even better start. The plot may hinge on his character, Akbar, being raised by a Muslim, but I think it's far more significant that he's raised by a tailor. Because look how stylish he is! 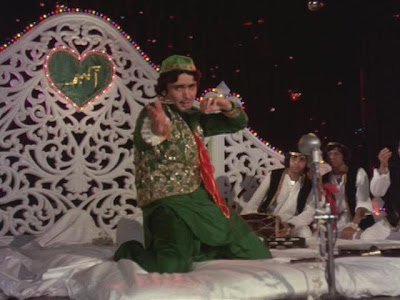 Lurking, in a fabulous floral print: 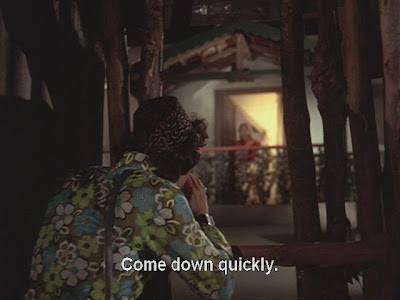 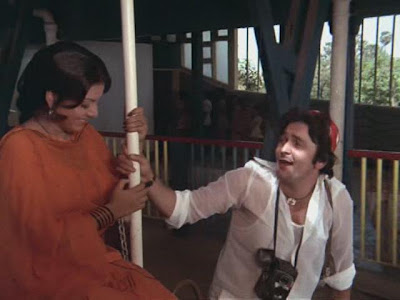 And its counterpart, in red. Maybe from the same department store? 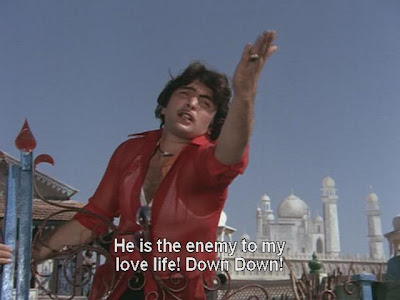 The devotional look is subtle, but still, I love the rose-patterned cap: 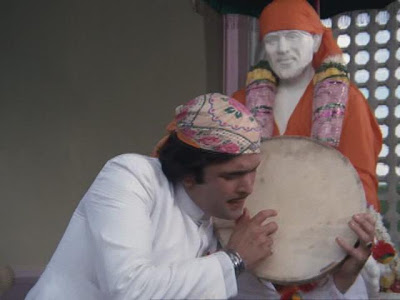 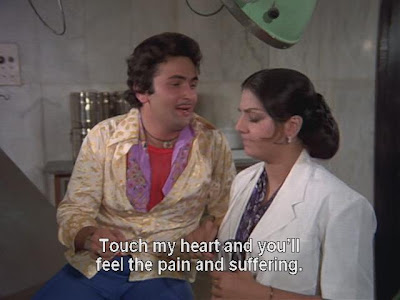 Let's get a better look at that fabric: 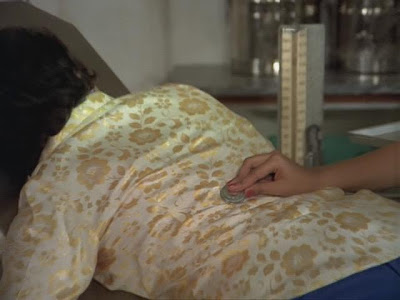 Yum City! I would so wear this shirt.

Since I don't know who specifically was responsible for Akbar's particular look, and who was dressing the heroines, all hail to the wardrobe staff of Amar Akbar Anthony: Mani Rabadi, Leena Daru, Kachin, and Super Tailor.

In the '70s alone, top-billed Mani Rabadi worked on films like Bobby, Jangal Mein Mangal, Geeta Mera Naam, Rafoo Chakkar (squee!), the 1976 Nagin, Dharam Veer, and Don. Earlier she did "Dress Design" for the Shammi/Sharmila An Evening in Paris, and in the '80s even went on to my beloved 3-D Saamri, aka Purana Mandir 2. That's a really special "All hail!"

Leena Daru also worked on Dharam Veer, along with other movies like Seeta Aur Geeta, and later was the Costume Designer for Chandni and Deewana. I wonder how much she's to blame for picking out Rishi's sweaters?

Kachin, like Super Tailor, appears to be a company, with a huge list of credits from Sholay all the way to -- Khoon Bhari Maang. Mwa ha ha! We'll never stop running out of examples for "from the Sublime to the Ridiculous." Super Tailor did costumes for the clothing-centric Hum Kisise Kum Nahin, the largely clothing-optional Satyam Shivam Sundaram, and even -- my beloved Disco Dancer! It just gets better and better.

There's also a credit for "Dress" to the Late Narayan Rao. I don't know what distinguishes "Dress" from "Wardrobe," but it's appreciated anyway, especially since his short list of credits includes International Crook. He definitely deserves marigolds around his picture.
Posted by Anarchivist at 6:30 AM

You missed the green sheer shirt!

Do you remember when he wore it? I had a sneaking suspicion I was missing something...

When I look at the shirt in the last screencap, one phrase comes to mind - well upholstered, not because Rishi is well upholstered here, but because this was a popular type of upholstery/curtain print a few decades on!

It would indeed make an awesome print for a sofa or curtains. Or wallpaper! Where wouldn't it look good? It looks sort of three-dimensional, too, like the gold pattern would be raised, and glossy.

No, but PPCC has an awesome picture of him in it.

OMG, yes! Thank you -- I'll rectify this as soon as possible.

It's not just this film, it's all of Manmohan Desai's extravaganzas! I'd hang out with his wardrobe dept anyday just to listen to the stories:

"One day he came in and asked us for a Victorian dress that Amrita Singh could wear to fly a plane..."

Hi everybody! I don't know where to begin but hope this site will be useful for me.
I will be happy to receive any help at the beginning.
Thanks and good luck everyone! ;)