The child is father to the man

A brief introduction to the the cult of Rishi Kapoor:

Despite some bobbles during the '80s, he's had a long career, playing strong romantic leads from 1973's Bobby to 1989's Chandni (both named after their heroines -- I may already be onto something about his appeal). Along the way, he also stole some larger ensemble films with his comedy roles. He's since gone on to a second act playing fathers and wise uncle figures, and in 2010 is up for Best Supporting Actor (thrillingly, along with his first romantic costar, Dimple Kapadia) in this year's Filmfare Awards. Go, Rishi!

But probably the most important background that a new viewer needs to know is that Rishi is part of the famous Kapoor family. He's the uncle of today's superstar Kareena, the nephew of iconic stars Shammi and Shashi, and the son of the super-iconic Raj Kapoor, who I always want to tag as an "impresario." Well, why not: he wrote, he directed, he starred, he discovered new heroines, he steered the music, and generally strikes me as somebody with an ego larger than life.

Rishi made his debut playing his father's character as a young man in Mera Naam Joker, but since that's over three hours long, and the word "self-indulgent" is the single most common description I've heard, I'm not going to sit through that -- not this week, anyway. Still, get a look at that chubby schoolboy in this clip (but beware, he's tormented by the thought of a naked chick at the end. Don't want to startle anyone. I was certainly startled. That's Raj for ya). Likewise, his first starring role was also in one of his father's films, the iconic teen romance Bobby (more on that later).

When I started with the Bollywood, I was almost immediately dubious of Raj, just from the looks of him. When I finally got around to seeing him in a movie -- Shree 420, to be precise --I knew all about the Charlie Chaplinesque Everyman figure he was supposed to play, and was psychologically prepared to be irritated by it. And yet, the film had barely started before I found myself totally drawn in by "Mera Joota Hai Japani" number, especially Raj's one-handed arm flings. I tried to do a screenshot, but it's all in the movement, so I gave up.

What was I finding so endearing about Raj's musical numbers, especially compared to his acting overall? The song itself is great, but that's no excuse. He wasn't exactly grateful, at least based on this specimen. On the contrary, he was kind of stiff and awkward. Then it hit me: he reminded me of Rishi! Rishi is graceful more often than not, but I have seen him occasionally look awkward, and even in those moments, he remains deeply likeable. More exposure has proved to me that I do, in fact, like Raj pretty much only to the extent that his performance reminds me of his son.

Here's the original version of Karz's famous "Om Shanti Om" number, which at full length is even sillier than the Shahrukhized version: http://www.youtube.com/watch?v=eS29KERO_d4.

Rishi is definitely having one of his more awkward moments here, especially while climbing onto that spinning platform. During one viewing among many, it suddenly struck me: it looks for all the world like it wasn't even rehearsed. Like they got the thing working just in time for the shoot (reminiscent of the shark in Jaws), or else they just said, "Yeah, well, and then we'll lower you down and you'll jump off," and he's trying to figure out how to do it without wiping out, live and on camera.

But for the most part, he's so buoyant and happy. And he seems to have such confidence in himself. As someone who has sometimes been a sucker for angsty men, it's refreshing to see someone on the screen who seems to be having a plain old good time. That quality spills all the way over into effervescence in Amar Akbar Anthony, especially in his musical numbers, but even in the quick bits like his keeping a hospital bed booked (the better to woo pretty doctor Neetu Singh).

But more on those topics later.

For now, let's use the "Jhoot Bole" number in Bobby, for which I can't find a decent quality video on YouTube, to explain Rishi's career. In this corner: a beautiful, sexy girl in a filmy, midriff-baring costume, bursting with energy and dancing like her life depends on it! 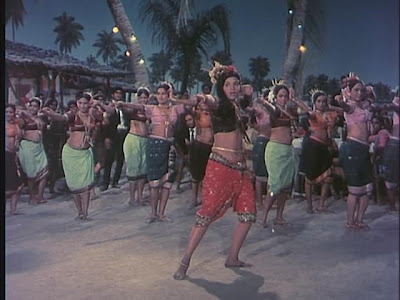 In the other corner: a soft, squeaky-clean, Mama's Boy-looking nerd in a powder-blue pantsuit. 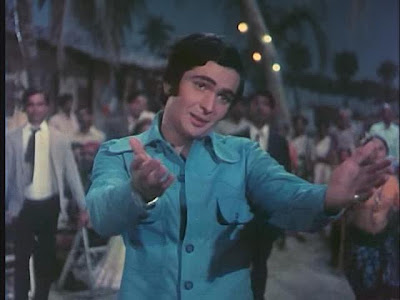 But he's such a happy, adorable puppy! I am totally willing to believe these two disparate souls will fall in epic love.

In Shree 420, Raj proves he can do both the nerdy innocent and clean up to become a suave gentleman. For the most part, Rishi seems to have gotten a double dose of the nerdy gene. Fortunately, that's my type.

Posted by Anarchivist at 7:28 AM

Have you seen Chintuji? Rishi plays himself as a self-absorbed has-been and is GREAT in it.

Yes, I loved Chintuji! And his willingness to portray himself as such a jerk. My favorite part was when someone in his entourage was all like, oh, Neetu's in Switzerland, and someone else was like, OMG, don't tell him that! Tell him, umm, she's at the temple, praying for his recovery. I totally LOL'ed.

And obviously, Rishi talk totally, like, brings out the Valley Girl in me!

I adore Rishi Kapoor for exactly the reasons you so winningly list out.

For as much as everyone falls all over themselves to praise the Big B for AAA, we all know the movie really belongs to Rishi's sensitive and snappy Akbar.

I think of the cult of Rishi as more of a group activity than say the cult of Shashi which works fantastically even as a solo activity. Ahem. But then I might be biased.