After Layla Majnu, I popped in Love Aaj Kal (2009), a Netflix that had been lying around for a few days. Until it started, I had completely forgotten that Rishi Kapoor is in it, playing an Elder Statesman of Love, a la Delhi 6. 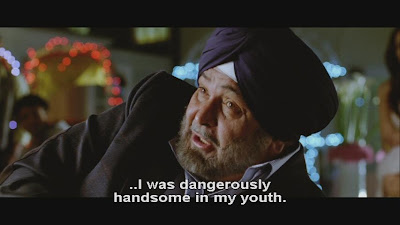 We've just been gathering loads of evidence about that, yaar.

Saif Ali Khan and Deepika Padukone play modern lovers who openly reject the idea of a Layla Majnu "one soul in two bodies" kind of love. They've been together two years, enjoying the relationship without any kind of overt commitment. When their careers take them in different geographical directions, they break up amicably, staying in touch by phone and chat, in many ways more honest with each other than when they were dating.

But once they start seeing other people, each is more conflicted than either wants to admit. Eventually, the story that the friendly coffee shop owner (Rishi) is telling Saif, about the extremes he once went to for love, starts to resonate more strongly with that of his contemporary counterparts.

Among other things (like the fact that Saif's rebound girlfriend isn't the total blonde bimbo she at first appears), I really enjoyed the whole subplot about how Saif gets his dream job, and moves to his dream town (San Francisco). At first, he's ecstatic. Everything is exciting and new. But eventually, as we see in montage, the dream job becomes just the job he goes to every day. He sinks into a dull routine. Even apart from the whole lonely lack-of-love thing, movies rarely show the kind of let-down that can occur after a life goal has been achieved, when there's an accompanying high, and then it's back to normal life again.

Above all, the ideas about love -- that people can fall in love whether they believe in it or not; that making a relationship can be just as hard if the obstacle is family honor and disapproval, or just knowing your own mind; and that choosing plain old commitment can be as squishily romantic as some huge romantic gesture -- are all ones that I just really, really like. There's a reason why Persuasion is my favorite Jane Austen novel, so while I can sob over a sweeping Bollywood melodrama with the best of them, a romance that's balanced with realism and tempered with cynicism is sometimes even better.
Posted by Anarchivist at 8:26 AM