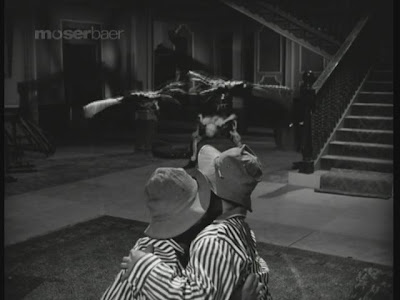 I have to give super-kudos to Memsaab for bringing 1966's Bhoot Bungla to my attention, and covering everything we really need to know here, including the presence of R.D. Burman as a comic sidekick, and the great Ted Lyons as a bad-boy gang leader.

What we have in Bhoot Bungla is a classic mid-sixties Old Dark House comedy, which looks and feels completely contemporaneous with Hollywood productions like The Ghost and Mr. Chicken and The Ghost in the Invisible Bikini (which Filmi Girl just blogged about here --yay!), both also released in 1966. Only with the addition of good music -- Burman wasn't just there to cower in the face of dancing skeletons, after all -- and even a little social commentary for the kids. The spooky ambience is handled very well by Mehmood, who also gives the most restrained performance I've seen from him so far. Since he directed, and gets a story credit, I've had to consider the possibility that his annoying comic performances might be a matter of giving people what they wanted.

I've been taking a class in basic video production, and I have to say, even rudimentary background about filmmaking gives me more appreciation for the effects that were done in earlier films, with the technology available at the time. The phrase "they did it with mirrors" is clearly applicable in this film, but knowing that doesn't make the wizardry any less impressive to me. 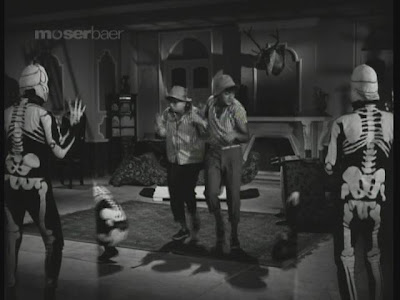 The famous Victorian stage illusion "Pepper's Ghost" was also done with mirrors, but that fact doesn't dismiss the effectiveness of the effect. Similarly, Mehmood didn't have access to anything like our easy-to-use digital technology, and he'd never even directed a film before, so I really have to give him credit for those dancing skeletons, and the overall air of suspense.

Since I also have a fascination with urban architecture in films (I could watch The Warriors just for the shots of subway trains and run-down tenements, so luckily the movie also has other virtues), I also appreciated the visuals in the poignant song “Jago Sonewaalon Suno." There's a great shot where the camera makes a 360-degree turn, from Mehmood to Mehmood, around the empty fronts of high-rise buildings. It's clearly on a soundstage, but it still looks great. 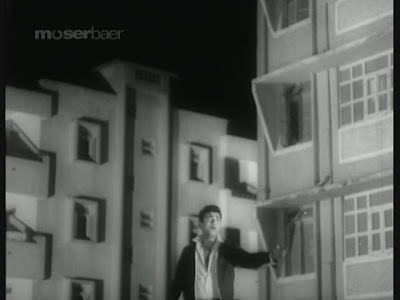 If you go looking for this -- which you should, or what's wrong with you? -- be aware that Nehaflix lists it under the title Bhoot Bangla.
Posted by Anarchivist at 10:03 AM

Aww. I'm glad you liked it too :) It now resides on my "favorites" shelf (which is becoming overloaded)...

I was expecting to enjoy it, but not only did I like it, it was actually good! As we know, the two don't always go together.

Another one in the queue!