Prologue: "Here, cautious vent can be given to stifled impulses"

The first five minutes of Winnipeg director Guy Maddin's Careful (1992) is among the funniest things I have ever seen. And it probably says more, in its bizarre fable-like way, about the environment in which I was raised than I could otherwise explain. The film is set in a fictional European village that is in constant danger from avalanches, that can be triggered by any sound, thus mandating near-total repression of movement and sound.

The rest of the movie can't live up to this opening, and frankly, it doesn't, becoming more weird-for-weird's-sake. That sounds promising, but it gets tiring. As an introduction to some forthcoming thoughts on Bollywood and Scandinavian-American culture (No! Really!), and since there's nothing on YouTube but this trailer, I'm transcribing the words of the dour narrator, with a few notes in parentheses. It seems exaggerated, but it is all SO TRUE. 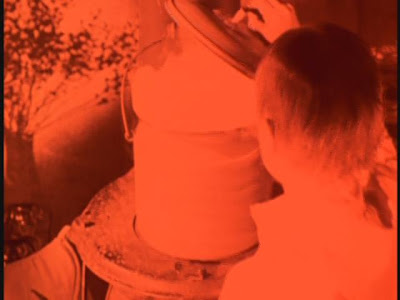 Children, heed the warnings of your parents. Peril awaits the uncautious wayfarer, and screws grief where laughter once played.

I'm sure you can live without that.

Nature has built for us a beautiful world. Allow yourself to drink in its wonders safely. (We see people looking through binoculars).

The path must be climbed with the sure-footedness of a mountain goat. But beware of your skill at climbing. Skill assures nothing!

The heedless heart can be lured to dangerous heights, the sudden ice field, where a single worn stone prying loose from the path can serenade you with the whistling wind of the death plummet.

Then there was always the avalanche. When the snow relaxes its grip on the slope and is dragged downward under its own crushing weight.
The slightest sound. (A man sneezes).
For any false move by anyone can trigger these deadly landslides and sweep all into oblivion.
Guard yourself and your neighbor against making that fatal sound.

Be vigilant.
You have your binoculars. Use them!

While clutched to his mother's bosom, a baby in Tolzbad once lost an eye when a carelessly unpinned brooch pierced right through the baby's eyelid. As if infected with this carelessness, the same baby, by then a grown swan-feeder, lost his other eye when he got too close to a clock.

Caution is not enough for the blind.
It wasn't long before the swan-feeder too heard the loud song of the wind.

"You should never hold a baby's face near an open pin." (A different old-timer says this, as a proverb).

Once an avalanche started by the single bleat of a lamb uncovered all the graves.
The dead had been so well-preserved by the ice, long-dead youthful husbands were revisited by their brides, now withered and old. And young parents, by their old children. Henceforth, before burial, all the dead had their hearts perforated with the long nail of the coroner, just to be on the safe side. And ever since, to prevent a repetition of the tragedy, all farm animals have their vocal chords severed.

Absolute silence is required of us.

Children, sit still. The noise of your play must be muted until you comprehend the risk you represent.

Keep a lid on it!

Don't stand so close to the walnut tree!

Don't put too much pepper on it.

After long research, I have discovered the existence of mountain nodes, rare and extremely hard to find places, quirks of the mountain ranges, where all sounds sent up are perfectly canceled by their own echoes. For here within these acoustic shadows, no dangerous noises can escape to let loose the crushing mass of snow. Here, cautious vent can be given to stifled impulses. We can sing, laugh, cavort, but I must stress, even though safety is assured by the acoustic laws of the ranges, we must not believe ourselves safe.

For always there is wild uncontrolled sound of nature. The terrifying time, twice yearly, when the noisy flocks of migrating geese pass overhead.

And where death passes its hand, all will be white.