It's Magic, You Know. Never Believe It's Not So. 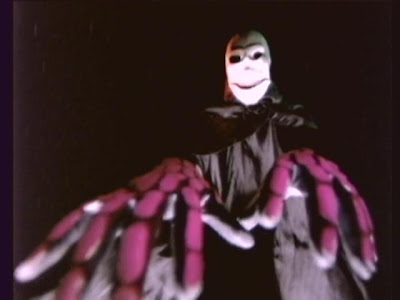 "For those who Believe in God and Universally Accepted Creation, Known or Unknown." So begins the opening sequence of Jadu Tona (1977), and I think that's vague enough for me to agree to. More than that, however, I believe in Good, Old-Fashioned Skeleton Gloves, and the kind of movies that have a picture of the Amityville Horror house on the cover, when there's nothing like it in the movie. This one throws in a pleasant Feroz Khan/Reena Roy romance, an eccentric Ashok Kumar, and a Hanuman-based miracle, thereby making it my second-favorite Hindi film with an Exorcist flavor (although neither this nor top-choice Gehrayee, which I desperately need to re-watch, is any kind of straightforward copy).

Oddly, we are not in Ramsay Brothers Land, but in another equally strange place -- the one belonging to director Ravikant Nagaich, who was soon to bring us the Mithun Chakraborty spy pictures Surraksha and Wardaat. I haven't seen either of those yet, which is obviously another thing I need to remedy ASAP. Let me know if you come across any grants to sit around and watch films, because I need one.

This whole movie is available on YouTube (alas, not subtitled), which means: so are the awesome credits. There's some "Tubular Bells"-like music, along with some hints of Giorgio Moroder, and some multicolored, shadowy hands and skulls. Then we get a montage of images, stock footage, and references to different religions, along with more deep narratorial wisdom: "This cosmos which is seamless is a locked treasure of countless secrets! The truth is not just what we can see. The things which we can't see are also true."

Also, the movie is dedicated to "The Vibrations (Bombay)." I wish I knew why!

Fortunately, this isn't Haxan, so a storyline does kick in: a big-city man brings his two daughters to visit their grandparents in an isolated village. He scoffs at the illiterate, superstitious yokels who tell him to greet the banyan tree. (The young fellow among the villagers is named Billu, which made me wonder if his dad is a barber, but he needed to work as a servant to earn extra money). As they pass, a black cat glares at the family with a wonderful scorn, but since my littlest kitteh gives me that look all the time, I'm not sure I'd have taken it as foreshadowing.

Older sister Varsha (Reena Roy, who's suddenly all over on my radar), is bored, reading a trashy novel, but little Harsha (Baby Pinky) is delighted by the beautiful countryside. She has a sweet song of celebratory dancing in the fields, singing "There is nothing but love here." Not quite true, since the number is intercut with shots of that sinister cat. Eventually she wanders into a ruin and, finding an old man tucked away there, agrees to get his "medicine" for him.

Before you can say "Linda Blair," she's beset by the forces of darkness, but at least they don't skimp on the visuals. This isn't one of those slow-acting possessions that creep up on the characters, but a more dramatic instant possession, with maximum thrashing about. 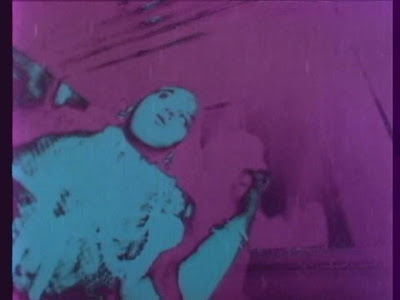 The villagers try to rush her to the Hanuman temple, but she fights them off, having gained super-demonic strength. She snaps out of it when Grandma gets a talisman from the local Saint (who's delightfully offended when accused of being out for money), and they go back to the city. But whenever the bracelet comes loose, or whenever the little girl gets a cut, she starts freaking out again.

Her case -- possibly a form of epilepsy -- comes to the attention of dashing, manly young psychiatrist Feroz Khan, who's moved by the patient's pretty sister. Besides, it makes a break from dealing with people who think they're Prince Salim. He gives her the usual battery of medical tests, but his bedside manner is so kindly that, for once, they don't seem too disturbing.

Before long, with Harsha's condition no better, the servants don't want to work in a house full of bhoots, and Varsha's engagement gets broken off -- not that she's unhappy about that, since she wasn't too thrilled with the prospective groom even before Dr. FK started making house calls. On his end, Feroz gets an appropriately surrealistic love song, addressed to Varsha's bathroom mirror, about how lucky it is to look at her (including, it's implied, in the bathtub). 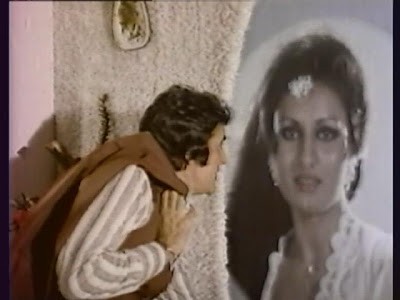 When a shady character turns up dead, and the police learn that the little girl on the scene suffers from violent amnesiac fits, the case is handled by Inspector Jolly Goodman (Ashok Kumar). He has a habit of abbreviating everything, but in a way that nobody around him understands. For example, he has to explain that his comment "Nice ID" is a reference to the "interior design." He's sharp, though, and puts everything together pretty quickly. Given the nature of the case, that means he starts trying to prove the existence of the bhoot that's tormenting the girl!

Eventually it becomes clear that the people dying aren't random victims, but are the bad guys who murdered the spirit in the ruin. Jeevan appears in a leapard-print pillbox hat, with moll Aruna Irani, who's totally wasted in such a tiny non-entity of a part. I was waiting and waiting for her to turn up, and when she did, she hardly even got to speak.

Interestingly, Jolly Goodman is established as a Christian, whose belief in evil spirits causes him to encourage the family to get help from that original village Saint, who follows Bajranbali (Hanuman), or "the ducky of Sita," as he's called in a devotional song. It appears that either Christianity or Hinduism is better than the limited point-of-view of the modern scientific approach, which only exacerbated the situation. At least when it comes to things unseen.

Sensitive animal lovers should note that there's a brief, apparently stock-footage shot of two cats hissing and batting at each other. No sign of any animal injuries, but I know people who'd be disturbed by that.

Speaking of felines, though, here's a shot from little Harsha's bedroom. Growing up in central Minnesota in the'70s, I had this exact same cat picture on my wall, when I was about her age. 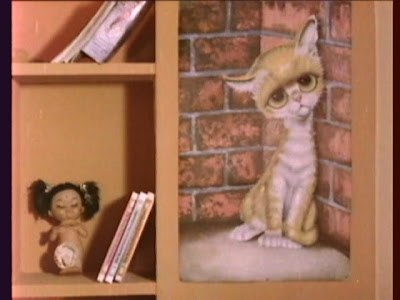 I did not, however, wander into any ruins and get possessed by an evil spirit. Or did I?
Posted by Anarchivist at 3:10 PM

Kindly (but two-fisted?) psychiatrist Feroz Khan sounds like an element more horror films should have.

I came across a clip of this film during #70s Week and have to say it looked kind of hilarious. It actually sounds better than I imagined it could be. I may have to watch it some day if for no other reason than to see the possession scene which seems to suggest that the main symptom of possession is hysterical giggling.

Great find! I wish they had a dvd of this somewhere, but time to check out the Youtube streaming on my Blu Ray player.

Houseinrlyeh: Agreed. Even though he was ineffective, it was nice that he was there to offer his manly moral support.

Christy: Fortunately, hysterical giggling is one thing we're big fans of around here! :)

Anirban: I got a DVD off eBay, so I know they exist. But if subtitling weren't an issue for me, things would be different. And yet, still not practicing the Hindi like I should be!