No Less Than Anybody Else

As Anirpan pointed out in the comments a couple days ago, within a few years of his uber-nerdy film debut in Bobby, Rishi would be playing "coolness personified" in films like Hum Kisise Kum Nahin and Amar Akbar Anthony (and I'd add Rafoo Chakkar to the list) -- a peculiar turn of events indeed. His Akbar is probably the best starting point for understanding the mystery of his appeal: the point where many doubters go, "Okay, I get it." But he's not cool in the Cary Grant mode that his father could switch on; it's more like a hipster cool (for lack of a better phrase). An uninhibited, I-don't-care-what-anybody-thinks cool, kind of like a young Bill Murray cool, only cuddlier, and less in-your-face. 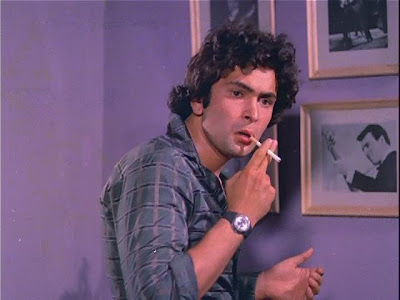 The plotline of 1977's Hum Kisise Kum Nahin is almost too complicated to bother with: it's mainly an excuse for some chases, a few fun scenes, and a bunch of great songs. There's a second hero (Tariq) who's in the earnest leading man mode, and he's okay, but luckily Rishi is there to steal the whole movie. 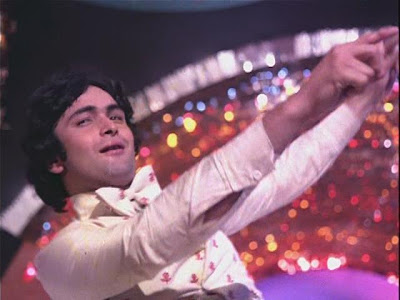 So cool! And that's while he's wearing a freakin' bow tie!

Since he doesn't have the matinee idol looks (except for Laila Majnu, and thank goodness there were cameras around to document the peak flourishing of his manly beauty!), in many of his better films Rishi tends to play a charismatic guy-next-door type who proves himself a hero, partly through conventional heroics (fisticuffs, rescues, etc.), but largely by standing up and doing his thing. His characters are usually creative -- singers, dancers -- and they don't care if their costumes are ridiculous as long as everybody's having fun. For example, I'm not sure I've ever seen a male actor (as opposed to an actual drag performer) look less self-conscious in a showgirl costume than he did in the marvelous Some Like It Hot-esque Rafoo Chakkar. Similarly, in HKKN, like in Duniya Mera Jeb Mein, he plays a character who started well-off (or thinking he was, in the latter case). When suddenly brought low by circumstances, he may not be happy about the situation, but it doesn't fundamentally change who he is or how he thinks about himself.

The kind of cool that's internally driven, rather than depending on how you're seen by the world, seems like a much more "modern" kind of cool. (It sounds absurd to say there's a "traditional" kind of cool, but I think there is). Instead of fitting into a style, it's making your own style. 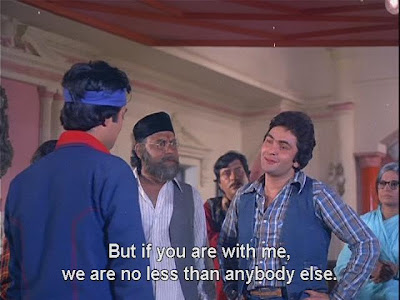 Awesome post and thanks for the shout-out. I totally need to see "Rafoo Chakkar." Maybe next week.

I'm hoping to get my copy of "Rock Dancer" next week! Somehow I doubt it'll compare to "Rafoo Chakkar," though.

It's maybe the kind of cool that comes from being "a Kapoor, the Barrymores of India." I think maybe that's why I didn't warm up much to Rishi ever---his attitude always smacked of entitlement a bit to me (although as you say in AAA I finally "got it" a bit).

:) Sorry. I do love him now, in the past five-ten years he has done some majorly great roles even in indifferent films and stolen the show!

I definitely warmed up a lot more to the "cool" Rishi once I saw how much of a doofus he could be in some of his movies. I find that the nerditude counteracts the "to the manor born" quality. Nerd Love 4 Ever!