"The problem with you intellectuals is that you look for answers in books. So far removed from life!"
-- the wisdom of Flashback Shashi in Doosra Aadmi (1977)

Of course, it's not always shiny and happy in the films of Rishi Kapoor. But after all the melodramatic parental disapproval of Bobby, it is a nice change to see the more everyday concerns of the parents in Doosra Aadmi (alternately Doosara Aadmi, as my copy transliterated it), who argue that the couple are young, don't know each other well, and don't yet appreciate the seriousness of marriage. They ask them to wait, get to know each other better, and then, if they still want to get married, the parents will throw them a big wedding. It's like the earnest advice in a '50 mental hygiene film.

Lovers Karan (Rishi Kapoor) and Timsi (Neetu Singh), however, don't want to wait, so they go to the courthouse, and then it's off to the honeymoon, where Rishi tries to buy condoms without telling the druggist what he wants. I can't be the only one thinking of the famous scene in Fawlty Towers, when the guest unwitting asks if the chemist's is still open. ("I know what people like you get up to, and I think it's disgusting!")

When Karan insists on making his own way in business, further alienating his wealthy father, he becomes determined to hire a woman named Nisha, known as a reclusive genius, as a way to set his new ad agency apart. She turns out to be the glamorous, chain-smoking Rakhee Gulzar, who quickly agrees to the job, much to his surprise.

Before long, they're working late together, and Neetu, charming as the young newlywed who still calls her husband "my boyfriend," starts to feel neglected. Rakhee is nicely enigmatic, getting overly familiar with Karan, but subtly enough that it doesn't seem like alarm bells should be going off. Eventually we discover her ulterior motive: Rishi reminds her of her lost love, his real-life uncle Shashi Kapoor. And Rishi quickly proves his (screen) father right: maybe he was too young and immature to make a life-long commitment, since he clearly likes the attention. I don't care if there's literal infidelity or not, when your husband starts doing romantic song sequences with someone else -- it's cheating.

A few things to mention: usually the presence of dual Kapoors means good times, as in the superlative Duniya Meri Jeb Mein, which I won't bother to blog about, since the ultimate post on the subject has already been written here. Sadly, because of the whole flashback situation, they don't get to act together.

Also, as someone who recently absorbed two seasons of Mad Men in about a week, it interested me how Rishi's character comes to realize how much of a hollow man he is ("I have no identity of my own.") His earlier rebellion, and his ambition to prove himself in business, hasn't stopped him from letting himself be led by circumstances, and trying to be what other people want him to be. He'd fit right in at Sterling Cooper; maybe it's an occupational hazard in the world of advertising.

Costumes, by the way, are partly credited to "Jennifer Kapoor." I like to think she's responsible for Rakhee's outfits, which have busy '70s patterns, but still manage to look lovely. Rather than anything that might be seen at the hilarious Ugly, Ugly, Bollywood Fugly site.

And here's a little motto for the online Shashi Club: 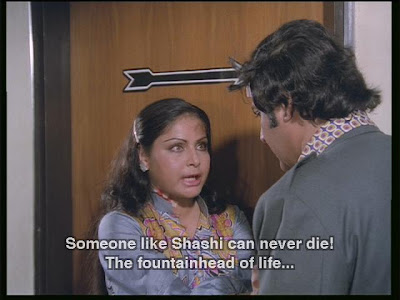 I loved to hate this movie, but in the end, a few months after seeing it, I think I really, really do like it. It's smart and unusual and I like exploration of relationships to make them more three dimensional.

It's a lot more serious of a movie than I tend to watch, and/or blog about, but that's okay for a change of pace. Rishi/Neetu definitely made it a lot easier on me!

Ha ha! Great screenshot and subtitle!!!! I haven't seen this one but if Rakhee and Shashi are in it I will!