I have a necklace with an antique Ganesh pendant that I wear quite a bit. Once in a while, someone will comment on it, but not very often. One day, a frequent customer spotted it and said, "That's Ganesh, isn't it?" When I said yes, he began to regale me with how much he loves Shiva, the Goddess of Death, because she gives such tough love to her devotees. "You might be thinking of Kali, dude," I thought to myself, but this is someone I'm used to dealing with in "smile and nod" mode, so I continued to smile and nod.

About an hour later, another customer came in, clearly someone with developmental issues, but pleasant enough. Once more: "That's Ganesh, isn't it?" When I said yes, he added confidently, "The Remover of Obstacles." When I agreed, he beamed and added, "I know that from The Cheetah Girls: One World." He went on to explain that there's a whole Ganesh-related subplot in the Cheetah Girls movie.

Oh, great, I griped inside my brain. Now I feel like I must watch this, just for the morbid curiosity of it all! So I got the movie at the library, brought it home, put it in, and, inundated with trailers for Disney products, just couldn't bring myself to do it. I turned to my pile of recent and semi-recent purchases for solace, and what did I see: a picture of Rekha with black lace gloves and an enormous, crazy-shiny bow on her head. Khoon Bhari Maang (1988) it was!

I can't image that anyone who reads my blog isn't also reading Memsaab Story, which is where I first heard about this miracle of science, medicine, and plastic surgery. Really, click the link and read her review -- and pay close attention to the photos -- but put down your beverage first, or I won't be accountable for the consequences.

From her review, I recognized the storyline immediately from something called Return to Eden, which I watched religiously on late night TV in the 1986-1987 school year. What we've got here is: an Eighties Hindi film knockoff of an Eighties Australian soap opera knockoff of Dynasty. With crocodile attacks (both versions). If anyone knows of anything that sounds more ridiculous, please let me know ASAP -- just keep in mind I've already seen more than my fair share of Mithun movies.

Just for background, compare this with this. Isn't it great that we can have both?

Since I just did a Goddess film overview, I have to mention the devotional opening, which started things off with a lovely image of Sarasvati. I couldn't help thinking of that part in Kal Ho Naa Ho, when Shah Rukh tells the singers to quit torturing Sarasvati with their out-of-tune worship. Hopefully, the Goddess of Art and Wisdom appreciated this crazy artifact. And then, OMG -- how did I not realize this was directed by Rakesh Roshan, of Koyla, Karan Arjun, and Hrithik-spawning fame? His movies are always insane!

As the movie begins, Rekha is all dowdied up, with a smudge on her face that I think is meant to be a disfiguring scar, and frolicking about the estate with her cute little children. She's making an effort, but she's sad, because she's a widow. Little does she know how lucky she is! The phone rings, just in time for her to unknowingly hear her father's murder. Then her "best friend" and the friend's lover cook up a scheme for him to marry poor bereft Rekha for her fortune. The friend doesn't know that he intends to kill her, and well, neither does Rekha, obviously, until she's standing up in a boat, merrily snapping photos of a crocodile, and he shoves her right in.

Luckily, she survives. Oddly, the most damage seems to have been done to her face, which is now really disfigured. Like the beast just wanted to mess with her more than eat her. Once recovered, she gets plastic surgery, and returns home with an assumed name, to supplant her former friend as a top supermodel (and as Memsaab has hilariously documented, oh the horrors of '80s so-called "fashion"!) and take revenge on the man who ruined her life.

Now, I understand, when someone has pushed you into the waiting jaws of a crocodile, you might be eager to indulge in a little croc-feeding of your own. However, just going to the police would actually make life a lot easier in the long run. And what about the children? Somehow, Rekha seems surprised to discover than this guy hasn't been nice to her kids. Maybe his throwing her to the crocodile was a warning sign?

Two things I have to add: what's going on the world when a film contains a disco version of the "Chariots of Fire" theme, and the music wasn't even by Bappi Lahiri? I have to wonder if Bappi feels ripped off.

Secondly, we are all familiar from disco films with the scene where the hero faces his rival in some kind of dance-off. Here it's a sort of catwalk competition. I know we're supposed to be rooting for poor wronged Rekha, but sorry -- not in that pink monstrosity she's wearing! If I were judging, the bad girl would win in a landslide: 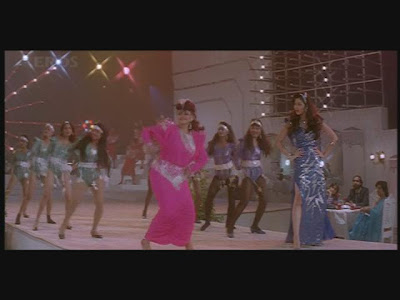 In the interest of historical preservation, here is my review of Return to Eden (the ongoing series, not the more Khoon Bhari Maang-like mini-series, which I still haven't seen, and yes, there's an emptiness in my life). It appeared in The Time/Space Continuum, the proto-blog I wrote and sent to one subscriber (my sister) when I was college. DVDs of the show are available, but you'd need an all-region player. Fortunately, there are clips on YouTube, including this one of the original croc attack, and a random office scene that features some of those ugly hats. I was actually shocked to discover a different actress played Jilly in the miniseries...maybe she had plastic surgery too.

Adam and Eve Are Turning in Their Graves

When Dallas and Dynasty get dull, it's nice to know that their fine traditions are being carried on with truly awe-inspiring tacki- and tawdriness by the imported nighttime soap Return to Eden, the obvious low budget of which gets in the way of its attempt to portray the life of "the richest woman in Australia." Peta Toppana, formerly the nice, long-suffering "Kahr-en" of Prisoner: Cell Block H, plays Jilly Stewart, the half-sister and evil nemesis of mining heiress Stephanie Harper (Rebecca Gilling). In recent episodes, Stephanie has lost the business she ran, the family home (an estate called Eden), and the plastic surgeon husband who repaired her face after a near-fatal crocodile attack. Although wealthy and eligible men regularly fall all over Stephanie, she is known in my social circles as "the Lizard," due to her weird eyes and facial contortions. And come on, no real millionaire would allow her only daughter -- a supposed fashion designer, no less -- to dress like such a frump. Featuring the ugliest hats in soap opera history and throwing the word "bitch" around at every opportunity, this show has plot lines that edge right out of improbable and into the utterly ludicrous. If you can find it on late-night tv, it's a don't miss!
Posted by Anarchivist at 10:02 AM

Now, I understand, when someone has pushed you into the waiting jaws of a crocodile, you might be eager to indulge in a little croc-feeding of your own. - croc feeding is fine. But what had her poor viewers done to her that she avenged herself with those eye-scarring fashions?

In a contest between Return To Eden and Khoon Bhari Maang - which one takes the prize for maximum fugliness?

I would say that Khoon Bhari Maang definitely raises the bar, fashionwise. The clothes are sort of -- breathtakingly awful. Even almost parodic. (And yes, red Google underliney thing, "parodic" is a word. Sheesh). Of course, they're no less eye-scarring for all that, though.