Some of my fondest Christmas memories are of the years my sister and I were in college. We both had breaks at the same time, as did my nephew (then in the kindergarten/1st grade range), so we could all pack up and go together to our parents' house in our old hometown, for as long as the university gave us. That meant a lot of cookie baking by day, cable TV by night (exemplified by this clip from USA Up All Night), and putting whipping cream in my coffee instead of milk. Oh, the luxury and decadence!

One of those years, one of the cable channels was showing The Man From U.N.C.L.E., a show which, along with the original Star Trek and the campy Batman series, obviously had an undue effect on my aesthetic at an early age. 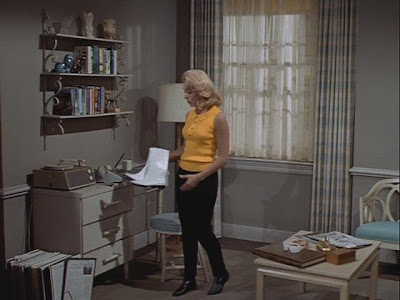 Look at those go-go boots! Then there's this shimmery gold number, with matching gold belt and boots, completely upstaged by the thought: "What's the deal with her bra?" 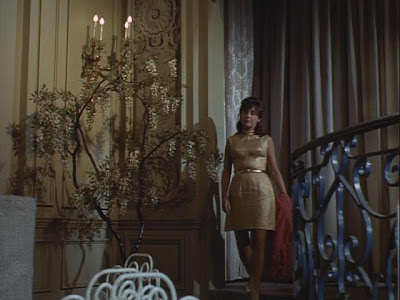 Since the show was canceled shortly after my fourth birthday, I really didn't remember it except in the vaguest way, so the mid-to-late '80s was really my introduction to the wonderful world of '60s spycraft.

The box set just came out, and it's 105 episodes, so it'll take me a while to digest. So far I've watched the first two (black and white) episodes, plus a voodoo episode, a "discotecque" episode, and a thuggee cult episode, choices which should surprise no one. All of them are titled "The Something or Other Affair," so, for example, the voodoo one is "The Very Important Zombie Affair."

Forty years later, seeing those first episodes finally explained the show's title. I always wondered why it was The Man From, when it should have been The Men From -- being the adventures of American agent Napoleon Solo (Robert Vaughn) and his partner, Russian agent Illya Kuryakin (David McCallum). Although second-billed, Illya barely had cameos in the early shows. The show was originally even going to be called Solo (and by the way, it's no surprise that Ian Fleming himself came up with that crazy name for Vaughn's character).

It's a good thing they changed that, since McCallum is much the cuter, although neither of them is exactly painful on the eyes.

The first, Solo-centric season is more of a straightforward spy drama. By the second, with two leads, the show can get quippier and more fun. Napoleon is humorously smug, and prone to giving the bad guy looks like he can't believe their stupidity. Illya takes a more detached approach to proceedings, and makes sardonic comments like "It's amazing how quickly a girl can take her clothes off, and how long it takes to put them on again."

Then there's the bad guys: 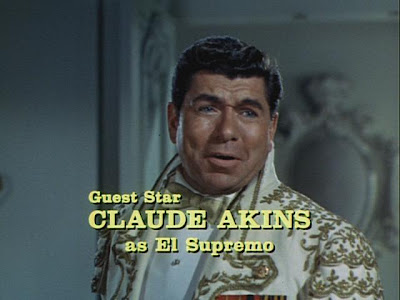 He looks more like a wrestler from a Santo movie than a Papa Doc-eque Caribbean dictator.

A very interesting aspect of the show is its all-pervading air of casual paranoia. The aw-shucks good-old-boy who grew up on the farm down the road in Iowa (played by Slim Pickens!) is secretly spearheading an elaborate, atom-powered conspiracy to overthrow a Central American government. Cleaning services smuggle explosives in vacuum cleaner bags. The dopey nightclub DJ, egging on the most uncoordinated go-go dancers I've ever seen (a little reminiscent of Disco Godfather, oddly enough), is really a secret agent who'll kill anyone with a look from his boss.
Any small shop could be a front for U.N.C.L.E. or their nemesis organization, T.H.R.U.S.H. People even live in the apartments around the tailor shop that serves as U.N.C.L.E.'s entrance, and one of them starts to bring unwanted attention on the secret organization when they raise the rent to cover renovation costs -- ha!

At the same time, unlike more contemporary spy shows like La Femme Nikita or MI-5 (a.k.a. Spooks), the U.N.C.L.E. agents never seem to doubt the rightness of what they're doing, or what side they're on. They have a strong moral certainty, despite acknowledging they're in a world where nobody can really be trusted.

So if you'll excuse me, time to put some egg nog in my coffee and continue enjoying the pleasures of a "Voodoo-a-Go-Go" Christmas...
Posted by Anarchivist at 1:20 PM