I watched Kyun! Ho Gaya Na for one reason, and one reason only: 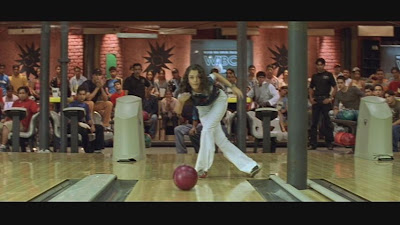 It looks like a cool alley too, with a starburst decorative motif. Then, immediately after the tournament, there's a song that features dancing in the library, something of which I'm very much in favor. It unfortunately also includes Vivek Oberoi knocking over stacks of books, something I very much oppose.

That's this movie all over: an entertaining trifle with a few marks against it. Like Vivek himself. I remember thinking he was quite good as the Cassio figure in Omkara. But in this movie at least, he's a pretty colorless hero. It doesn't help that he's playing the kind of guy who would wash his car during a romantic song sequence. It's Aishwarya's fantasy, too, which makes me suspect even she thinks he's a little dull.

In his character's defense, Vivek is introduced during an auto race, something I would normally be completely uninterested in, except for the fact that it's called the Coffee Day International. Now we're talking! I take part in the Coffee Day International every day, on the beverage-drinking level. Thanks to the wonder of the internet, I've learned that Coffee Day is a brand of coffee in India, so this was probably sheer product placement, but I enjoyed it just the same.

Much the same way I took Amitabh Bachchan's context-less catchphrase "C'mon Charlie!" as a personal shout-out to my cat. Why not? That makes as much sense as anything else.

There was a plot, by the way: mismatched young couple fall in love despite themselves, and instead of trying to drive them apart, their elders conspire to bring them together. Along with a gaggle of adorable orphans, who didn't even annoy me that much. Among the elders, I really enjoyed the sight of Tinnu Anand -- always 100% awesome, but a bit buck-toothed and funny-looking -- as the father of the Most Beautiful Woman in the World.

I also appreciated that the movie was dedicated to Geeta Bali. I had to look up motives, too: according to the Wikipedia, producer Boney Kapoor's father Surinder had been her secretary. Whatever the personal reasons, it was nice to see, especially so long after her death. Usually, when someone dies, the memorials start strong, but then they taper off. I prefer to see people remembered.
Posted by Anarchivist at 6:37 AM

I actually really liked this, it is a fun bit of froth! :) Thought I was the only person on earth who could tolerate it...(I also kind of love VO because if I were a famous person I would also forever be putting my foot in my mouth and everyone would hate me)...

I wasn't in the loop back then, but frankly, anyone who would call a press conference to rag on Salman Khan is okay in my book! Although if it were me, I'd be condemning his wardrobe.

I was just thinking of all the Bollywood celebrities like Vivek who are on Twitter now, and imagining THE PRESSURE a famous person would be under, trying to come up with good/proper/useful/interesting things to tweet to their 20,000 followers/fans. What to say, what not to say, too much information, too strange, not personable enough... it's a fine line.