The temperature is actually warmer than it's been, but looking outside, the world is still bleak and frosty and white. Inside, I'm chilly and flu-ish. I wasn't happy to see that the movie I picked to watch, more or less at random, contained an opening "thank you" to the Simla Ice Skating Club, but I stuck with it.

The movie takes a more promising turn when Manoj Kumar picks up a girl by the side of the road on a rainy night. She's strange, but in a way I can relate to. 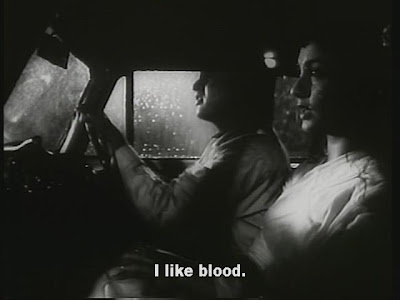 Then she asks him to drop her off at the gates of the cemetery, where she mysteriously disappears. 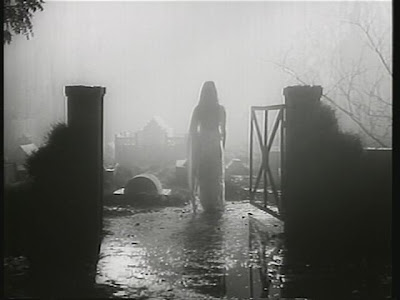 After a recital of these events wins the coveted cry of "Bhoot!" from an old lady, the story settles down into Dr. Manoj Kumar's love life. He seems engaged-to-be-engaged to peppy Seema (Helen, who shines in her brief role, despite an unusually conventional wardrobe), while the boss's daughter, fellow doctor Lata, is clearly pining over him. When Seema drops dead of a cyanide injection (I was really hoping it would be a "spurious" one, but apparently not), suspicion clouds the gaggle of doctors.

This is all mostly forgotten, though, after he sees the ghost girl again, already dead when he arrives at a deserted mansion to treat her, and yet again, when he unveils her on the night of their arranged marriage. Much angst and suspicion ensue. More surprising is that Manoj's million dollar inheritance, mentioned in the first fifteen minutes or so, is also completely forgotten in the midst of these domestic woes.

Eventually, the cast decamps to Simla (aha!), hoping the rest will sooth his strained nerves, although cavorting on ice skates would not have that effect on me. Curse those weak ankles! While there, the comic servants discuss the ways of bhoots at some length: time means nothing to them; they don't need to wear winter clothes, which would be very handy; they generally do their singing between 1 and 3 am; and they like to sing film songs. After all, why should the dead be any different from the rest of us?

Saner people than me (hi, Memsaab!) have pointed out that this is a slow-moving story, Manoj is pretty dull, and the "mystery" is perfectly obvious. But frankly, some days all I want is a shadowy house full of cobwebs, misty cemeteries, organ music tinged with wind effects, and sinister holy men. Let's just say I've watched worse things on a gloomy day. But please, the next time you marry a doppelganger, save yourself some turmoil and look into their family history.
Posted by Anarchivist at 11:57 AM

Hi Anarchivist! :) I am pretty sure I would have enjoyed this film much more had I seen it in your company. But alas, I did not.

Ghosts dont need winterwear? No wonder they can flit about so fast, without heavy coats and boots. :-)

This movie suffered from what I like to call "The da Vinci code-complex" - the mystery builds up and you expect a nuclear explosion at the very least but what you get is a damp fire-cracker at best! But OMG the Sadhanas were so beautiful. :-)

When I'm a ghost, I fully intend to trip merrily down the sidewalk on cold winter days, gloating at all the poor suckers who are bundled up and miserable. Especially the ones shoveling their sidewalks. Thank goodness there's something to look forward to!