Americana Spookerama: The Return of Dracula (1958) 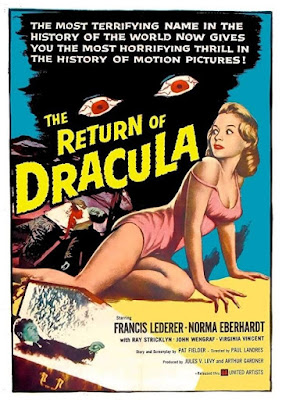 Director Paul Landres and screenwriter Pat Fiedler followed up 1957’s The Vampire with a second foray into the American Gothic that directly mixes traditional supernatural tropes with a contemporary small-town setting. This time, the vampire wasn’t created by modern science, but instead is from the “old country,” and does all the things an audience expects: he sleeps in a coffin, suspiciously avoids mirrors, and hypnotizes young women into doing his bidding.

All this takes place, though, in a California town described as “most picturesque,” and this Dracula, stealing the identity of an Eastern European artist, finds himself in the bosom of a nosy, cozy American family, named -- two years before the airing of The Andy Griffith Show -- Mayberry. There’s a blustery widowed matriarch who bakes blueberry pies, a starry-eyed teenage daughter, and a rambunctious, Opie-like young son. Dracula could pack up and leave at any time, which seems like it would uncomplicated his life, but he does have vampire hunters on his trail, posing as immigration officials, and the Mayberrys provide a cover to explain his presence.

While this kind of wholesome small-town setting was still an innovation in horror films of the time, similar backdrops were previously used in thrillers, and various commentators have noted this film’s family resemblance to Alfred Hitchcock’s Shadow of a Doubt. This is especially noticeable in Dracula (a.k.a. “Cousin Bellac”)’s relationship with teenage Rachel. The actress, Norma Eberhardt, starred the same year as a bad-girl juvenile delinquent in Live Fast, Die Young!), but here she is almost aggressively wholesome, even by the standards of a 1950’s B-movie.

Apart from her romance with Tim, the literal boy next door, her social life revolves around her closer-knit nuclear family, and the patients at the local nursing home (a brave blind woman and a group of ‘60s-sitcom-ready elderly gossips), for whom she’s planning a big Halloween party. At the same time, she feels restless, identifying with the artistic cousin she sees as more cultured and sensitive than her boyfriend, an ordinary teenager she scolds for his lack of refinement. 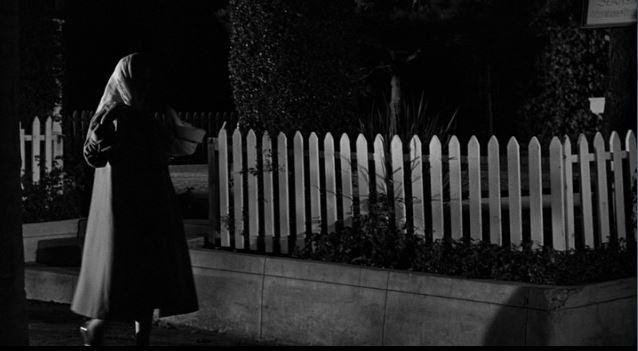 Dracula’s vampiric nature is for a time explained away as artistic eccentricities, and a reaction to how confined and repressed he’d been in the old world, the filmmakers taking advantage of the fact that Transylvania was, at the time, under Communist rule. “That’s why I’ve come here,” he tells her. “For freedom. I must have it.”

Despite her loving family and placid community, Rachel identifies strongly with him, saying that “I could feel the pain you felt, and how you wanted to express yourself, but couldn’t. I know how that is. I feel the same way, too, sometimes.” She has already learned to stifle and downplay her ambitions; while dreams of being a fashion designer, “I guess I’ll end up being a nurse.”

Later in the film, when she confronts Bellac about his distance from the family, he asks if “there’s a price for your acceptance, for me to conform, to be as you would want me to be,” adding, “if my behavior seems different, perhaps it is because it serves a higher purpose than to find acceptance in this dull and useless world.”

Here, he uses the relatable angle of independence and individualism as an excuse for his evil behavior against those he thinks are beneath him. The Return of Dracula ultimately comes down on the side that non-conformity to the expected social norms is a warning sign, rightly suggesting that the non-conformist is a danger to those around him. This certainly plays to a conservative audience, satisfied with the rightness of their beliefs, which would reject these ideas from the mouth of the villain.

This judgment, though, exposes an irony. The family’s real artistic cousin was escaping Communism, coming to America for freedom, wanting to live his own life and express his individuality, and this societal contradiction is there to be noticed by any members of the audience who share Rachel’s vague dissatisfaction with the status quo.

The tension between the ideal of American individualism and the reality of the need to conform, especially in the culture of the 1950s, was explored by psychologist Robert Lindner, most famous today for coining the phrase “rebel without a cause.” In his 1956 book 1956 book Must You Conform?, he called it “the most vital issue of our era,” the thing that “can be said to characterize the time we are living in … the extreme tension that exists between the individual and his society” (p. x, 149). The pressure to “adjust” and conform means that “uniqueness, individuality difference … are viewed with horror” (168). 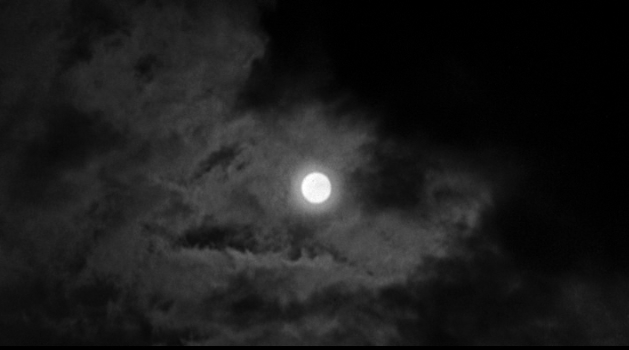 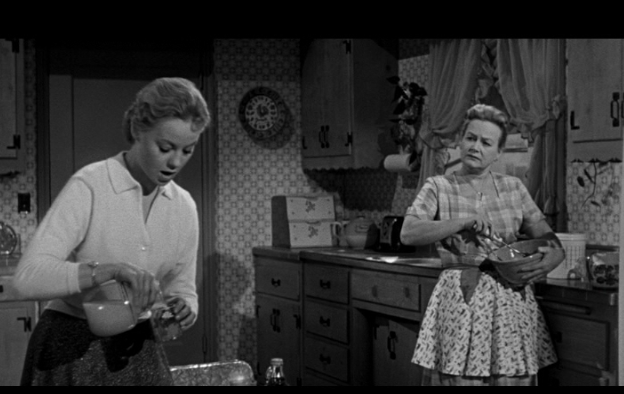 Early in the film, a scene of the sinister night-time life of the vampire, complete with coffin and full moon, is immediately followed by a homey one in the family kitchen. The contrasts sit side-by-side, complicating our reactions to the world it depicts. When her son’s pet is killed (off-screen), the mother immediately tries to stifle his emotional reaction, emphasizing positive thinking. Later, she judges a funeral as “depressing,” and no one seems to expect Rachel to mourn much for a friend who died in front of her. All of this adds to a sense of normal life as a little unhealthy, as does the minister’s statement that this death is “not for us to question, but to accept”: not a wise approach, considering she was murdered by a vampire.

While these unsettling threads weave through the background of the story, there are other suggestions that the world Rachel and her family take for granted may be passing away, sooner than they think. Despite his seeming to represent an Old World of artistic endeavors, cultured manners, and familiar supernatural imagery, this Dracula’s intentions are focused, like an American, on the future. He doesn’t seem to kill for sustenance, but to create of a kind of planned community of vampire subordinates, and his sales pitch to his victims includes the promise that they will outlive their “dying world.”

Paul Lederer, a veteran Czech actor, isn’t very imposing as Dracula; the role calls for magnetic charisma, and he’s a bit too passive and low-key. This might be partially the result of his dissatisfaction with a film he “hated.” In a 1993 interview on a program Skip E. Lowe Looks at Hollywood (link here), he says he took the job thinking it was going to be a comedic take on tired vampire tropes. He was unhappy when it ended up being “the same as everything else,” and is openly hostile to its eventual cult success. Eberhardt, too, is a little wooden, which doesn’t help the important connection between the characters feel as real as it might.

Nonetheless, the film has a can-do spirit, and some oddball charms. For fans of Landres’ The Vampire, there’s a cameo from a medical examiner named “Dr. Paul Beecher,” a different actor and obviously different character, but a nice little Easter egg. When one of Dracula’s victims is staked, the film briefly shows her blood spurting in full color, which must have been very effective in its original showings. And the presence of international vampire hunters who pose as immigration officials is an interesting way of aligning the obviously unreal in a more realistic context. 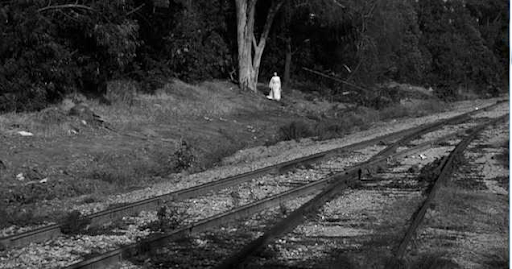 But the film’s raison d’etre is the juxtaposition of creepy supernaturalism with a contemporary setting, and the ideas that sparks about American life, something we’ll see more of in future films.
Posted by Anarchivist at 3:53 PM