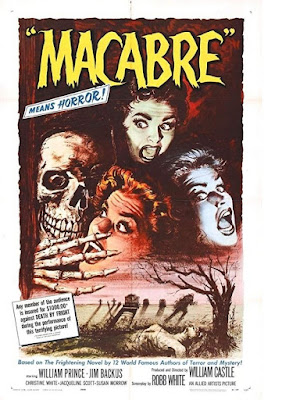 Released the same year as The Return of Dracula (1958), William Castle’s Macabre is the film that originally sparked my interest in the idea of small-town horrors, although in revisiting it, I can see that in some ways it takes a different approach, not quite fitting in. Apart from the opening, and some abrupt flashbacks, the film takes place at night, giving it a certain morbid atmosphere and a film noir feeling.

Castle was already an industry veteran when, inspired by an enthusiastic audience reaction to the thriller Diabolique, he entered the genre of low-budget horror where he would find his greatest success. This film also marked the beginning of his penchant for promotional PR gimmicks, with an insurance policy against death by fright, and the filmmaker arriving at theaters in a hearse. It also contains a dramatically ticking clock that counts down the hours to the film’s conclusion, and ends with a narrator who addresses the audience directly, asking them not to reveal the ending: “It will spoil the enjoyment of it.”

Despite this entertaining ballyhoo and the film’s importance in Castle’s career, Macabre has never received the attention of its more well-known counterparts. Other of the director’s famous thrillers have been commercially available on VHS, DVD, and Blu-Ray, and The House on Haunted Hill and 13 Ghosts received big-budget remakes in the ‘90s. The sole legitimate commercial release of Macabre, however, has been through the Warner Archives, on DVD-R, although it is now available on some streaming services as well.

The film is surprisingly low-key, which may explain why it’s not as fondly remembered as some of Castle’s other efforts. It’s more of a drama than a full-fledged horror film, although there is plenty of spooky ambiance in the cemetery scenes, and one jarring shock sequence.

As in Paul Landres’ The Vampire, the protagonist is a small-town doctor and single parent to a preteen girl. Dr. Barrett is an outsider who married a local girl, and stuck around after her early death. Now he’s juggling an elegant (but apparently not entirely public) fiancée with the girl-next-door nurse who’s practically a member of the family. His dishonesty with these women is fairly subtle: when the fiancée suggests he’s leading the nurse on, he says that including the other woman was his daughter’s idea, which the audience knows is a lie, although it would be easy not to catch that. 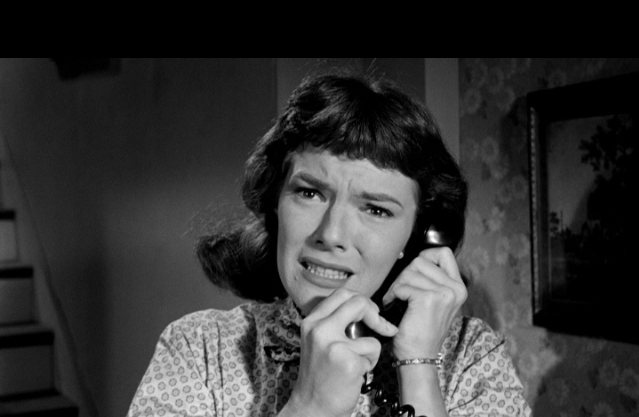 A set of briskly introduced but fully differentiated characters is brought in, including an excellent Jim Backus as the menacing sheriff, and before long, nurse Polly answers the phone, and learns that the doctor’s daughter has been buried alive.

The screenplay, by frequent Castle collaborator Robb White in his first film work, was based on the novel The Marble Forest, later reprinted as The Big Fear; while it changes some key plot points, the film stays true to the book’s general tone. Co-written by a group of mystery writers under the pseudonym Theo Durant, the novel was published in 1951 but set in 1948, and openly engages with some major themes of the genre, including these evocative descriptions of the setting:

“There was his own house again, placid, glimmering white among rain-drenched shrubs. There was the porch light, burning with a steady and commonplace glow that belied terror or tragedy” (p. 23). As the night wears on, with characters trying to find the buried child before it’s too late, “the sight of his white house gave him a sick feeling of despair. It looked … calm and cheerful with its shaded lights, so that the evening took on the quality of a nightmare in which one wanders hopelessly from one half-familiar scene to another, to another and back again; all of them a little wrong, growing hideous at least through sheer recurrence” (p. 114). 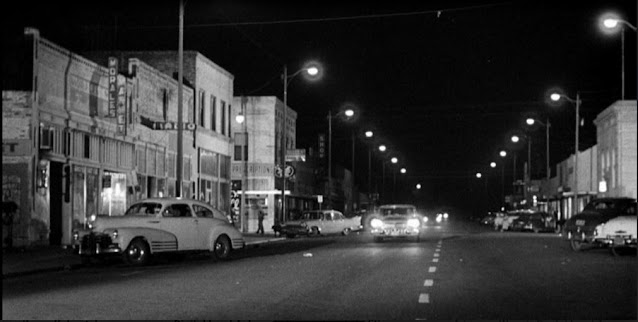 In a bleak vision of human nature, the sleepy small town is revealed as a place where the doctor can realistically assume someone hates him enough to bury his 3-year-old daughter. He considers his patients, “sane, decent people with sane, everyday ills. But one of those ordinary faces was a mask for hate, for a warped, pitiless mind,” counting “at least four good, right upright citizens near enough to that, full of hate, full of sadism, on the borderline” (p. 34, 43). Barrett has been unfairly blamed for some patient deaths, and for reporting another doctor for potential malpractice; interestingly, one of these grudges involves the suicide of a young woman who he refused to help with an illegal abortion.

A version of this speech and this subplot exist in the film, attaching it to Nancy, the little girl’s live-fast-die-young aunt, a blind woman who’d been having an affair with Backus, although she declares the baby’s father is a “person or persons unknown.”

Various personal dramas – unrequited love, unwanted pregnancy, conflicted loyalties and well-founded suspicions – all lead to the overgrown and atmospheric cemetery, full of dry ice and ancient mausoleums. Macabre seems in some ways less connected to the wholesome settings of Paul Landres’ vampire tales than it is to the contemporary Peyton Place (published in 1956), with the legacy of Sinclair Lewis’s Main Street hovering behind them. These works portray the small town as a quaint-looking hotbed of moral hypocrisy, filled with the festering, petty hostilities of people with constrained lives in close quarters. 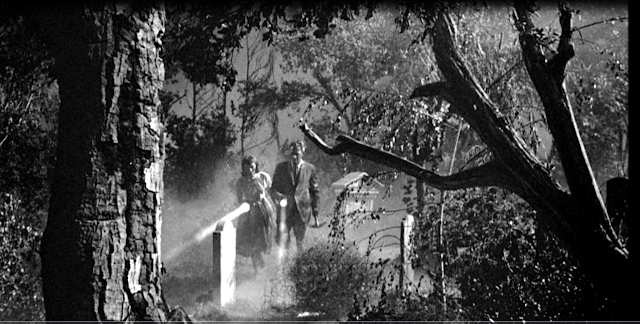 After several attempts to find the little girl before it’s too late, the main characters attend Nancy’s peculiar midnight funeral, in an extreme form of keeping up appearances. They go through the motions, covering up their trauma, afraid that if people knew what was going on, legalities might prevent them from digging up more graves.

In a major twist (changed from the novel), the kidnapping is revealed to be a hoax. The doctor has drugged and hidden his own daughter, using the situation to frighten his wealthy father-in-law to death. Macabre expands on The Vampire’s portrayal of a threat that originates with a respected member of the community. This time, there’s no Jekyll/Hyde formula to create sympathy for the villain. Instead, the respectable man is simply deceiving the people around him about his character and willing to commit murder for personal gain, which gives the conclusion a darker, more cynical quality. Just as Dr. Barrett is not what he seems, the small corpse they finally find in Nancy’s grave isn’t what it seems: a gruesome wax doll, rather than a dead daughter, which nonetheless provides the film’s biggest scare. 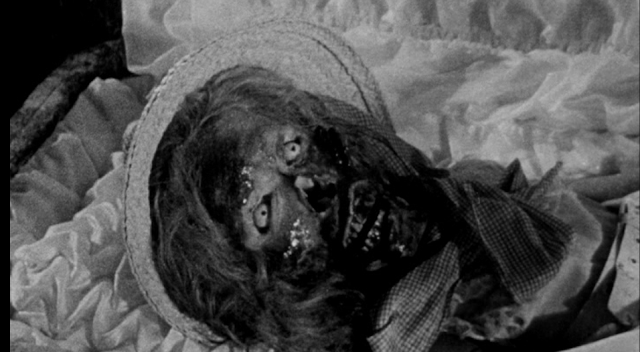 Sociologists like Stephanie Coontz, in her influential work The Way We Never Were, have argued that the 1950s was the time when the nostalgic view of a particular American culture, made up of complacent nuclear families in a prosperous middle-class, was invented. If that’s the case, then the depictions seen even in low-budget horror films were creating this image in front of their audiences’ eyes.

At the same time, in Rational Fears: American Horror in the 1950s, scholar Mark Jancovich reminds us that evidence shows “people were not so complacent in the 1950s as it is often suggested” (p. 22), often expressing “a deep-seated anxiety” with the conditions of contemporary life. That anxiety is often found lurking around the edges of the “normal life” that the 19050s media so often depicted, and the darkness underlying that normality is seen in a film like Macabre, where its clean-cut, close-knit community is a place, in the end, where no one seems entirely innocent.

Posted by Anarchivist at 4:12 PM