I Know What Various Kapoors Did Last Summer 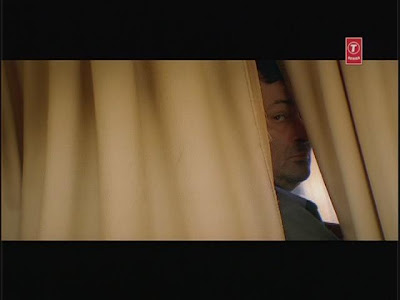 I have some friends who watch Hindi films as part of a well-rounded film diet, and they -- well, recommended is the wrong word, but keep in mind that they know my specialized tastes -- a slasher film they had seen. Eventually the title was tracked down, and imagine my delight when the concept turned out to be an I Know What You Did Last Summer in which the kids run over not a sinister fisherman, but a sinister Rishi Kapoor!

Then imagine my disappointment when I Netflixed it, only to find: no subtitles. But I forged on ahead, and watched the whole thing in one sitting.

When I saw the "Jeetendra presents" in the credits, I wondered which of the youngsters involved was his kid. (He also gets an overly-explanatory acting credit, where they point out that his part is brief on purpose). Turns out that Tusshar Kapoor, who I haven't had reason to research before, is his son. When I first saw him (as hero Karan), I immediately recognized him as that one guy from the "Deewangi" medley in Om Shanti Om. You can't tell I've watched that too many times, can you? In the film, he's in love with Esha Deol, the real-life daughter of Hema Malini, to whom Jeetendra was briefly engaged. That sounds like a romantic comedy plot waiting to happen.

But wait, there's more: producers Ekta and Shobha Kapoor are Jeetendra's daughter and wife, respectively. There's a nicely gossipy interview with Rishi about the film here, in which he says Ekta is like a daughter to him, but she runs a movie like a TV serial, which caused his role to become "rubbishy." (I also love the bit where he interrupts the interviewer to say "But let me tell you about all the films I haven't done.")

Overall, I think I followed the storyline pretty well. There's a group of college students, playing basketball and going to the prom, with only the quiet heartbreak of Natasha (the Anjali to her friend Tania's Tina) rendering anyone less than happy-go-lucky. Unfortunately, Tania is caught cheating on a test by Rishi's scary Professor Bakshi. I got the impression she was taking a fall for Karan (the designated Rahul), but can't say for sure. The gang decides to break into the Professor's house to steal something to help her, but what they find is a corpse in the basement, and when they flee in terror, they run him over.

Then he's not really dead, but then he is -- you know the drill. Tania leaves to put it all behind her, just like Jennifer Love Hewitt once did, and they all reunite years later at a wedding, where they're stalked by someone in a dark hood. Is it Rishi, back from the grave? 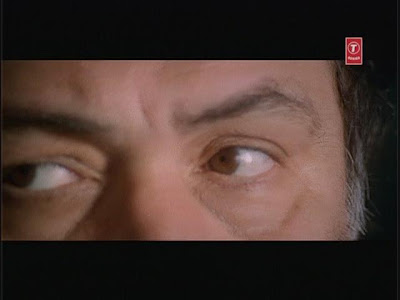 I was going to put in a shot of the stalker, since that's what's supposed to be scary, but frankly, it's just somebody in a generic hood. I couldn't resist a dramatic close-up of the great Rishi eyeballs instead.

Unfortunately, the eventual use of Rishi as red herring made no sense to me, since much seems to be revealed in a dramatic speech which I couldn't understand a word of. So maybe I now have a true Hindi-learning goal. Or just need to track down a copy with subtitles. The edition on Nehaflix is supposed to have them (from Video Sound as opposed to T Series), but they're out of stock. Some day!

Despite the part not being what he thought it would be, Rishi is great as a broody, intimidating guy. He's followed around by dramatic camera angles and music that sounds like it belongs in The Omen, and he even gets to do some amazing maniacal laughter. I want to see him play some kind of Shakespearean villain: I think he'd be great! 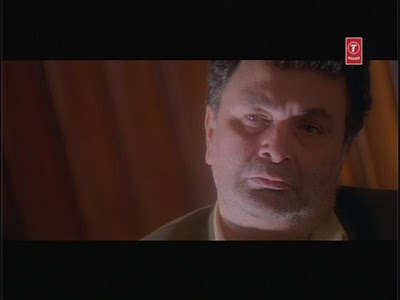 Someone on the IMDB says the film is like "an amateurish stage play," but I can't imagine they've seen Dhund: The Fog, the Ramsay Brothers version of the same basic story. This looked great in comparison, and the different elements (romantic college shenanigans; the mostly peppy, vaguely Main Hoon Na-like songs; Johnny Lever; and the suspense/slasher film conventions) were all integrated reasonably well. Maybe a pastiche of the lightweight American horror films of the '90s makes for a reach-not-exceeding-grasp situation. It's possible, too, that not hearing the dialogue might have improved it. Since I didn't know exactly what they were saying, I was much more sympathetic to the characters than I was in, for example,the American I Know What You Did Last Summer.

Speaking of Main Hoon Na, I was kind of surprised that Kucch To Hai came out a year earlier.

Director Anurag Basu, whose most recent film was the very different and critically acclaimed Life in a Metro, recently directed the upcoming Kites, which I suddenly really want to see. I think he and madman Rakesh Roshan were made for each other. The heroine of Kites is even named Natasha, same as a key player in the Kucch To Hai mystery! Coincidence? Or something more ... sinister?
Posted by Anarchivist at 8:09 AM

Rishi totally *would* be good as a villain. Age has given him a certain gravitas. He should play a godfather.

I would totally line up for that!

Rishi seems to chew on something when he isn't talking and your pictures verify that. By the way, I love the title of your post