When people talk about the clothes of the '80s, they're generally referring to the New Wave, or the Miami Vice, or the Madonna look: aggressive pastels, lime green, asymmetrical haircuts. But this is '80s fashion as I remember it: 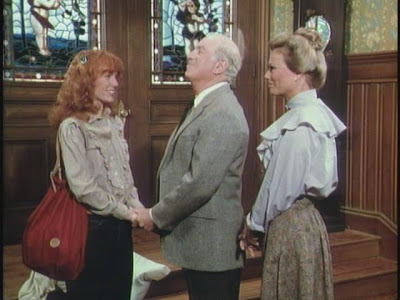 Oh my God, just look at those ruffles! In Falcon Crest's first season (originally airing 1981-1982), I think red-haired Vickie there wears a front-ruffled blouse like that in every episode. The businesswomen, exemplified by the show's matriarch, Jane Wyman, wear a disturbing array of polyester blouses with floppy bows and shoulder pads. No wonder my early entry to the workforce was so traumatic! 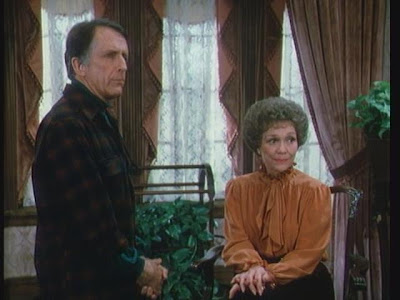 Here she is, flirting with Re-Animator's Fritz Weaver to make her ex-husband jealous! Whenever he talked about her coming to visit him in Vermont, we MST3K'ed something about a side trip to the Miskatonic University.

For those who weren't around in those days, the '80s were a time of big-budget nighttime soaps, with Dallas and Dynasty being the most popular and iconic. Falcon Crest, which focused on a family's dynastic conflicts in the California wine country, is the only one of them that I was ever a fan of, since it always counteracted its melodrama (and oh, was there melodrama!) with an air of slightly campy humor.

I never actually saw the show until its fifth season, but in season one, the characters are already established as the scheming old friends I remember. It's funny to think of me, a starving college student in a fairly literal sense, saving up for a four-pack of wine coolers, so I could open one a week to drink along with Falcon Crest on Friday nights. I knew so little about wine then, I don't think I really knew that vineyards and wineries were different things. I'm positive I didn't know that wineries had laboratories until I saw the one in the show. And I was not only completely removed from the lifestyles of the rich and famous, I had outright contempt for them. But there I was.

The premise is: after his father's death, New York City airline pilot Chase Gioberti convinces his writer wife Maggie and their two (mostly) grown kids to relocate to his childhood home to keep the family vineyard going, and re-connect with each other as they work toward a common goal. The move is partly motivated by the desire to take a step back from the fast-paced, fractured nature of then contemporary society, getting back to the land and the rhythms of nature, as well as embracing older family traditions. Almost immediately, the audience learns (as the characters eventually do), that a family and its traditions can be the source of even more problems than they had before.

Come to think of it, the numerous built-in, Reagan-era ironies may be one of the reasons I liked the show! Not least in the Gioberti family's primary nemesis, aunt Angela Channing (Wyman), who controls the profitable bulk of the family's holdings. She's a rather frail-looking older lady, who welcomes them graciously, talks a lot about the importance of family and higher values, and is played by the ex-wife of the then United States President. But behind this facade, Angela is a steely, cut-throat manipulator, who'll go to any lengths to secure her own interests, and doesn't care who she ruins in the process.

By the time we're midway through the first season, enough has happened that the Giobertis know she can't be trusted, although they still have no idea what she's up to or why.

Two things about the story-telling that I especially appreciate: the multi-generational relationships are nicely drawn. Father Chase's perpetual air of manly confidence makes his self-doubting son Cole feel like a loser in comparison. Mother Maggie (the moral compass of the show) is full of warmth, nurturing, and common sense, which only irritates teenage daughter Vickie, who's desperate to prove her independence -- even when she can barely leave the back yard without getting kidnapped.

The kids' lack of direction is surprisingly true to life for such a fluffy show: Cole wants to be an archeologist, but he thinks college would be a drag, and discovers that working his way up through part-time work on digs is mainly just back-breaking labor. Working at the vineyard gives him some sense of purpose without his having to really make any decisions about his life, which suits him. Vickie dreams of being a dancer, but to this point, the only time she actually takes classes, she skips them all the time to sneak off with an older boyfriend. So they both have vague ambitions, but aren't doing anything to make them happen, which, sadly, is what happens to most people's ambitions.

More amusing is the relationship between Angela and her heir-apparent grandson Lance (designated beefcake Lorenzo Lamas). She's trying so hard to groom him to become the kind of Machiavellian power player that she is, but really, he's just kind of a dopey spoiled rich boy. The sense of entitlement he got being raised to take her place some day actually gets in the way of his ability to do so. Although he spends most of his time being a high-living jerk, Lance is kind of a sad character, especially when he's attempting to flex his authority, and we see a poster in the background of his bedroom that says "A winner never quits and a quitter never wins."

The other aspect of the show that I appreciate is the specificity of it. Too often, fiction is set in relatively generic settings, with the idea that audiences can relate more to it that way. But if it's handled well, otherwise unfamiliar details can actually draw an audience in. In this case, I'm sure someone in the wine industry would find it all hopelessly inaccurate, but I love the industry-specific nature of so many plot lines. So far, various machinations have hinged on: the fact that grapes grown on one piece of land will vary in quality from those on another, because of the mineral content of the soil. Bribing and bullying migrant workers not to help rivals with their harvest. And my favorite: that the '81 zinfandel is too young to bottle! (That detail tipped people off to a fraudulent scheme to --gasp! -- put premium labels on ordinary table wine).

I don't know anything about how potassium levels will effect the wine, or the legal ramifications of mislabeling, but these things are all McGuffins. The important thing is that the characters are plotting against each other, and they're using the means at hand. So far, the writers are managing to keep the schemes interesting, and the whole wine industry as a fresh backdrop upon which character psychology can play out.

In other words, at least the early episodes have aged fairly well. Aagh! Sorry! Bad joke. But it's true. The ruffles and the floppy bows are hideous, and bring back post-traumatic fashion stress, but at least it's not the horrible Dynasty hair. I don't think that's something I could endure.

If you watch, I recommend you institute a drinking game in which you take an enormous slug every time someone says "Thank you, Chao-Li." I already wish I'd started counting. Chao-Li is the Chinese -- butler? I don't really know his job description, but he obviously pretty much runs everything at Falcon Crest, behind the scenes. Here he is helping Angela into her car to join a high-speed pursuit already in progress. See what I mean about the camp humor? 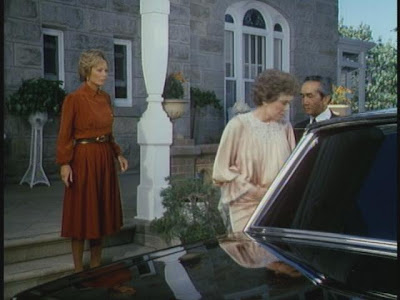 Angela clearly trusts him more than she trusts anybody in her own family, and I think he's keeping detailed files on everyone's misdoings on all sides, because he's clearly the sharpest person on the show.

Actor Chao-Li Chi, by the way, appeared in John Carpenter's Big Trouble in Little China, where he got to lecture Kurt Russell about magic and the fact that "China is here!" He also played real-life stage magician Chung Ling Soo in The Prestige. Of course, Chung Ling Soo was really Caucasian William Ellsworth Robinson in "Oriental" makeup, so his character being played by a real Chinese actor is an interesting twist.
Posted by Anarchivist at 8:04 AM

I've had a tab with this post up on my browser for a while and am going to acknowledge that I won't have time to write a fitting response. I never watched any of these shows in the 80's and your post has such a nuanced and sensitive analysis that I feel that you've distilled an awesome level of meaning out of the show! Thank you!

Thanks for the kind words! That may be a first: nuanced and sensitive analysis of Falcon Crest. It's odd that I find kitsch so inspiring, and not sure I dare analyze that too much. :)