A bit of conversation from the supernatural TV show Angel, as the characters prepared for a siege by demonic forces.

Gunn: What are you doing?
Wesley: Trying to imagine myself as John Wayne in Rio Bravo. You?
Gunn: Austin Stoker, Assault on Precinct 13.
Cordelia: If we live through this, trade in the DVD players and get a life.

Ouch! Cordy always had a sharp, tell-it-like-it-is attitude, but it usually wasn't directed at me.
There's a in-joke there I doubt I caught the first time around, in that John Carpenter has openly admitted his 1976 urban crime thriller was loosely inspired by Howard Hawks' classic Western, and Austin Stoker in fact played the John Wayne part. What's really funny, though, is the very idea that anyone twenty years from now will find inspiration in Ethan Hawke, or the 2005 Assault on Precinct 13 remake he starred in.
I know, I know: slagging substandard remakes of John Carpenter films isn't exactly a challenge. Nonetheless, analysis of why they go so horribly wrong might lead to some insights into the perennial question of What is Wrong with Hollywood?

Side note: by "Hollywood," a.k.a. the "mainstream media," I mean films that are made or distributed under the auspices of the major motion picture studios, with all that entails: generally large-ish budgets, biggish stars, and the guarantee that the films will play in all markets all over the country. We're not talking about anything arty, anything indie, anything with subtitles. Occasionally a TriStar will pick up something like the Afrikaans-language District 9 and get it into all the multiplexes, but that's not the kind of film I'm talking about.

Assault on Precinct 13 tells the story of a run-down urban police station on its last night of operation. First, a bus containing some prisoners (one of them a famous criminal) stops off there. Then they're all attacked by shadowy adversaries (gang members in the first, a criminal conspiracy in the second). The police and the prisoners end up working together to fend off their attackers, in an attempt to survive the night.

In the opening credits of the new Precinct 13, I was amused to note that one of the production companies involved is called Why Not Productions. I don't mean to pick on them in particular, because I have no idea what part they played, but that seems like a particularly apt phrase in connection with this picture.

The original movie had a strong, self-assured African-American man (Austin Stoker) as the hero cop, and a skinny, weaselly-looking white man as the master criminal. (No offense to Darwin Joston, who was excellent in the original role). So let's reverse them! Why not?

The original movie also had a cool-headed woman character (played by Laurie Zimmer, still beloved despite an otherwise almost non-existent career) who's easily an equal in strength and importance with the two male leads. Let's get rid of her altogether! We can bring in Maria Bello as a psychiatrist who trades sexual innuendo with Hawke, and then gets put into a sexy, low-cut dress for the siege itself. While we're at it, she can spend most of the movie panicking and hyperventilating. Why not?

In the original, the two sides were both rag-tag crews, armed with the weapons they were able to get ahold of. Let's keep the good guys that kind of makeshift bunch, but up against an enemy with a whole SWAT team's worth of advanced weaponry, including professional snipers and an armed police helicopter, so the contest isn't remotely evenly matched, and thus totally implausible. Why not?

The original was largely about the way individual acts of violence leads to more violence, until events spiral out of control. Because of this, the narrative contains two separate plot threads that together lead to the titular Assault: one is the murder of a civilian, a little girl who gets caught in the crossfire. So let's remove anyone from the entire film who isn't either a criminal or a cop -- in fact, any ordinary audience identification figure. Why not?

The other precipitating factor is that the police have killed some gang members in a raid. The gang's response is to kill one person for each of their own, so that that police are being targeted for the doings of other people they're identified with. Hey! There's that violence breeds violence/revenge theme again, along with the idea of unrelated individuals being blamed for the actions of a group. (We'll see that again in The Fog, coming up next). However, why do that when we can replace it with the tired old corrupt-cop conspiracy I remember from bad Bruce Willis movies. Why not?

(Offhand, I'm thinking of Striking Distance, which contained the full-on burnt-out alcoholic cop character, and the conspiracy within the force. Sorry for the spoilers, but you'd have guessed anyway).

Then there's poor Laurence Fishburne, who plays a major gang lord like he's still trapped in the Matrix, all deadpan all the time, and intoning portentously as if he's talking about the prophecy of the One. Why not?

Dude, I know have you have range! And this is not a role that calls for Morpheus; even a little Cowboy Curtis would have fit the bill.

There are people on the IMDB listing plot holes, and one of them got the awesome response "You are probably the most critical person I've come across." Just like with Cordelia there, I feel like they're breaking the wall and speaking directly to me! Because I can say that this shot was my favorite thing in the entire film. 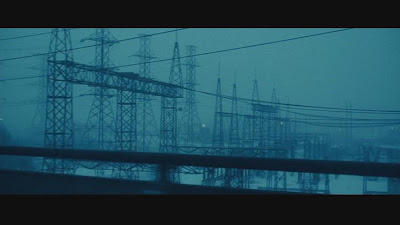 But speaking of those plot holes: there's much debate online about the tactics used by the corrupt cops -- why did they send the SWAT team in a few guys at a time, for one -- and some of the answers include the fact they didn't know how many people were in the building, or what weapons they had. This is even a plot point in the movie, where someone gets killed rather than tell the bad guys how many people are in the building.

Now, I'm no trained strategist, but I know this much: the good guys are cops, in a police station. The bad guys are other cops, who the good cops don't know are corrupt, even though they know some of them personally. The bad cops could have stopped in to invite Ethan Hawke to the bar after work! They could have seen exactly who was inside and what the sitch was before playing any of their cards. In fact, a whole slew of cops could have walked in the front door together wearing party hats. They could count heads, see that everybody was relaxed and off guard, and then blow everybody away. End of movie.

You should all be grateful that I've applied my potentially criminal mind to blogging about genre films.

In the original film, the previously untested police officers discover their heroism and bravery under pressure. The murderer who fights on their side rediscovers his nobility and his humanity. In the update, Ethan Hawke gets his groove back, and that's about it.

The oddest thing about these remakes is that they seem to be done by people who honestly have no idea what made the originals any good. These aren't Battlestar Galactica-style rebootings, where an old concept is drastically changed to some artistic and/or thematic end. Instead, it's a willy-nilly borrowing of titles and elements, jettisoning everything that made the originals classics in the first place -- the stuff that, without it, they wouldn't be remaking them in the first place.

Another thing: do filmmakers really believe that the audiences for violent, R-rated shoot-em-ups are so sensitive that they can't handle the kind of violence dished out in 1976, where innocent bystanders are shot down at point-blank range? I just re-watched the opening ten minutes of the original, and the scene where the gang leaders become blood brothers is more flinchworthy than anything in the remake, despite the extra explosions and bigger body count.

So far, those are two ways that Hollywood is going wrong: replacing ideas that relate to larger themes with generic scenarios, which seem randomly stuck in for no real purpose. And sanitizing the existing violence, so where it was once harsh, and thus potentially existed for a reason, it becomes all surface. Guns go off, people get shot, but none of it really registers -- none of it is really felt.

One more related post up, and then hopefully back to a good helping of frivolity.
Posted by Anarchivist at 6:00 PM