I Know What You Did Last Summer: Hollywood Lets Everyone Off the Hook

Spoilers for the book and the movie, so beware!

Hollywood is not a single entity. Individual works and filmmakers are sometimes willing to explore complexities and ambiguities, but in general, the mainstream movie industry tends to simplify issues, dodge hard ethical questions, and let its protagonists off the hood for lasting consequences and moral judgments. It’s safer to have a clear-cut sense of right and wrong, ultimately freeing film protagonists, especially, from meaningful moral judgment. A classic example of this phenomenon is the case of I Know What You Did Last Summer.

In Lois Duncan’s 1973 YA novel, a group of teens is threatened with exposure, and worse, a year after their part in a deadly hit-and-run accident. The novel’s potency comes from the fact that the protagonists are being punished for their real moral failings, relatable ones that invite us to question what we’d have done in the same situation. Even the most likeable characters, especially Everygirl Julie (played in the film by Jennifer Love Hewitt), are in the wrong, and have suffered no meaningful consequences for their actions, which motivates a grieving family member to take murderous vengeance.

The 1997 film adaptation ups the violence; none of the hit-and-run drivers actually die in the book, much less random characters in their periphery, whereas the film has a bloody body count. But while the film’s stakes are more extreme, it also lets its characters off the hook, morally speaking, softening their accountability and then removing it completely. Despite the film’s violence, the novel is darker by remaining more ambiguous. There are various points on which the novel is changed in order to soften the moral responsibility of the characters.

1. In Duncan's version, realistically, everyone’s drinking. The movie strains to show that this was a more innocent accident. Julie’s boyfriend Ray has remained a sober designated driver, and prevents their friend Barry from drinking under the influence. Barry, however, drops a liquor bottle on Ray, causing him to smell like alcohol. This is all more than a little convoluted. In the novel, all of the friends are buzzed, and fate, in the form of a coin toss, determines which of them drives. The “good” couple is happy to let Barry drive drunk, so they can make out in the backseat. Ray, who lost the coin flip, acknowledges that Barry “just happened to be the one who was driving” (50), and Barry points out to the moralizing Julie that “you were awfully anxious to get into the back seat tonight … You knew I was a little high. It didn’t bother you then” (51). 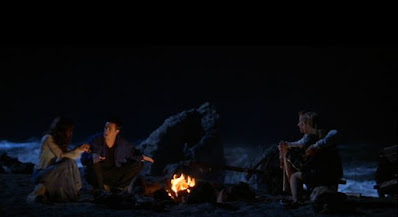 2. In the aftermath of the accident, no one in the book is shown suffering due to their actions. The retribution against them is partly fueled by the fact that none of them have faced any real negative consequences. Julie and Ray, the pair with more moral qualms, have broken up, and Julie’s gotten a little more serious about life, but Helen and Barry are still together, and everyone’s school and career goals are on track. The person threatening them, a family member of the person they hit, sees that “Our whole family is wrecked, and what about you four, the ones responsible? … All your lives are going along peaches and cream” (182). In the film, though, all of them have suffered indirect punishments. The romantic relationships have all fallen apart, career aspirations have failed, and Julie is a pale, guilt-ridden wreck of a person. In the book, she has some pangs of conscience, sending anonymous condolences, but that’s about it. They all felt bad about it, but time passed, there was nothing to be done, and they went on with their lives, which infuriates their grief-ridden persecutor.

3. Most significantly, in the novel, the accident really was a hit and run, not the result of someone stepping in front of their car. They hit a child, not a grown man. They do drive away, not stop and agonize about what to do. While they telephone for an ambulance, they don’t go back, leaving the child alone. The actions in the film are more extreme, since they toss the victim’s supposedly dead body in the ocean, and at the last minute realize he was still alive, so in this case, their actions would be real murder. Not surprisingly, though, he doesn’t die, and they are able to honestly say “We never killed anyone.” Then, of course, it turns out they hit a vicious murderer, who then goes around killing people unrelated to the incident, apparently just to mess with them. This places a focus on the sinister fisherman as much worse than they were, so that actually killing him would have meant other innocent people would still be alive.

In the book, however, it's clear that they did do something wrong, legally and morally, and were on the path to getting away with it, forgetting about it in time, and suffering no repercussions. It’s almost a fluke that they are held accountable in any way. Of course, Julie and her friends don’t deserve to die, but they shouldn’t experience no consequences, either. On the last page, Julie muses, “We can never erase it … What we did last summer is done. We can’t undo it, ever. But we can face it. That will be something” (198). And it’s a lot more than the film version can bring itself to do.

The film has its charms, like the post-Roseanne, pre-Big Bang Theory Johnny Galecki hilariously failing to be a tough guy. Hewitt’s line-reading of the on-the-nose dialogue “The secret is killing us” is so earnest it edges into its own kind of camp. And then ther's Freddie Prinze, Jr., who I thought was so bland in this, thanklessly playing the blandest character, little knowing some day he would voice my all-time favorite Jedi Knight, even overtaking Obi-Wan Kenobi in my heart, as Kanan Jarrus in the animated Star Wars: Rebels. There’s great scenery, too, which always makes me fleetingly want to move to the movie’s version of North Carolina, and it’s great to hear L7’s version of “This Ain’t the Summer of Love” on the soundtrack.

Overall, though, the changes to the story, and the softening of its whole thematic center, creates a lot of unnecessary plot complications. Like, they find out the fisherman’s name. He lives in the area, and had been in the news due to his daughter’s death. Don’t he and Ray both “work the boats” in the same small town? Does he have friends, or neighbors, or people who buy his fish? What do they think happened to him? Or do they think he’s dead? There’s an attempt here to graft the “unstoppable slasher killer” mystique on something too grounded in reality to make that work. His ability to move dead bodies in broad daylight, and at a workplace full of people  in the next room, brings it into the satiric territory of Behind the Mask: The Rise of Leslie Vernon, with its scenes of the killer planning how to pull off these impossible things.

Plus, for all the whole plot is motivated by the group’s fear of legal repercussions, there don’t seem to be any! The authorities don't even notice the killing spree going on the middle of the annual “Croaker Festival,” and in the end, they don't question Julie and Ray's half-truths about the events, allowing them to go on with their lives ... the same thing that motivated the novel's original threat!

Finally, I can't resist commenting on the problem this shares with much 1990s horror. Everyone’s too pretty. Pretty people are nice, but when everyone has a movie star sheen, it can add to that glossy, Hollywoodized feel, separating a story from relatability. It's particularly noticeable here with Helen’s frumpy sister Elsa, who in the book has a “heavy, doughish face” (79) and “plump shoulders” (158), and is shown as a complete contrast to TV personality Helen, who’s pretty enough to be “beauty queen material” (11). In the film, Elsa is played by Bridgette Wilson-Sampras, an actual beauty queen (1990’s Miss Teen USA). That kind of says it all on this subject! 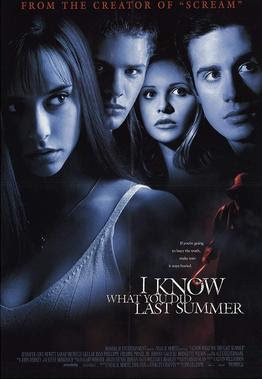 Posted by Anarchivist at 6:29 AM