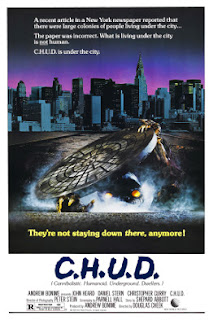 There are several movies that, if I hear them mentioned, I can't help bursting out with my affection for them. I just can't let it go unsaid. The Gamera movies are like that, Carnival of Souls is like that, and, probably most amusingly, C.H.U.D. is like that. Any hint of its existence and I am guaranteed to exclaim "I love C.H.U.D.!" And why not? It's true. I do love C.H.U.D.

My history with the film is sort of roundabout. Even though I'm the correct vintage, I never saw it back in 1984. I was pretty poor in the '80s, so I missed a lot of movies in the theater, and then I didn't have a TV for years. Filling in the gaps in my movie watching, I picked it up, more or less randomly, at some DVD sale in the early 2000s. On the bus, I read the poster blurb about how "They're not staying down there, anymore" and said, "I could write an essay about this as a Reagan-era artifact and I HAVEN'T EVEN SEEN IT YET!"  Luckily, it turned out to be a good Reagan-era artifact in the vein of They Live, with a distinct critique of the government and the socioeconomic status quo, so I can enjoy that aspect along with its crazy monster effects. 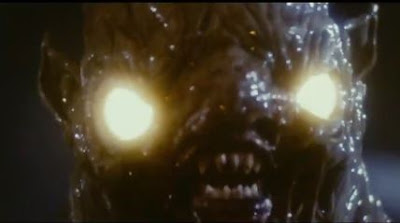 The film has a peculiar relationship to the sociological studies of underground homeless communities in New York City. One of the most famous was the book The Mole People: Life in the Tunnels Beneath New York, by Jennifer Toth, although its inaccuracies in geography and information about the actual subway system have led many to question its validity. In particular, see the detailed essay "Fantasy in The Mole People" by subway expert Joseph Brennan. Another well-known example is the documentary Dark Days, directed by Marc Singer, a photographer who befriended various homeless New Yorkers and was welcomed into their world, just like the photographer played by John Heard in C.H.U.D.

In the back of my mind, just based on the general knowledge, I vaguely assumed that C.H.U.D. had been inspired by some of these works. However, Toth's book came out in 1995, an expansion of reporting she did in 1990, and Singer's film wasn't released until 2000, based on material he gathered in the 1990s. Another photographer, Teun Voeten, did similar work in the early '90s, leading to a 2010 book called Tunnel People. Another documentary, Voices in the Tunnels, came out in 2008.

So C.H.U.D. predates all of these! 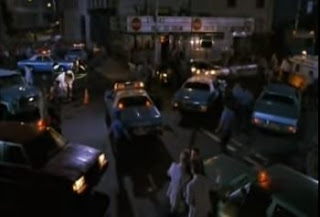 According to the American Film Institute's information, the screenplay was partly inspired by a New York Times article from November 29, 1977. Written by Dena Kleiman, the headline reads "Hobo Colony Lives Mole‐Like in an Inferno of Pipes Under Park Avenue." The article calls it "a shelter from the street that offers space, privacy and sanctuary from harassment by authorities," and that the residents "prefer their freedom and privacy to the world of regulations and limitations on their movement." This ties in with attitudes displayed by various C.H.U.D. characters, who are similarly in retreat from a society that treats them with disdain and disrespect. This theme is, of course, reinforced by the presence of Daniel Stern's street reverend, who runs a soup kitchen and only reluctantly deals with the authorities.

And they have good reasons not to trust those authorities, since while the homeless population is victimized by a society and an economy with no place for them, they are doubly harmed by the actions of greedy business interests, that dump toxic waste in the spaces they've retreated to. Financial greed and government corruption are directly complicit in what happens to the people underground, and responsible for those killed by the monsters they've been turned into. The only reason police officer Harry Bosch is trusted by anyone is because he actually lives in the neighborhood, and so has a personal stake in what's going on. 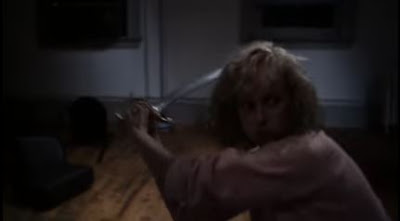 Making use of the problems of unhoused people for a monster movie can be seen, fairly, as inherently exploitative. At least this film is sympathetic to the counter-cultural Reverend and his regulars, even when they're unwashed or mentally ill, and that isn't something one always sees in mainstream media.

Similarly, while one might wish that Heard's character, so kind to elderly street people, would be less of a jerk to his partner (Brazil's Kim Greist),  she also comes off in a positive light. A fashion model who's joined him in moving to a gritty inner city apartment, she has doubts about NYC's suitability as a place to raise a child, but she doesn't come off as uptight, or a nag, or any of the stereotypes so ubiquitous in films of the era: just as a person with legitimate concerns. She expresses both vulnerability and strength, whether she's facing monstrous creatures coming up from her basement, or the concern that, despite their commitment, she and Heard might not be compatible. 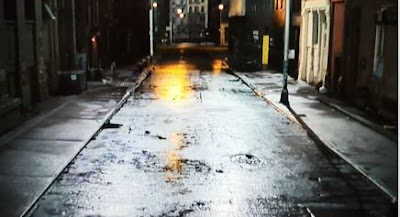 There's a lot of evocative nighttime alleyway photography, which in many ways is all I really want from a movie. This is aided by Martin Cooper and David Hughes' eerie synth score, which was mysteriously hard to find for a long time, but recently released by the good people at Waxwork Records.

C.H.U.D.'s always been a little under the radar; not forgotten, certainly, having a place in the '80s horror pantheon, but it's never gotten the attention of the slashers, or anything like The Lost Boys. That seems appropriate, somehow, for a movie that centers on a literal underground, and how the evils that befall a society's forgotten people will eventually bite everyone. Classic Reagan era!

Posted by Anarchivist at 7:53 AM