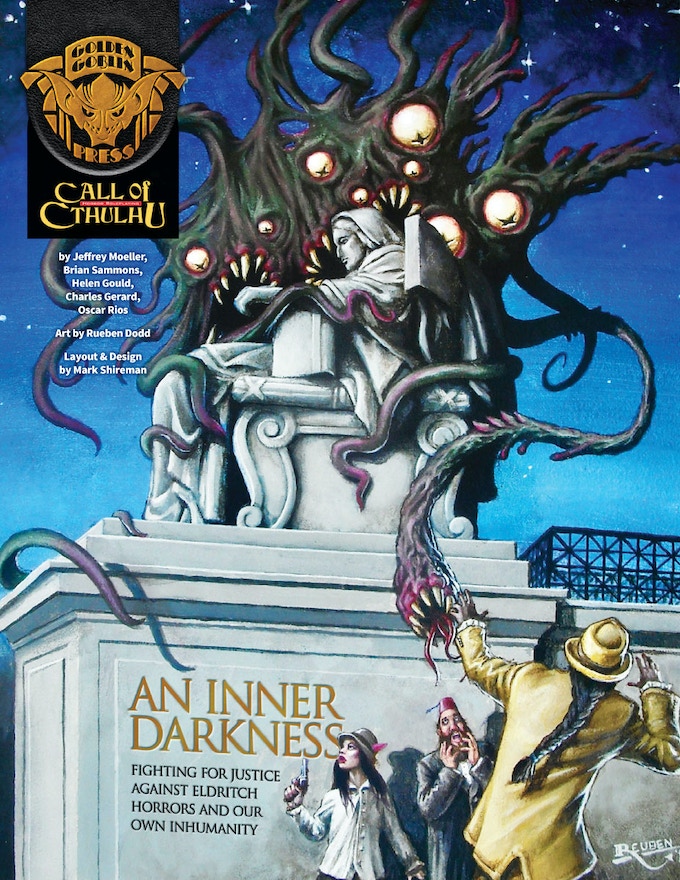 Today's word is going to throw me right into the present day. Recently, I backed the Kickstarter for An Inner Darkness, a series of Call of Cthulhu adventures by Golden Goblin Press, set in the 1920s and focused on social justice issues, so in other words made for me! I discovered them at the last NecronomiCon, where I saw their Heroes of Red Hook book. Somehow, I accidentally backed it at the level that included an online gaming session over Discord, led by Oscar Rios, the writer and publisher. When I started getting the emails about scheduling, I thought I'd gotten on the wrong email thread. Oops.

Despite some wacky technical difficulties on my end, what with my random combination of semi-Luddite technologies, I was set up as an "investigator" with a set of "sanity points" (and what a great and useful metaphor that is!) and explored supernatural evil with some complete strangers. In the end, after two sessions, I have to say I had fun. The Discord thing wasn't entirely intuitive, but without it, I'd never had tried it at all.

Even though I kind of wanted to back out, not having any idea what I was doing or how the gameplay worked, I decided to -- geez, I don't want to say something about my comfort zone, because cliche! But I'm glad I took the opportunity to engage with people I'd never have met otherwise, to get out of the abstraction of the interesting art and stories and thoughts behind gaming and actually take part, despite my sense of awkwardness.

Posted by Anarchivist at 7:23 AM