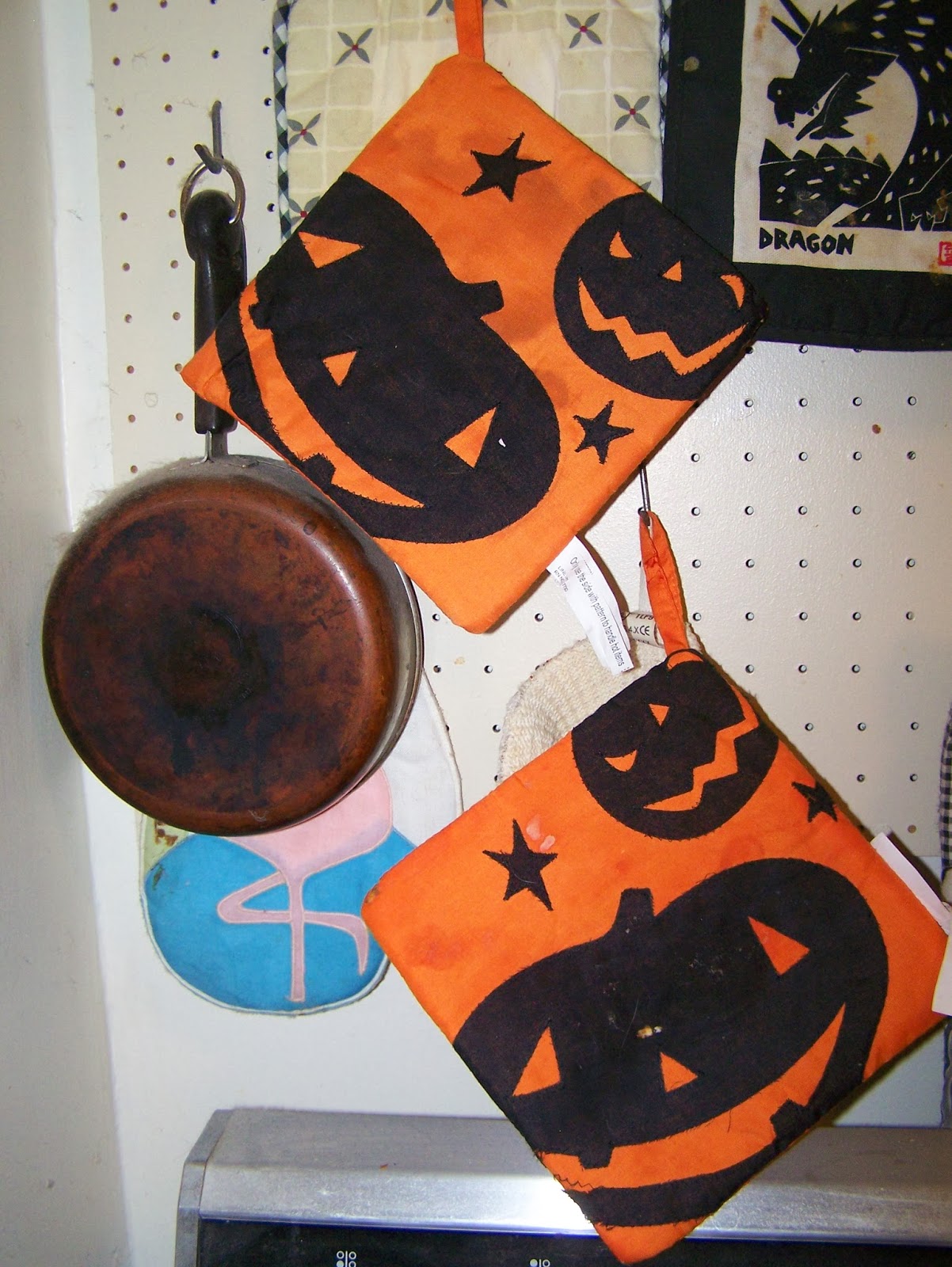 Learning to bake has been on my to-do list for ages -- as I discovered when I picked up some of that fancy cooking spray, with the flour in it, and discovered two other cans that had expired over two years ago. Oops! But with Halloween upon us, I was determined to use the occasion to bake a cake in my skull cake pan, along with the skull and jack-o-lantern cupcake pans I've picked up along the way. 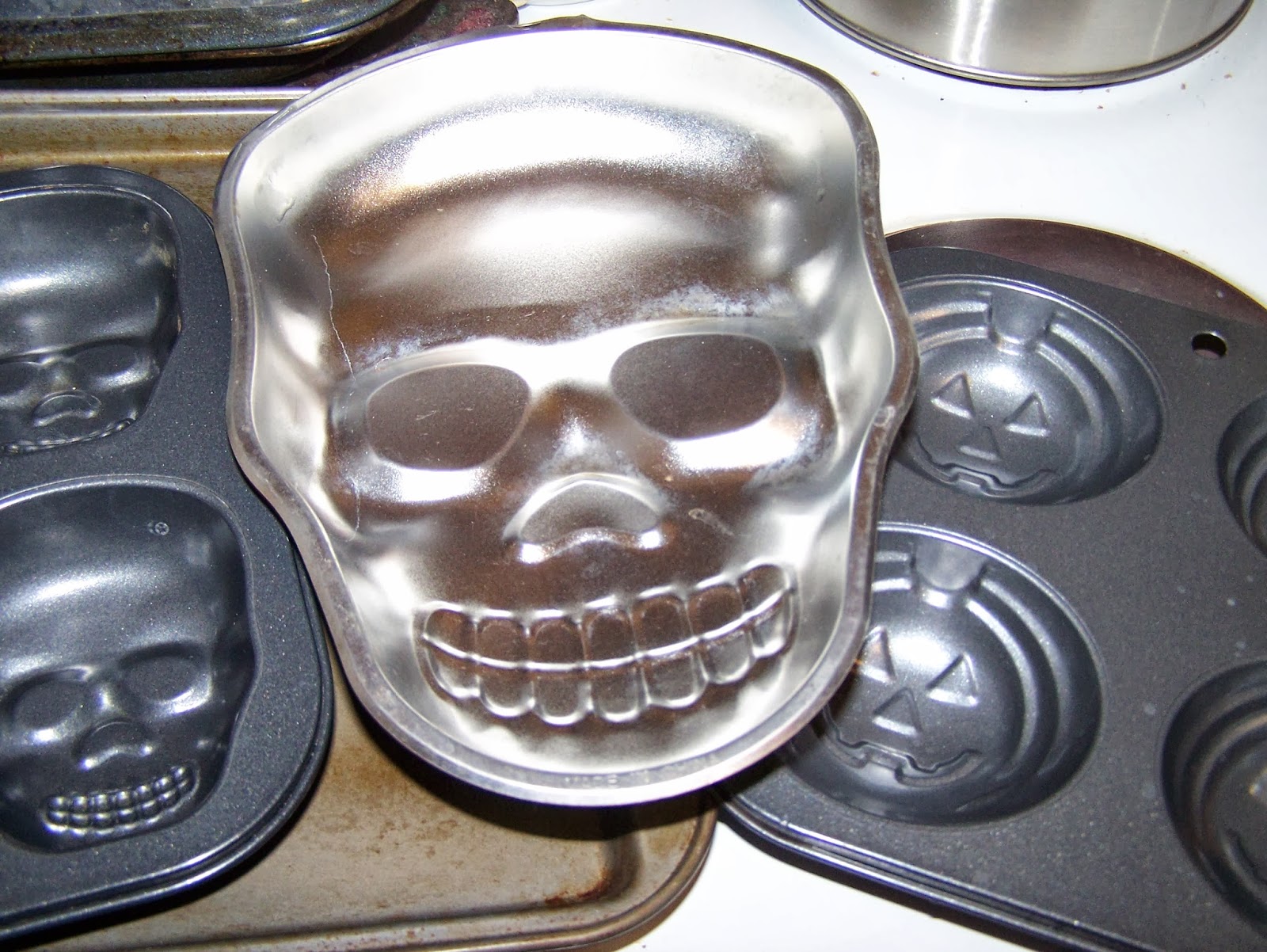 What I really need with baking (and cooking) at this point is familiarity. I've been looking for a book to help learn baking, and what I really want is something that starts with the rock-bottom basics, has you make something, and then slowly increases in complexity, building on skills used in things you've already made. The recipes need to use few ingredients, and appear simple and reassuring. There are lots of gorgeous and inspiring books out there, but they're all starting from too advanced of a place for me. Some of us are intimidated just by mixing the ingredients in a bowl! 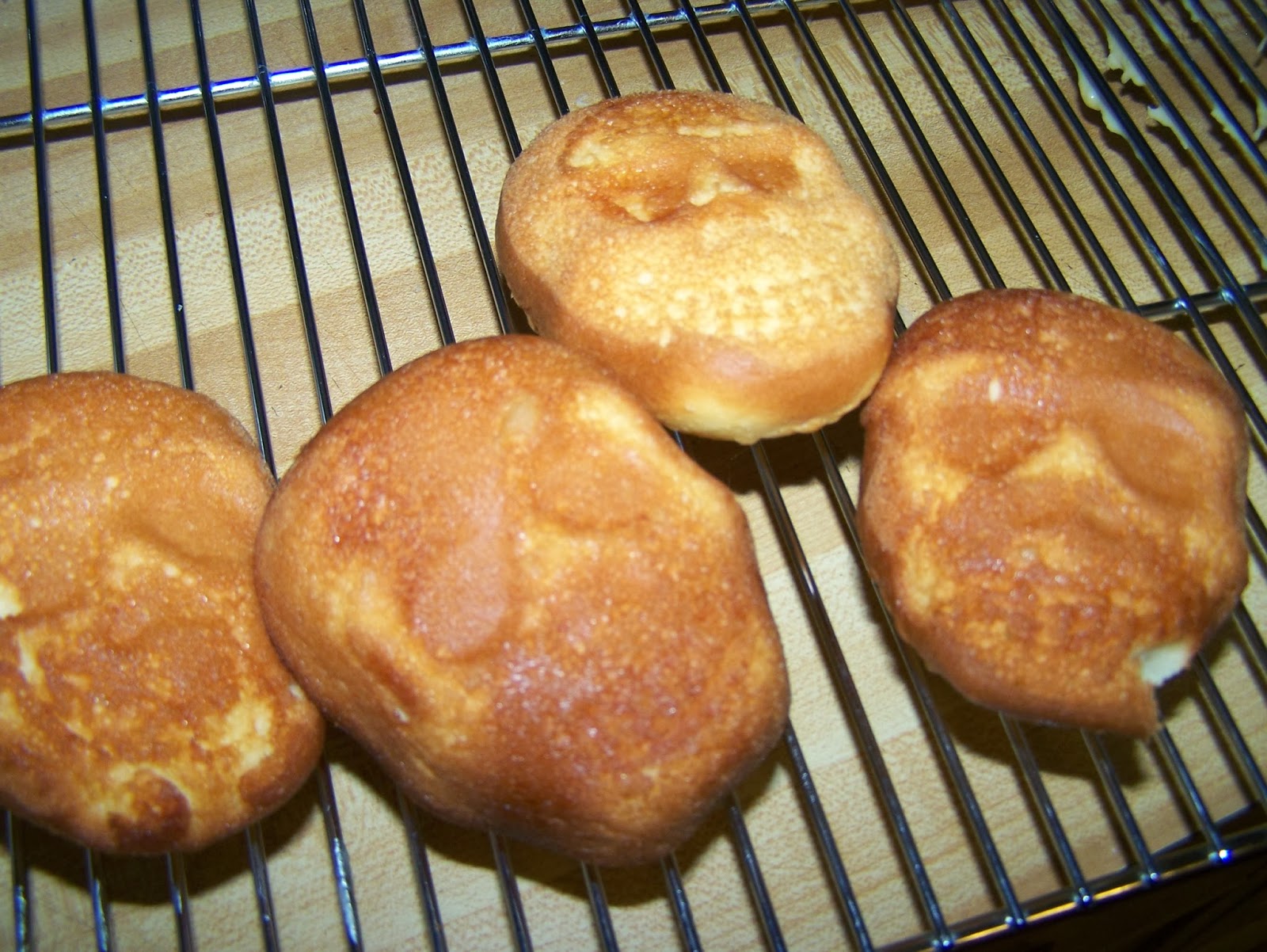 The mixer was actually where I thought it would be, and I considered it a good omen when I found its doo-hickeys(see, I just had to Google to find out they're called "beaters").

The cake mix in question was a Pillsbury Moist Supreme Premium Cake Mix in "Classic White." It was quite yellow, though,and came out looking nothing whatsoever like the cake on the box. I did use the whole egg recipe rather than the egg white recipe -- because please -- which might be the difference, but it does make me wonder what's different about yellow cake.

(The numbering scheme of the following steps has been done by me, in summary of the relevant box instructions).

1. Set your oven to 350 degrees. On my oven, I can push a button for a particular function, set a temperature, and then it'll beep when it pre-heats to the temp. Fortunately, one of these functions is "Bake," so I knew to pick that instead of, say, "Broil." If I were cooking something, I might have some problems just turning on the oven, although I think I just always use "Bake," because what, the heat knows the difference? In any case, the oven pre-heated to 350 degrees before I even got blending. Does it make any difference? It seems to me, based on communal Christmas cookie baking, that the longer the oven is on, the hotter it gets, and thus, the less time you need to bake later batches. Will that be relevant? I have no idea.

2. Either use shortening and flour (Good lord! Is this the 1930s?) or "lightly coat" with no-stick cooking spray. As stated, I bought the fancy baking spray, so I used that. It came out in an uncontrollable futz of white spray, so I don't know about "lightly coating" anything. Also, the box said to use liners for cupcakes. That would normally make sense, even to me, but I was using special molded cupcake pans, that are supposed to be "non-stick."

3. Add ingredients. Fortunately, I'm an overachiever with the liquid measurements. AND I can crack an egg with one hand. 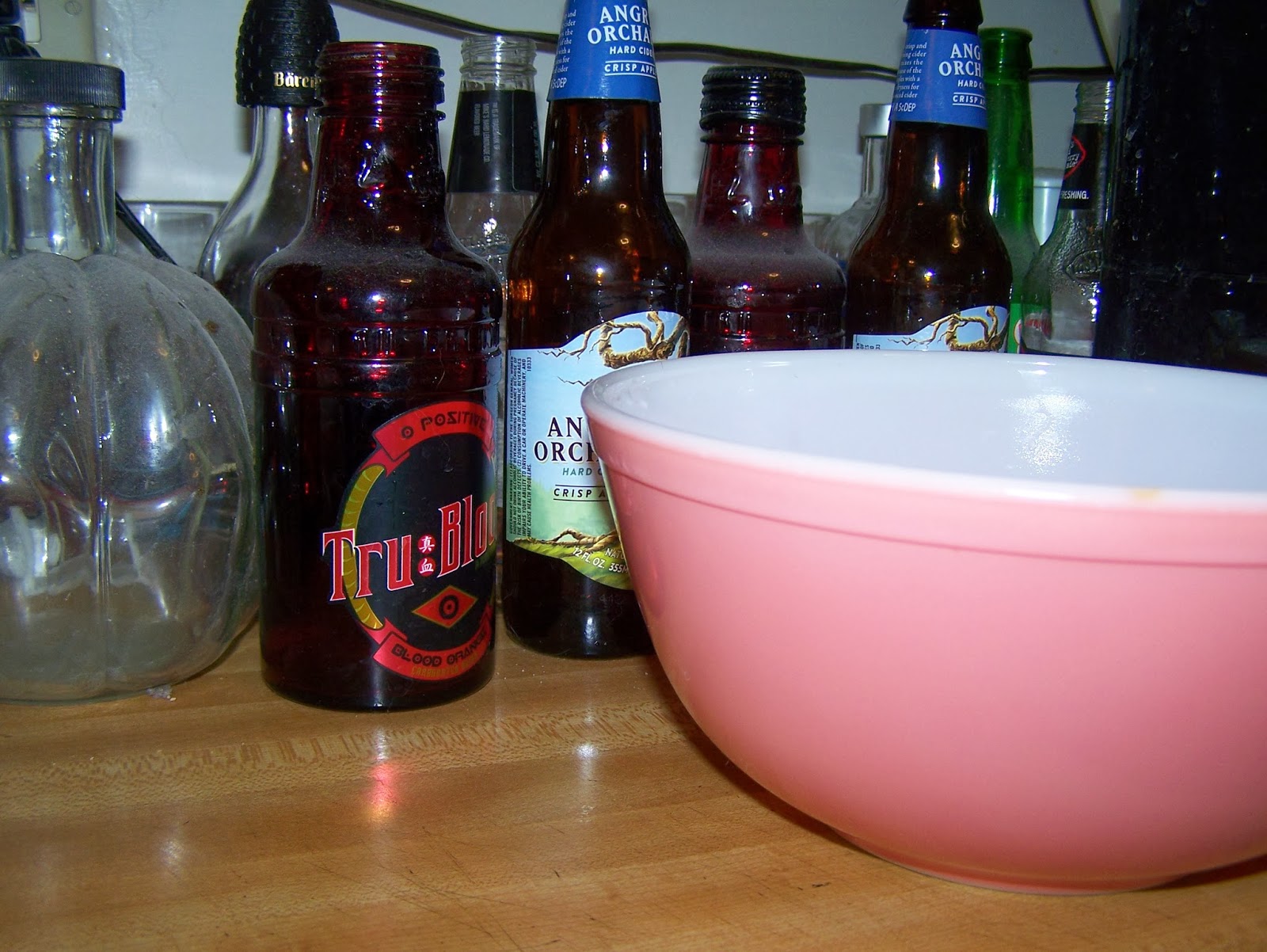 By the way, I totally Single White Female-ed this Pyrex bowl from a friend: I saw hers and went straight to eBay. But who can blame me?

4. Blend ingredients until moistened. It took me a second to realize that meant separately from using the mixer, and blending is not the same as beating.

5. Beat with a mixer on medium speed for 2 minutes. My mixer has 4 numerical settings, so I assumed that 2 was "medium." That seems to have worked, since the result was something recognizable as cake batter.

I had some real concerns about whether the hand mixer was going to fling batter all over my kitchen, but it did not, even when I pulled the beaters out slightly to spin the batter off them. Fortunately, I have a vague memory of my mom doing that, so I didn't just stop mixing and leave them heavy with goop.

5a. They missed a step here, which is the part where you get the batter into the pans. Okay, yes, this is as rudimentary as it gets, but that's what I'm looking for!  I spooned into the cupcake pans, and poured into the bigger pan. The main thing I didn't really know was how much batter this was going to produce. The box said it made "24 cupcakes," but that wasn't helpful. Turns out, there was exactly enough batter for each of my pieces: one skull cake, 4 skull cupcakes, and 4 pumpkins. Kind of spooky. 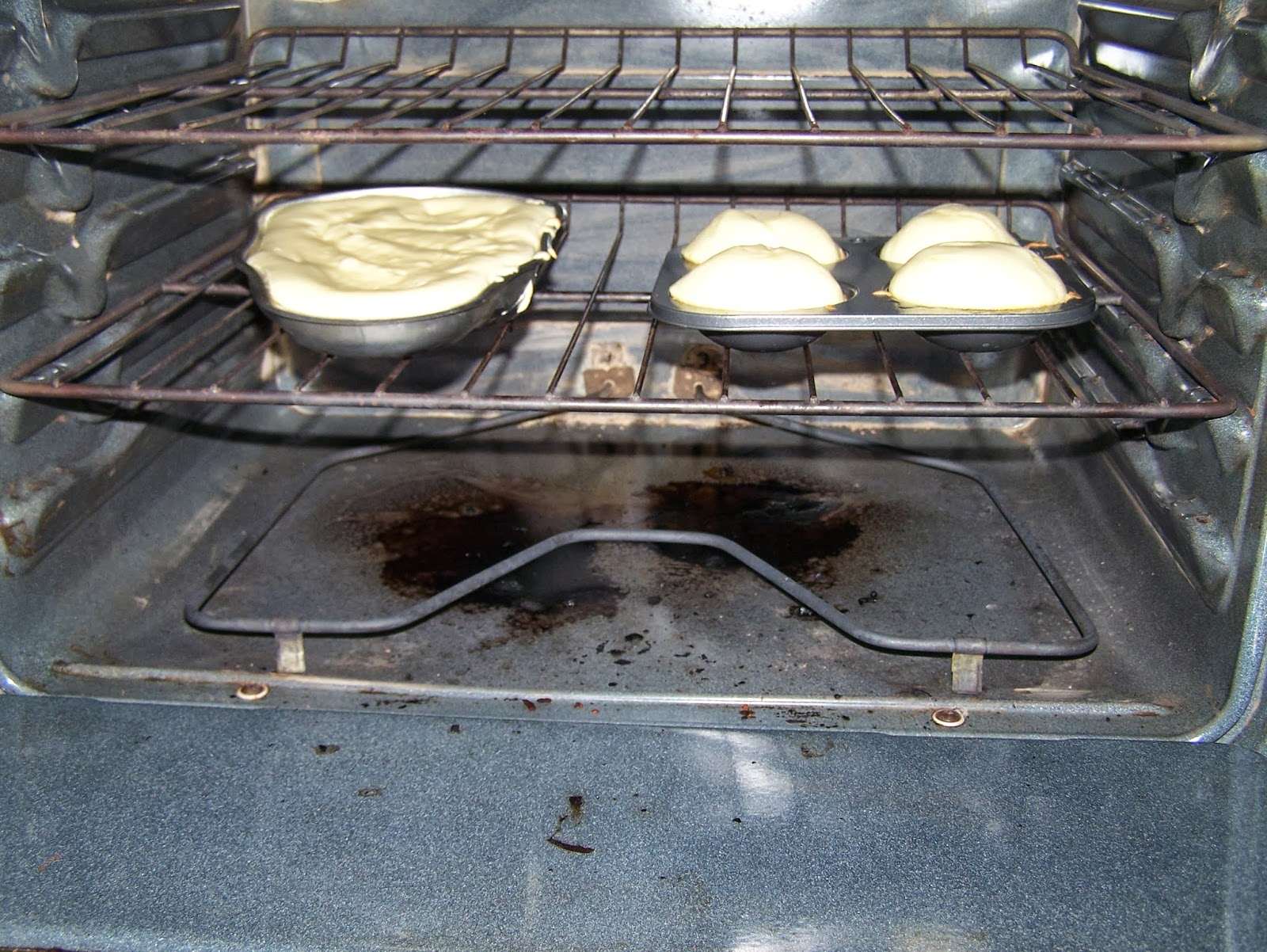 Here's where it gets tricky. Different bake times are given for 5 different cakish scenarios: One 13x9 inch pan; two 8-inch round pans; two 9-inch round pans; a Bundt pan; and 24 cupcakes (2/3rds full).

First of all: if you fill the cupcakes 2/34rds full, I imagine it's because it's going to rise. Does that mean a cake will rise also? With the cake pans, they don't say anything about how high to fill them. But it  seems that if cupcakes shouldn't be filled to the top, neither should cake pans.

My second confusion was about the relationship between the amount of cake in the oven at one time, as related to the bake time given. Maybe it's not even relevant, but who knows? Even a microwave will say to use more time if you're zapping two frozen enchiladas instead of one.

In my case, I had two pans with 4 cupcakes each, and a single cake pan, of unclear dimensions. We'll get to that troublesome skull in a minute; for now, I just don't know, even if I guess that cake pan is the equivalent of 8 inches, would I bake it at the time given for two 8-inch pans? How about if I want to put in the cake and one cupcake pan at the same time? (Which I did).

Questions like these are exactly why Betty Crocker was created in the first place!

I picked up some recycled aluminum cake pans for future reference, but when I got them home, I discovered they are 8 - 3/4ths round pans. So ... is that the bake time for 8 inches, or 9 inches?

In the meantime, despite not knowing enough to guesstimate, I totally did. With mixed results. I had the cupcakes in for a good 5+ minutes less than the suggested time, and they certainly didn't need any more. 7. Cake is done when a toothpick comes out clean. 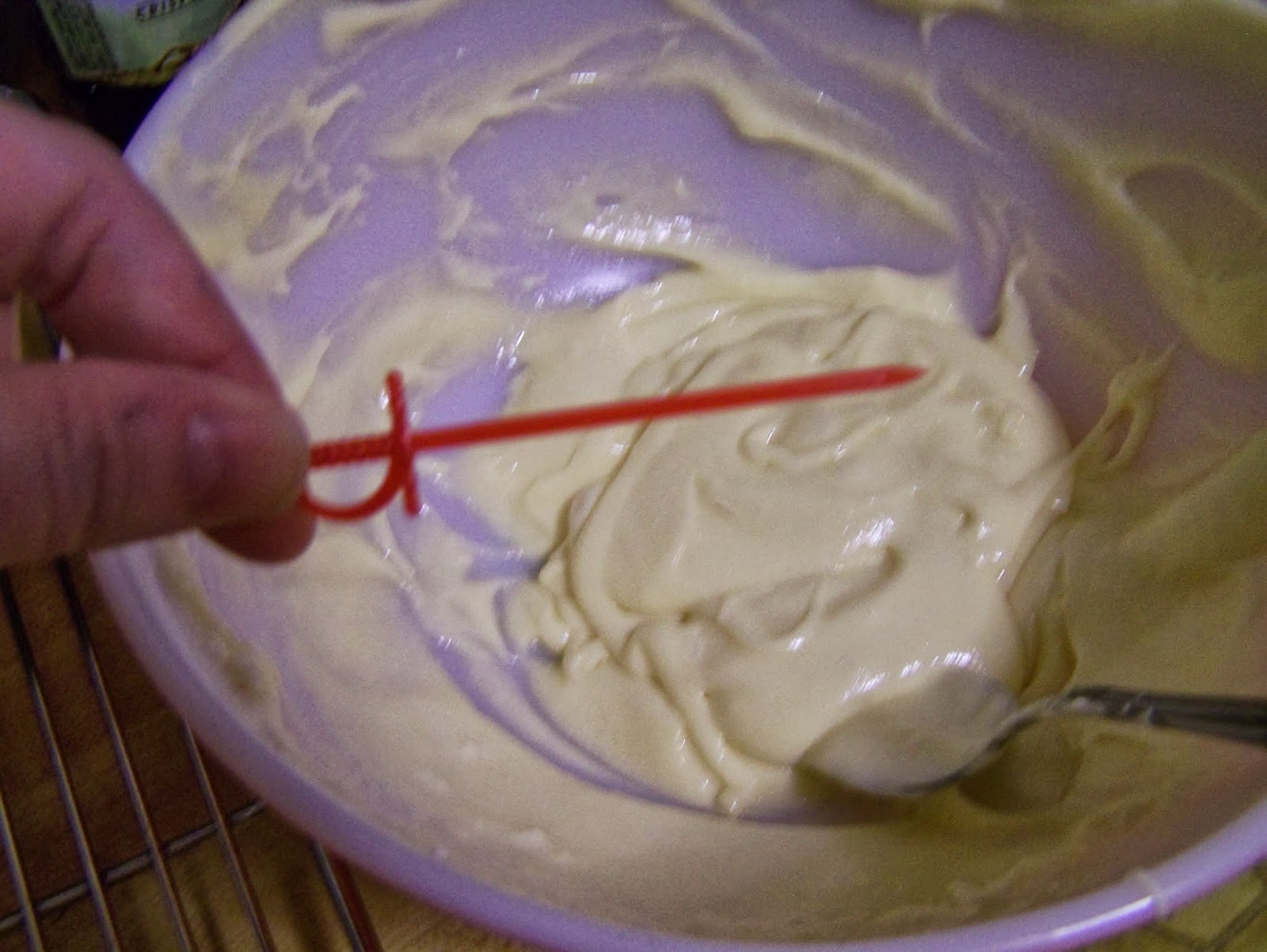 Here's where we really had a problem, based on my wild guessing about proper times. To be fair, my skull cake pan is made of very thin metal and quite shallow, and it's neither a symmetrical shape, nor a consistent depth. So I definitely made this harder than it had to be. However, I did in fact skewer the cake, in different areas, and it came out clean.

So it had been cooling on the cookie rack for quite a while when I decided to turn 'er over and see how well the skull pattern had turned out. When, uh ... complete disaster! Although it was nice and golden baked around the edges, it was still soft and pudding-y in the middle. What a mess! 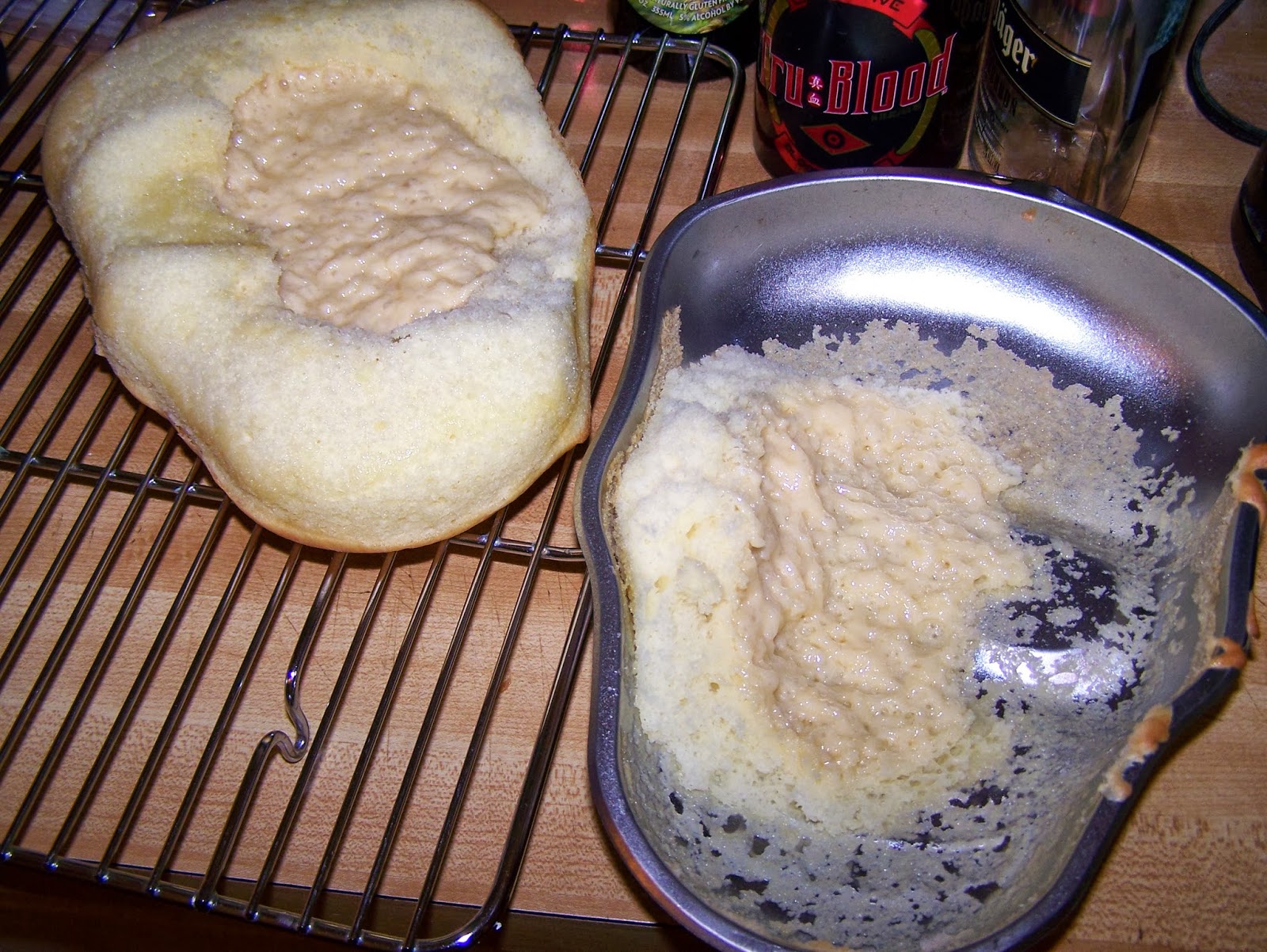 I announced that 8 cupcakes may be all we were going to get, but my honey helped me plop the whole mess onto a piece of aluminum foil, on a cookie sheet. We baked it for another ten minutes. What came out was more or less like a bread bowl cake. Hey, maybe that's a thing that should exist! Since it was yellowish, it looked very like it had some kind of cheesy stuff in the middle. So we ate it right out of there, fondue-style. 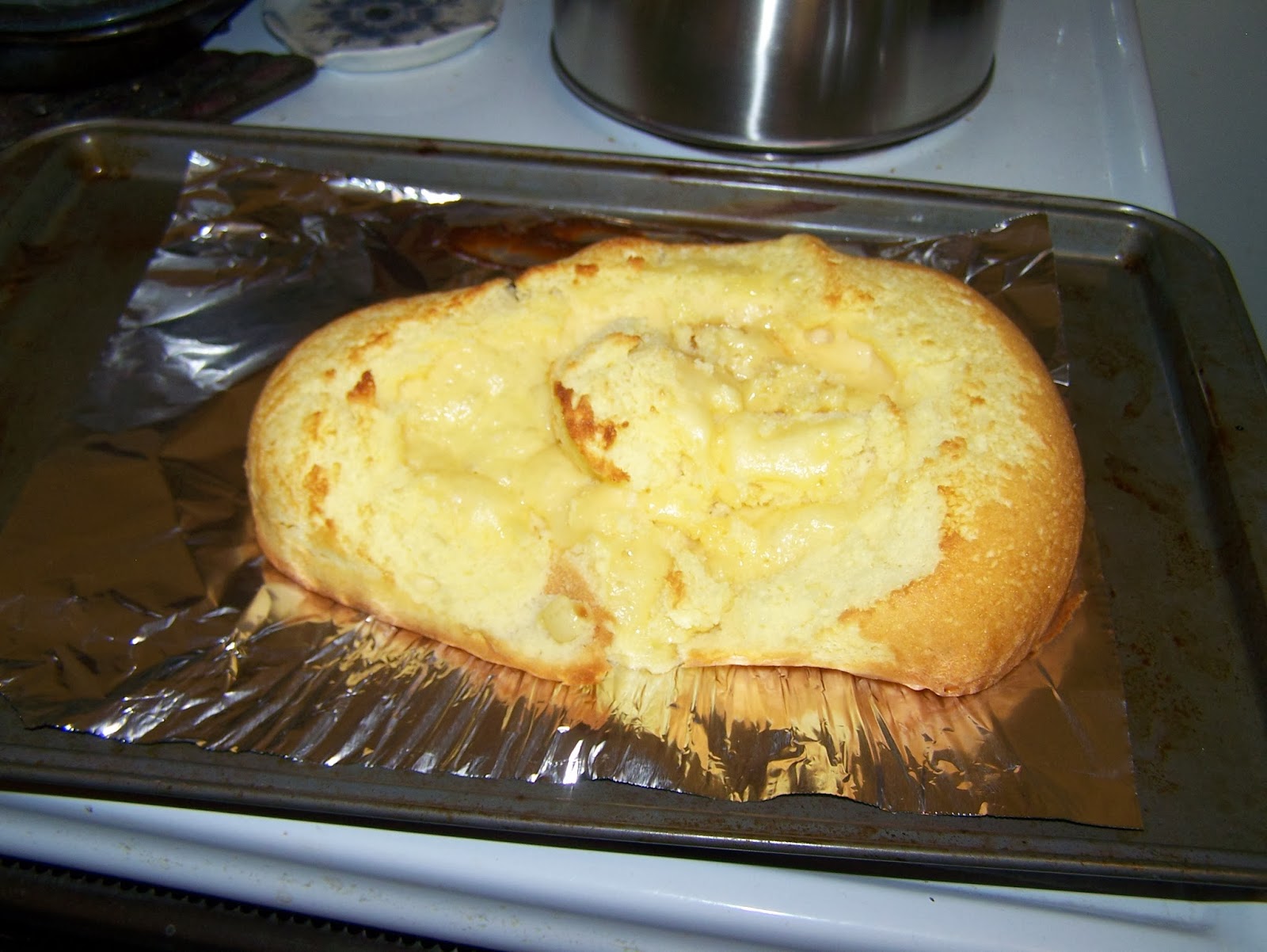 8. Clean up! The smartest thing I did was start putting dishes in the sink immediately. I put the egg shells in the measuring cup while I was blending. When I got to beating, I tossed them, and had the measuring cup handy to stash the sticky beaters in while I was pouring and putting in the oven. Once that was done, I squirted in some dish soap and let them soak, so the batter didn't dry on. Then, as soon as my second batch of cupcakes went in the oven, I immediately started soaking the mixing bowl. By the time those cupcakes were done, the first set of cupcakes were cool enough to remove from the pan, and I washed that along with the bowl, the measuring cup, the beaters, etc. 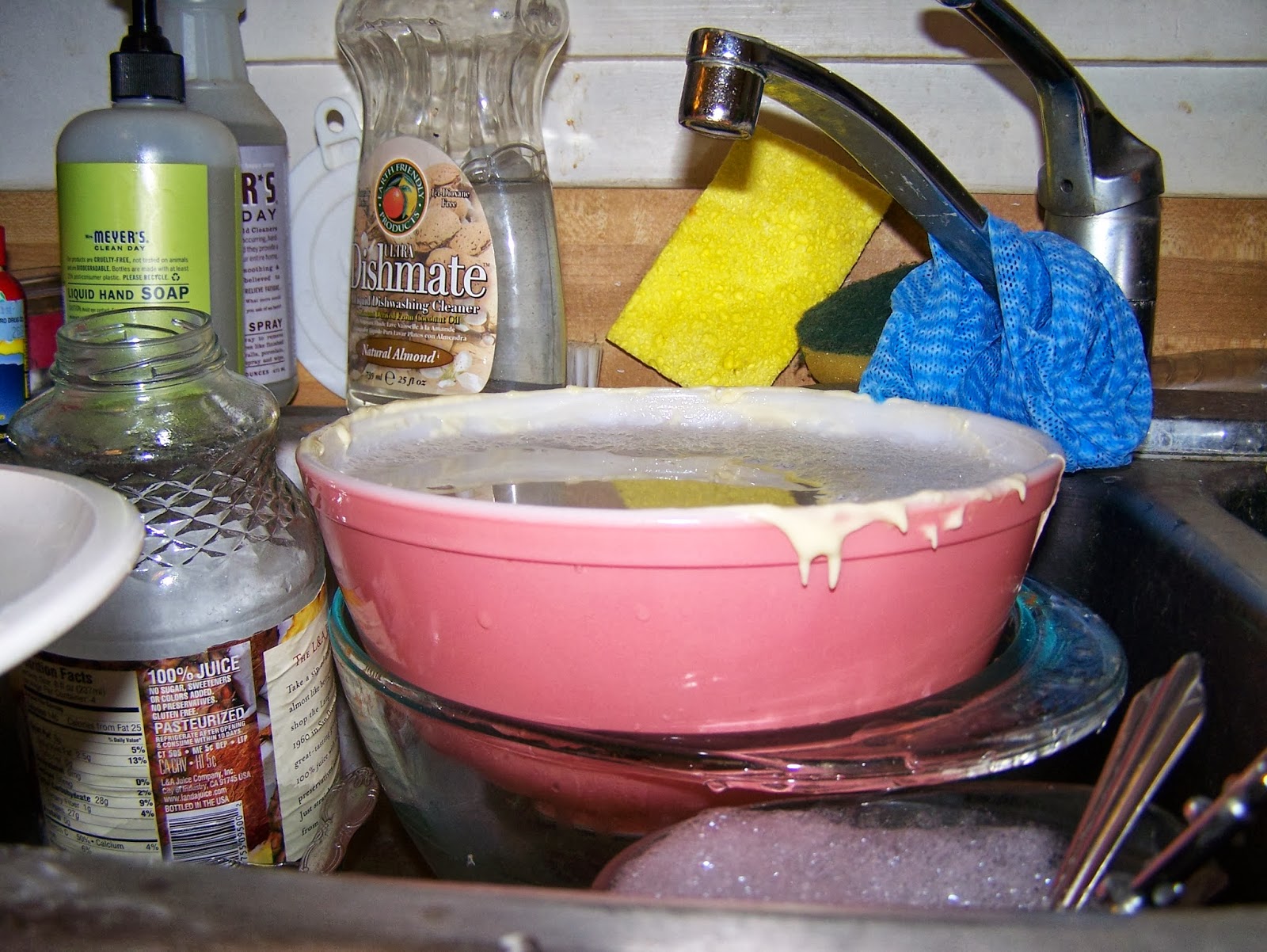 The verdict? Doable! Next time I'll try to use more normal cake pans and see if that makes a difference. Also, this mix was ironically a little sweet for my taste, so we'll have to see if I can darken it down in the future.
Posted by Anarchivist at 6:35 PM

You want to use a wooden toothpick to check for done-ness. I think the undone cake batter doesn't stick to the plastic toothpick as well.

You always want to set the oven to bake, unless you are specifically broiling something. To broil, you put the stuff on a broiler pan* close to the top of the oven and leave the door open a crack. Only the top element of the oven is used; it gets very hot and it basically blasts it with heat. For instance, you could broil a steak. Or garlic cheese bread. The cheese will melt on top without drying out the toast.
Anything you broil will only be in the oven for a few minutes (like three to eight minutes total).
On the other hand, when you are baking, the whole oven gets warm and the air cooks the stuff.

*Why a broiler pan? It is more heavy duty and will not warp in the heat. Also, the double layer with the holes means that fat will drip down to the bottom.

Here's a video about broiling:
http://www.youtube.com/watch?v=rSHPkVZ0sFA
It's pretty good, but they talk about not using glass pans to broil and then they put a glass casserole dish in to brown the top of the casserole.

I will buy some wooden toothpicks. I'd thought we had some, but couldn't find any. Ummm. And that's after supposedly "cleaning out" the pantry.

Also, the fact that I always use "Bake" now makes me feel very savvy!