Halloween in a Suburb: WandaVision

The 2021 Halloween episode of Marvel's WandaVision aired in February, which will probably lead to it being neglected in this season's viewings. It doesn't help that it takes place in the middle of a heavily serialized storyline, so it can't function well as a stand-alone one to watch for Halloween. Nonetheless, its ambience is fantastic; up there, in my opinion, with Trick 'r Treat and the opening shot of H20: Halloween Twenty Years Later.

For those who haven't watched WandaVision, its format is that each episode mimics the style of TV sitcoms from a particular time, from The Dick Van Dyke Show era to that of Modern Family. These recreations are meticulous, not just in the wardrobe and set decoration, but also the lighting, camera angles -- everything. This episode, "All-New Halloween Spooktacular!," clearly evokes Malcolm in the Middle as its primary influence, and that chaotic energy is perfect for Halloween, with shaving cream pranks and smashed pumpkins, courtesy of Wanda's visiting brother, dubbed "a man-child" by the precocious Malcolm-like narrator. Wanda and Vision dress in kitschy costume versions of their original outfits from the comics, and a whole panorama of neighborhood kids trick or treat in broad daylight. 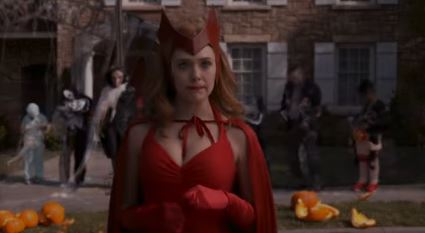 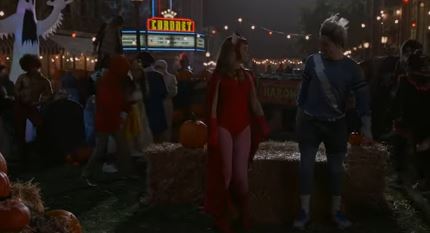 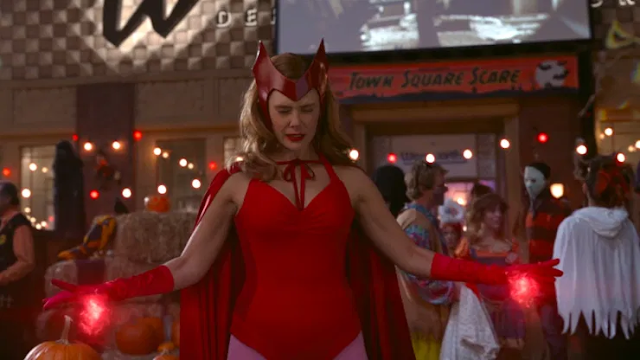 But true to the spirit of the season, under the colorful paper decorations, cartoony blow-molds, and kid-friendly atmosphere, it's really about darkness, loss, and death. Pressed on the alternate reality she seems to have created, Wanda describes the origin pretty bleakly: "I only remember feeling completely alone. Empty. Just -- endless nothingness."
Away from his family, Vision experiences a different kind of ambience: the darkness on the edge of town. His scenes are truly eerie, as he moves from scenes of frolic and fun to ones where people seem trapped in a kind of purgatory, against a background of night darkening over increasingly more isolated suburban homes. 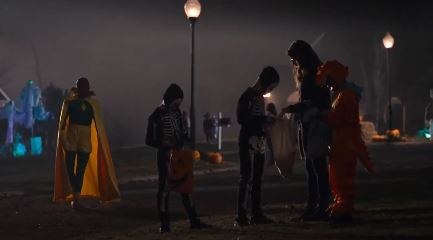 The houses are lit up with decorations, but that only highlights the darkness and emptiness of the world. 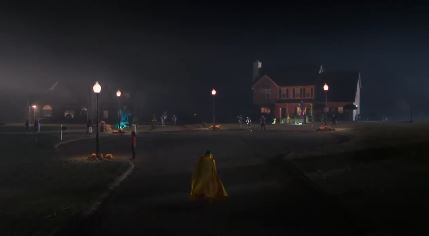 The entire sequence of Vision walking alone through Westview, to the empty fields near the city limits, is gorgeously unsettling, backed by an equally eerie piece of soundtrack music aptly titled "Dead or Alive." The orange plastic gives way to the uncanny, right in the middle of what's so often thought of the safest of places. A whole spectrum of what Halloween contains.

Posted by Anarchivist at 6:34 AM