Back to School Horrors: Rush Week

In Rush Week (1989) a transfer journalism student investigates the disappearance of a young woman at a mostly sedate college, at the same time a rowdy fraternity house is reopening, which may or may not be connected. The film begins with a nighttime vista of the empty campus, set to creepy background music, showcasing a sense of emptiness and isolation, before shifting to a frat party full of (mostly drunken and immature) camaraderie.

Coincidentally, I just read the book The Great Good Place, with its discussions about place, and the increasing difficulty of creating community in modern spaces, so much so that people are losing “the habit of association” (73), and I noticed it was originally published in 1989, the same year as Rush Week came out. The campus isolation contrasts with one of the main reasons why people join fraternities and sororities: to make friendships and/or connections. Even if it’s for future professional reasons, there’s an assumption that personal ties will help with that.

Unlike Monster on the Campus, the emphasis in this film is solidly on the students. The adults are unhelpful, exploitative, or downright sinister. Like Dr. Blake in Monster on the Campus, this college’s Dean Grail is concerned with civilization and the danger of regression: “Fraternities, sororities tend to accentuate the very worst, the most degrading influences.” He wants to guide the students instead toward “productive futures,” but this is clearly part of his mental instability. An attitude of “don’t trust anyone over 30” is ingrained even in young people who, certain Animal House-style shenanigans notwithstanding, dress like yuppies and are far removed from the hippies who popularized that idea.

In that 1958 film, the lead was a professor distracted from his classroom duties by higher research; here, they’re students distracted by their extracurricular social activities, which certainly seem more important than their schoolwork. In the case of protagonist Toni, she’s a journalism major, but she spends all her time at the campus newspaper office and the computer lab, not in class. And how quaint are those early CRT computer terminals! Awwww! 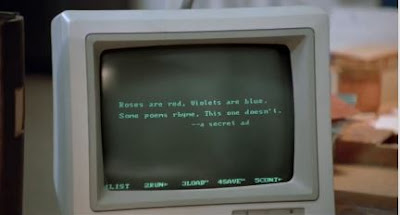 Like Monster on the Campus, many of the horrific events center around the science building, but not because of instruction or experimentation. The dangers are no longer centered around science itself. Instead, it’s a large, empty place where a cafeteria worker can moonlight taking nude photos of female students, who are openly motivated, at this stage in the ‘80s, by the difficulty of paying for college. There’s one significant exception who probably didn’t need the money, but it’s hard to say for sure. Wealthy parents controlling their kids by controlling their finances isn’t a new story either.

One thing I appreciate about Rush Week: it contains actual female friendships, and recognizes that the characters involved in sexual "transgressions" are motivated by financial need. The roommate of the sexy first victim (last name McGuffin, by the way!) sincerely worries about her, describing her as a responsible young woman, and is reluctant to reveal her friend's sideline in amateur porn, knowing she’ll be judged negatively for it. New student Toni is immediately befriended by Jonelle, who introduces the audience identification character to the campus and its various groups. Thanks to film conventions, when she first appeared, I half expected her to be a “bitchy girl,” but this film didn’t have one! 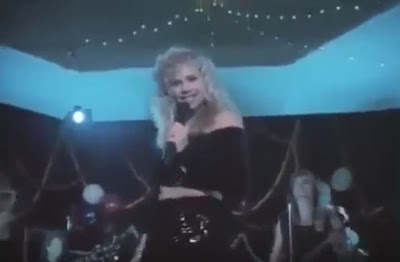 Jonelle's an attractive blonde with big hair and bedazzled clothes, and a boyfriend in the frat, but she’s also the computer expert who explains “back doors” to Toni, and later hacks into the university’s system to warn her of potential danger, before showing up with a whole cavalry of people from a costume party to rescue her in the last act. Not only that, but she sings with the band at a frat party (LINK!); a fun featurette with actress Courtney Gebhart on the Vinegar Syndrome blu-ray talks about this as one of the highlights. The famous L.A. punk band the Dickies also appears, and “Baby Doll,” the parodic Devo pop song featured in Tapeheads, is also heard in the background, so I like to think these films take place in a shared universe.

In some ways I wish the fun-loving and multifaceted Jonelle were more the focus than Toni, although that’s not the fault of Pamela Ludwig, who’s fondly remembered, especially, from 1979’s teen rebellion classic Over the Edge. As the most serious and stolid character, Toni comes across as something of a straight woman to her campus peers. She’s hampered, too, by her relationship with frat president Jeff (Dean Hamilton), a red herring who’s never called on his awful behavior in condoning his frat brothers’ cruel pranks on a prostitute, which, in the worst of frat boy stereotypes, they do just because they can. When the young woman goes missing and Toni worries about her, Jeff says, “Hey, she’s just a hooker,” and she should have dropped him right there. 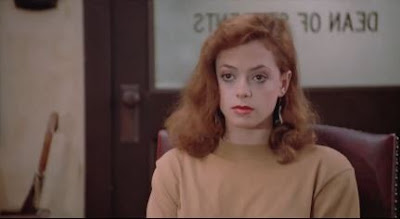 Their relationship is especially frustrating since he's rude to Toni from the start, immediately telling her “you’re too intense.” He cuts down her ideas, telling her to “wake up. This is real life, not some stupid horror movie,” and “I told you not to get so wrapped up in this.” Even though there was an unsolved ax murder on campus the year before, and he knows she’s onto something! If he was concerned for her safety, he could warn her about that! But nope, he just constantly tells her not to follow her instincts, and not, in a sense or be herself.

In response, she overlooks his Jekyll/Hyde qualities, gives in to his persistence, and out of nowhere says she’s falling in love with him. He might not be the killer, but the fact that he’s such a plausible red herring is still a red flag about his potential as a boyfriend.  He’s also involved in the film’s gay jokes, which are unfortunate but certainly period-appropriate.

I do like the scene where the two have a date at a campus hangout, because it brings back fond memories of places like Minneapolis’ Valli Pizza, all of them long-gone, and Jeff’s musing about how for the students, “most of ‘em have no idea what they wanna do with their lives.” While his frat house seems to be 100% dedicated to crazy pranks and mooning, there's one interesting aspect in that Jeff’s heart really isn't in it anymore. His best friend has to keep nagging him to do the responsible thing by taking part in fun and debauchery, where he presides over the ceremonies, announcing “I sever the bindings of social constraint.”

This brings up a question of what that even means. The frat's resistance to social constraint is itself ritualized, a tradition, and it’s the authority figure on top of the org chart who is actually freed from social constraint to the point of ax murder. 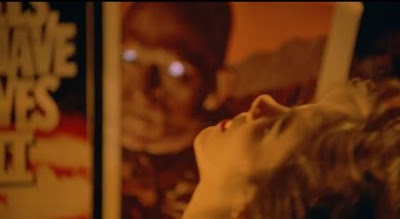 This all made me think of the apparent decline of frat culture, at least anecdotally, and certainly locally. My own alma mater had eight Greek organizations and one home-grown fraternity in 1970, seven of which had free-standing houses right next to campus. I couldn't find an official count for the '80s, but as of 2021, there are three Greek groups, none of them with a house.

The social upheavals of the ‘60s clearly affected the popularity of Greek life, which then saw a revival in the ‘70s; a frat house like the one seen in Rush Week would probably have gotten their ideas from movies like Animal House as much as from local tradition. By this time, there was a lot concern about alcohol abuse and hazing. As late as 2020, AHS: 1984 includes a fraternity hazing death in one of the characters’ back stories, so this still comes up in pop representations, although social and economic changes probably do more to influence the decline of interest among new students.

Overall, while there are certainly slashery elements, like hooded guys committing ax murders, Rush Week's plot gives it more of a mystery/thriller feel, creating more forward motion than some of the more bare-bones slashers do. I’m not arguing that it's real lost masterpiece, but it was still a fun new discovery. Sometimes “You need something new, yes you do,” as Jonelle sings at the frat party (voiced by Addie, of the Addie Band). 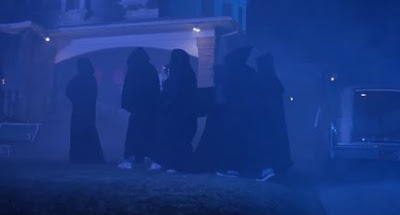 It's clearly unsatisfying for some viewers, with a frequent consensus that the movie fails because it’s fairly tame, with fewer, less graphic, and less creative “kills” than other slashers. However, the idea that this is the primary way, or the only way, to judge a slasher film seems like a limited view of the genre, one that plays to stereotypes about lowest common denominators. I’m probably in the minority, but I’ll go on blithely assuming that’s not the case, and that other people might enjoy a competent film with decent acting and a baseline of suspensefulness.
Director Bob Bralver was most well-known as a stunt man and stunt coordinator, who did some actingand started directing TV shows. Rush Week was his first full-length film, and watching the Vinegar Syndrome release blu-ray, I was fairly impressed. For a mostly unknown film, it looks GREAT! 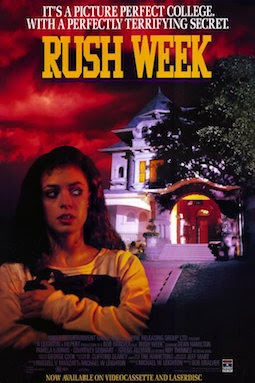 Posted by Anarchivist at 6:10 AM