Where the Good Folk Meet

"You don't belong here."
"Well, aren't you jumping to conclusions."

I love cautionary tales. Show me a period piece about how the most trivial transgressions lead to ruin, and I'm in heaven. Even though -- or maybe because -- I've never listened. But here, something looks like it's going to be a cautionary tale, and instead turns out to be against "call(ing) it sin to have a little fun," as one song lyric goes, and that's even better. 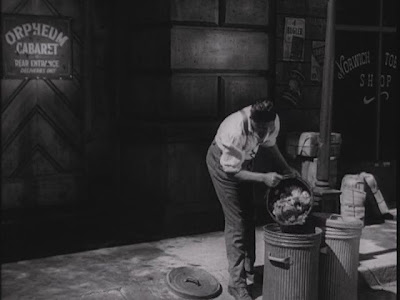 On my trip to New Orleans in November, I was awake and at Cafe du Monde for coffee by 6:30 every morning, and I was enthralled by the absolute army of people taking out garbage and cleaning the streets. So when New Orleans shows a guy taking the trash out two minutes into the film, it certainly struck me as the authentic touch.

If you're ever inclined to look this movie up, it's probably going to be for the same reason everyone else does: for the wonderful musical performances by Louis Armstrong, Billie Holiday, a shoe-horned-in Woody Herman, and other less-famous but revered jazz greats. I'm certainly no expert, but even I was thrilled to see Kid Ory. Or else it's to see Holiday in her only acting credit. When you do, you're going to encounter two continually mentioned criticisms: first of all, it's corny. Yes, that is true. It was made in 1947. Nobody is going to take, say, the dialogue for realistic. Get used to it (it's kiss or kill).

The other issue is, yes, again it's true. We would all rather a film focused on Armstrong (who plays himself, albeit in a fictional version of his story) and Holiday (who plays a specifically fictional singer named Endie). That would be much more interesting than the tale of bland white nightclub owners and patrons that's in the forefront. Sadly, though, I don't think the movie we want to see could have been made in 1947. And if it had, it would have probably been considered a "race film," shown only in segregated theaters to black audiences, and never preserved.

Remember, this is the only movie we've got in which Billie Holiday performs (apart from an obscure French film, and one "short" credited). So although she reportedly hated the role, it's one of those cases where we're lucky to have anything at all.

But anyway: back to taking the film on its own merits. It begins with a wealthy matron who's happy to stay up all night gambling in a swank joint on the wrong side of town, but she doesn't want her sheltered daughter Miralee to go anywhere near it. Fortunately the daughter, who's been conveniently off training as an opera singer, has new-fangled ideas, and is deeply impressed with her new maid's singing -- as she should be, because her maid is Billie Holiday. When told that "young ladies of quality don't visit Basin Street," an acquaintance tells Miralee that she might be able to accompany a gentleman on "one of his slumming parties." She replies, "Sounds much too patronizing," and instead talks Endie into taking her on a girls' night out. 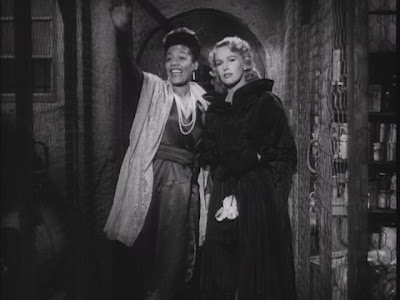 Once in the back room of the Orpheum Cabaret, where Holiday sings with Satchmo, Miralee scoffs at the idea of needing a chaperon, and it seems clear that she's humoring Nick, "the King of Basin Street," when she allows him to treat her like a "girl" and send her home. But not before she's discovered that the respectable symphony conductor who's been overseeing her opera debut sneaks off at night to play ragtime.

"You can't lock it up!" the conductor emotes. "It's as though I had caught some virus. Except that a virus makes one ill, and this music doesn't make me ill. It makes me feel very well. But mixed up!"

You can watch the iconic performance of the song "New Orleans" here.

There's going to be more plot, about the closing of the "Historic Basin Street Area," more commonly known as Storyville, by forces of "public decency," who are really fueled by the desire of a few people, rivals of Nick's, in this case, for personal gain, and enabled by hypocrisy. In other words, a timeless tale. There's also romance with Nick, but he's right, she's more drawn to the music than she is to him. I couldn't invest in the melodrama about whether he was going to break up with her in order to save her reputation, until he made something of himself, yadda yadda.

I just wanted Miralee to get her chance to sing with the band! Because the story is really about the moment in time when jazz was embraced by white people, exemplified by the proper, but modern, Miralee. 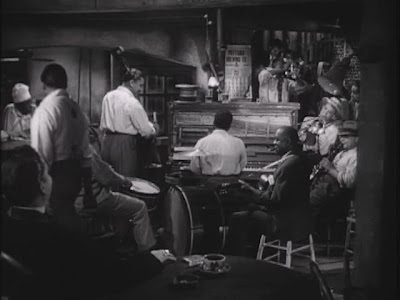 The experience of hearing a kind of music you've never heard before, and falling in love with it, wanting it to be a part of your life, is something that's rarely depicted. I mean, there's that scene in Almost Famous when the kid starts listening to his sister's albums. But I certainly didn't expect to find this theme so prominent in a story from the 1940s, with a young woman as the protagonist, and it's awesome.

"I feel I'm exactly where I want to be, and on my way to where I want to go, for the first time in my life," she says. She argues that classical music was new and original once, just like jazz is now. At this point, the movie pointedly doesn't address the race question as a factor in why this music in particular is considered disreputable, or not for girls like her. Eventually, as the film hurried through, jazz would sweep the nation, despite one commentator declaring "It is a sad commentary on the youth of America." Again, some things never change!

Audiences eventually come around to Miralee's way of thinking, and when they do, it's a dubious victory, as well-dressed concert audiences politely cheer a pretty white girl singing "Do you know what it means, to miss New Orleans?" (Tellingly, I couldn't find a single clip of the performance by star Dorothy Patrick on YouTube). It's gentrification, right before our eyes.

On the plus side, we also get this: 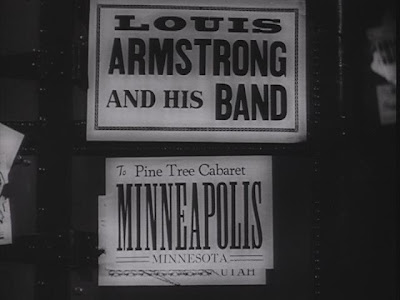 Despite its emphasis on the white jazz fans, the film has made no bones about the fact that the music was primarily made by black people, for black people, and for anyone else, white or not, who could appreciate it. Louis Armstrong and his band are clearly depicted as having contributed greatly to American culture. The black characters are treated overall with dignity and respect, and the white government is shown treating the working-class black community appallingly, as in the beautiful "Farewell to Storyville" song seen here. Without the musical performances, it's likely that this movie would have been long forgotten, but for fans of New Orleans and its music, it does have its charms.

For a more serious take on race relations in New Orleans, both good and bad, I highly recommend the documentary Fauborg Treme. It's only about an hour long, and if you can get through it without tears, you're a tougher person than I am. But who isn't?
Posted by Anarchivist at 9:23 AM