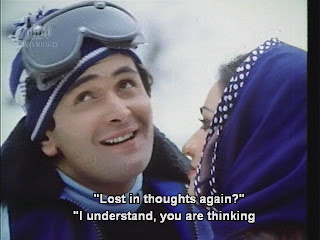 (By the way, I KNEW I recognized these outfits from somewhere).

I really had no idea what I was getting into with Badaltey Rishtey (1978), but I was delighted to revel in the enjoyment of Rishi Kapoor, at his baby-faced best, getting to play the bad guy, at least for a while.

Pretty music teacher Savitri (Reena Roy) meets hard-working but happy-go-lucky Manohar (Rishi) in scenic Simla. Every glimpse of view out everybody's window made me swoon! Eventually, he wins her over, as Rishi will. Meanwhile, Sagar, the brother of one of her students, comes to town, and he's totally smitten with her voice, among other things. He's rich, he's handsome, he's Jeetendra, and although Savitri's family lives in genteel poverty, his family is thrilled with the match.

A run of bad luck brings down the heroine's spirits, and poor Reena spends the second half of the movie looking melancholy: 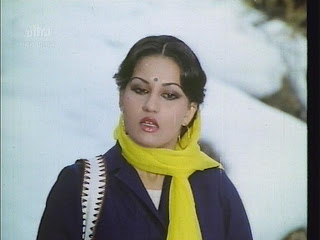 When she initially refuses Sagar's proposal, her mother collapses, and the doctor blames Savitri for causing her tension; Manohar ends a romantic song about their future honeymoon by wiping out on skis and whacking his head on a tree, ending up in the hospital; and when she bows to the inevitable and marries Sagar, her new husband drives a car off a cliff on their wedding day, which upends and bursts into flame! (Fortunately, he was thrown free). All this angst is complicated by an astrologer's prediction that the man she marries will die within 40 days, but that she'll marry again, the second time happily.

Jeetendra scoffs when he hears about his supposed fate, and cheerfully marries her anyway. (The brass band that meets the newlyweds, by the way, plays "Jhoot Bole," from Bobby!) Just in case, though, he vows not to touch his bride until he's safely passed the 40 days. 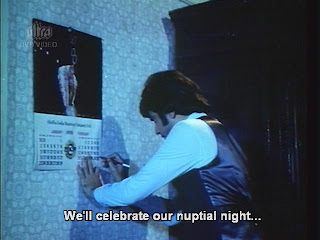 Feeling guilty over Manohar's eventual broken-hearted decline, Savitri writes a "shameless" letter, revealing all about the prediction. At her brother's wedding reception, Manohar, who's been the life of the party, decides he's not going to leave it up to fate: 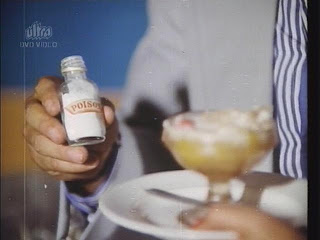 Gasp! I was honestly startled by this unexpected turn of events.

Savitri manages to thwart this effort with song, but she can't stop the two men from becoming friends without betraying herself. 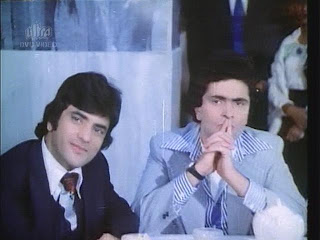 The normally reserved Sagar says that peppy Manohar is "a magnet! An absolute magnet!"

"Jumping Jack" Jeetendra was subdued and likable in what I kept thinking of as the Ajay Devgan part. Rishi, of course, deserves a Lifetime Achievement Award in Cheerful Puppy Love, and he's good at it here, but he was also quite convincing (and much more fun) when full of smiling duplicity. Of course, the things that are not as they seem really aren't as they seem -- this isn't exactly a hard-hitting film -- not that I want to spoil any surprises.

There's another villainous Rishi film out there called Khoj -- a Ramsay Production, co-starring Naseeruddin Shah, with a Bappi Lahiri score. This sounds like a whole new level of awesomeness; sadly, one that's only available on VCD. More motivation to study the Hindi!
Posted by Anarchivist at 9:46 PM

Umm... Was Jeetendra magnetised by Rishi? That would be something - Jeetendra forsaking Reena for Rishi! :D

The more I see of Rishi, the more I am convinced I need to see more of him. But sadly, he has a lot of bad stuff. I remember hearing about Khoj - it's supposed to be an adaptation of Agatha Christie's The Murder of Roger Ackroyd. Only the fact that it is from Rishi's sweater-wearing days, and also stars the likes of Kimi Katkar, keeps me away.

Yes, the sweater-wearing days were hard on all of us.

And actually, Jeetendra did almost seem to have a crush on Rishi. He was all like, "Wow, what a fellow!" Which would have been an awesome twist that was, alas, not to be.

It occurs to me that my crafty husband could help me make actual Rishi magnets. Hmmmm....

I just don't much feel the Rishi love :( (or the Jeetu love either). Sigh.

LOL@ the "Ajay Devgan role"--good one!