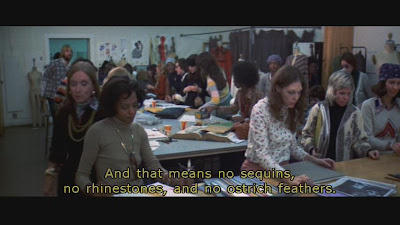 Oh, come on. Would life even be worth living?

For all that I gripe about Facebook, I have to give it credit: a comment there by friend and one-time Secret Santa Irene Nexica reminded me that I'd never actually seen Mahogany (1975), although I loooved its moody theme song ("Do you know where you're going to? Do you like the things that life is showing you?") when I was a little girl.

It all starts with the kind of insanity on the catwalk that I haven't seen since Rekha's turn as a high-fashion model out for vengeance in Khoon Bhari Maang. 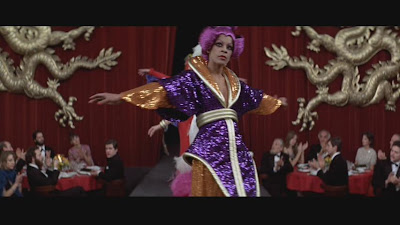 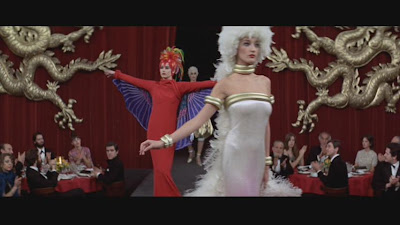 They're throwing this at us before we even know who the characters are, and it's like a fashion show from the Star Wars prequels. Naboo is the only place I can think of where these clothes would make any kind of sense. But the craziest thing about these outfits is that they're only the beginning!

After this "Kabuki" debacle, the word "success" is uttered to Tracy (Diana Ross), the fashion designer responsible, throwing her into confusion and a film-length flashback about the struggles of a girl from inner city Chicago to find success. She works for a department store by day, and takes design classes by night, where she's scolded for her outre work.

At several points, Tracy's reminded that she shouldn't set her sights too high in Chicago -- partly because of racism, but mainly because this isn't where you "make it," it's where you "end up." I couldn't help thinking, hmmm, what does that make North Dakota? Best not to speculate.

Eventually, though, she meets two important men: suave and sexy Billy Dee Williams, who's a political organizer fighting against greedy landlords in the 'hood, and (actually kinda sexy too) Tony Perkins as the jaded photographer who's going to turn her into a famous model, rechristening her "Mahogany." He's first impressed when he sees her in a dress she designed, and chats her up about the sophistication of Rome. Because of this? 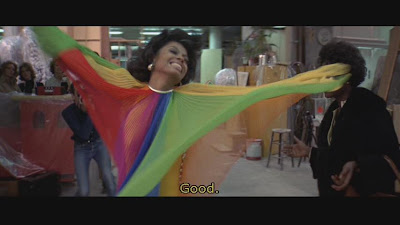 Well, eventually the film will take us to Rome, and we'll learn that their parties in the '70s were as full of bad disco as everybody else's, so I'll take their fashion sense with a grain of salt.

The film clearly prefers Williams, with his talk about social conscience, and his selfless working for the little people versus the frivolous world of fashion, but what plays out on screen is largely a man putting his dreams and ambitions over his woman's, which makes him kind of a dick. When Ross helps him with a campaign, she uncovers one of her drawings on the refrigerator, and symbolically covers it up with Billy Dee's handsome face. The symbolism is complicated, for me at least, because it's a drawing of that same rainbow dress. 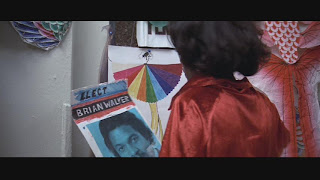 Eventually, however, Tony Perkins tempts her to Rome. For a while they work in a good creative collaboration, but it's at the cost of turning her into an object of fantasy. Then there's the sad fact that when a guy wants to sleep with you to prove he's not gay, but then he can't go through with it, it always puts a strain on a relationship. (One has to wonder if this role hit close to home for Perkins, who's generally acknowledged to have been gay, and also sincerely happy in his marriage to model Berry Berenson). Of course, Tracy's standard pillowside speech about how it doesn't matter, and there's more to life than sex, has all the more conviction because she didn't really want to do it anyway.

Before all the angst starts kicking in, though, we get this: 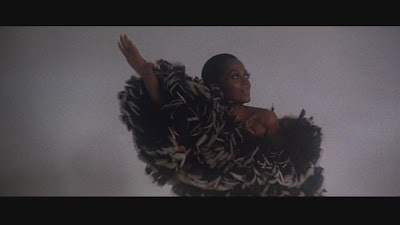 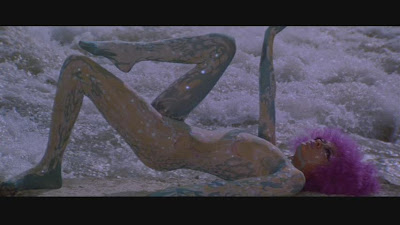 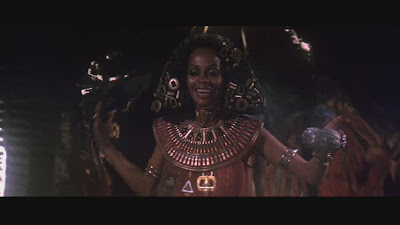 Which are all from the very same montage! Okay, to be fair, Ross isn't always ridiculous-looking in the film, but is also quite beautiful: 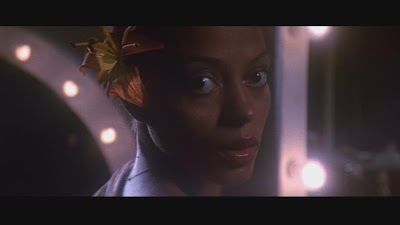 Also in its favor, the movie has a nice retroactively period-piece quality, with its glamorous, photogenic stars walking through rubble-strewn Chicago streets. (Amusing, since at one point, Williams' activist gets angry about the exploitative nature of a fashion shoot in a ghetto neighborhood). Plus, at one point we hear a radio broadcasting from "WVON, the Mighty 1390, Chicagoland's Black Giant," which is awesome.

Reviews on the IMDB range from "this movie is awful!!" to "THIS MOVIE WAS BRILLIANT," and that actually gives you a pretty fair summary. There's also a great "favorite outfit" thread -- the sort of thing one finds on the Internet that makes one think, thank Rishi, I'm not alone! It's probably obvious to everyone where I'd fall on this question. The song asks "Did you get what you're hoping for?" and the answer is yes, yes, yes!
Posted by Anarchivist at 12:15 PM