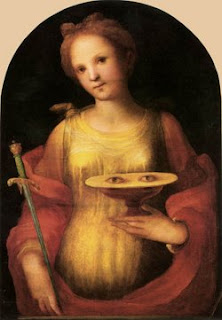 I had an eye exam yesterday; something I'm always very trepidatious about. You'd think wearing glasses for over thirty years would have hardened me to the reality, but no. Fortunately, the new eye office at the local medical megaplex made it pretty painless. (Except for that lingering vampiric sensitivity to light). I have a quarter degree worse astigmatism in one eye, and a quarter degree worse near-sightedness in the other. So the doctor doesn't think the new prescription will be the big shock it sometimes is when I've waited too long.
Also, I found some fun new frames.
For the interested, one of the saints associated with eye afflictions is St. Odile (or Odilia), who was born blind, and whose "attribute is a pair of eyes on a book," as the Wikipedia puts it. (http://en.wikipedia.org/wiki/St._Odilia). It doesn't say whether those eyes are two-dimensional or three, which makes a difference in the connotation. Either way, her feast day is the day after my birthday, so I've gotta think she's looking out for me.
Then there's St. Lucy, patron saint of the blind, whose eyes were gouged out as part of her martyrdom. Her feast day is the same as St. Odilia's, as if the medieval church declared some kind of official day for the visually handicapped. The painting is from 1521, by Domenico Beccatumi, and would be right at home in my Bohemian Gothic Tarot deck.
She's the same saint they celebrate with the sweet "Santa Lucia" song we sang as little girls, while wearing crowns of fake candles. Funny, nobody ever mentioned the eyes on the plate, which is obviously the most interesting part of the story...
Posted by Anarchivist at 7:36 AM